I’ve noticed a few metadata issues with Albums in the ROON App and the display on my Akurate DS.

Example: I have an Album which is a collaboration between artists, so it should show A+B on the display.

However, It appears my Akurate DS shows the metadata from KAZOO app, which I think uses the Qobuz DB for album naming so only Artist A is shown, B is missing. (which is wrong) this is replicable whether the album is from Qobuz or from my SSD.

I’ve tried to edit the metadata on ROON but the problem still persists,

Is there anyway to resolve this? Is this caused by my Akurate DS being Roon tested and not Roon ready?

I’ll try to check this later (I have a Linn Klimax here and a Selekt at a different location), but my guess is that the Linn streamer is using the ID3 tags embedded in the track, not Roon metadata, which is held separately in the Roon database. You could verify this by using an ID3 tag editor on the files for that album in your SSD.

I suspect this is due to the Kazoo server unable to see the SSD where I host my music collection - I’m using ROCK, so this just defaults to Linn/Kazoo metadata.

It would be good to know if your Klimax/Selekt are displaying similar.

This seems to be a Linn problem over metadata issue - moving to Audio Products / Linn queue.

So with some further investigation - This may indeed be a metadata issue.

Metadata issue is that Roon and Kazoo show different metadata on the DS display.

If I play an album via Roon the metadata displayed on the Akurate DS is wrong, (see Image 1) when I play same album via Linn Kazoo app it is correct. (Image 2)

The Album is a ripped CD on my external SSD - Both Kazoo and Roon can see this same folder, there are no duplicate instances of this album.

I am able to replicate this over several albums - and it’s always albums with collaborations/duets, 1st Artists is named, 2nd is not. 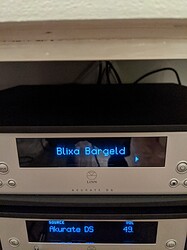 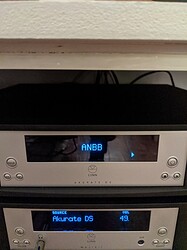 Has anyone seen this type of behaviour on their setup? Any solutions to fix? Is this a Linn issue or Roon issue? please note I’ve already tried to edit the metadata in roon but this does not resolve the issue.

In my experience, Kazoo uses the metadata embedded into the ID3 tags in the digital audio flies, as served by whatever UPnP/DLNA server you are using, I believe Kazoo Server in your case. Roon uses the metadata it has assembled from various metadata sources for the albums it has identified. By default, Roon uses embedded metadata only for album identification, but then it relies on its own sources for the actual served metadata. So, it’s possible what Roon has assembled disagrees with the tags embedded in the music files. Sometimes it’s better, sometimes it’s worse. You can ask Roon to use embedded tags for a particular album in Album Editor>Metadata Preferences. You can also adjust this for all Roon imports on Settings>Library>Import Settings.

Thanks for the explanation - I still don’t fully understand how the metadata via the Kazoo Server/App is correct but it shows up wrong when I play through Roon - I was under the impression that Linn had it’s own Roon environment built in to their DS range separate from Kazoo so thought it would use the Roon metadata for streaming.

I managed to fix a few Albums which are ripped, the albums I stream still do not show the correct metadata for collaborations, duets etc.

I’ll move this back to the support queue for now.

Ideally 1 and 2 agree, but in reality they often do not, for a variety of reasons. Briefly, music metadata sourcing, either from metadata providers or from embedded tags, is pretty noisy. Roon tries to alleviate that in 2 by merging multiple metadata sources, and also by allowing users to prefer file metadata, but it’s still not perfect.

Starting to make sense - I’ll go have a read up on this in more detail.