I’m having issues with Roon commingling song versions from different discs in a Kinks Deluxe Edition 3 CD box set and getting confused with Mosaic box sets (among many other issues). Is this worth delving into or should I await the impending metadata fix slated for a later Roon update?

How are the tracks tagged for disc number and track number ? If these are distinct then Roon shouldn’t co-mingle.

They are tagged for disc and track number (via CDDB) and are organized fine in iTunes on my Mac and iOS devices but Roon misassigns the disc they belong to. Example, if CDs 1 and 2 each have 15 songs (like disc 1 stereo and disc 2 mono), then Roon may show disc 1 having 29 songs commingling stereo and mono tracks and disc 2 having 1 song.

Also, in the case of an 8 disc Mosaic set, Roon is grouping them into two 4-disc sets. Not even a chronological rhyme or reason. Group one could have discs 3,4,7,8, group two could have discs 1,2,5,6. Again, looks fine in iTunes. Just a couple examples.

Would you mind posting a screen grab of the track list with tags ? I don’t know how CDDB presents meta like disc number, but, I have seen Roon struggle with tags that were 1/2, 2/2 instead of just 1 and 2.
Are the album titles unique also between the disc 1 and 2 mono/stereo versions ?

For Roon to clump tracks together like that it usually is caused by some ambiguity in the folder or tag data.

Ultimately, @vova or @eric may want to take a look at an example of the files here to see where the issues comes from.

Okay, so an update. I was wrong about the Kinks Box. Disc 1 was commingling Disc 1 from the box and a single CD edition that I wasn’t accounting for (long story). By adding the suffix [Deluxe] to the box set, that confusion was cleared up. With the Mosaic box set, there was an extra letter in the title of one of the discs, so Roon was deciding to split them into 2 volumes. So, both of these immediate concerns are addressed and were easily resolved. I’ll dig deeper and see if that’s it. One related question, sometimes if I have multiple versions of the same album, Roon will display the “Other Versions” button in the album view and sometimes it won’t. Any thoughts on why that is? Thanks!

Glad you figured out the first two issues. 99.99% of the time it is the file tags that cause the results we see. A quick edit and tidy up is all that is needed. Album title being the usual culprit. Roon cannot fix these things on auto without upsetting a bunch of folks that want to see meta exactly with all the things as they are. When is data misaligned and when is it deliberate?

Of the other versions question…I typically see that “other versions” is only triggered when albums are fully identified i.e. have a good album match. Then Roon can state that album A and B are the same album (even if different versions).

My guess is that whilst you know the albums are equivalent, if they are in a state of “unidentified” then they won’t be seen versions of each other. You can manually make albums by highlighting them and using EDIT/GROUP ALTERNATE VERSIONS.

OK, here’s one. Somehow Exile on Main St. and Sticky Fingers are showing up as a 2-disc set. Will post iTunes and Roon Captures 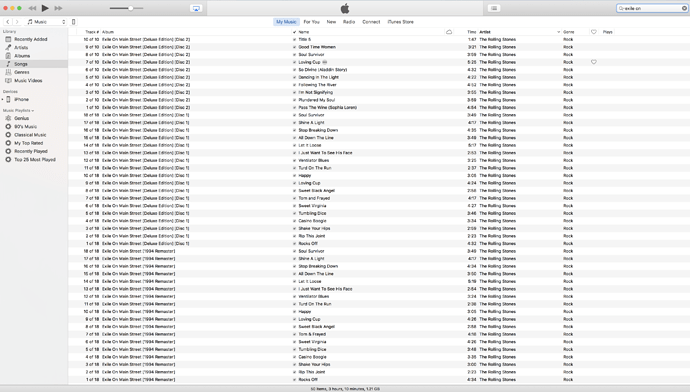 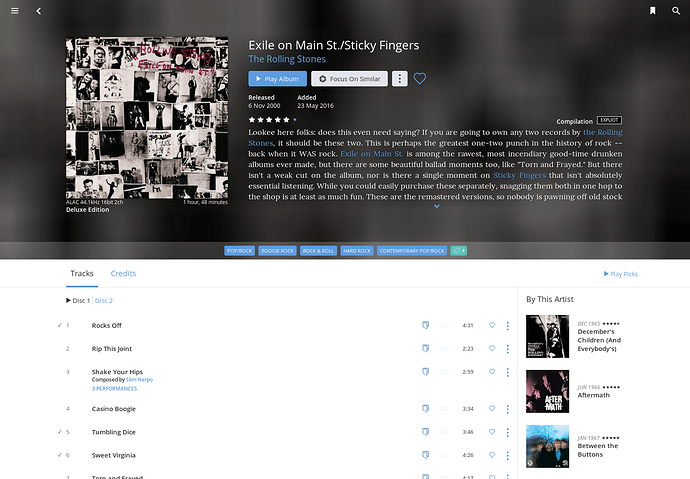 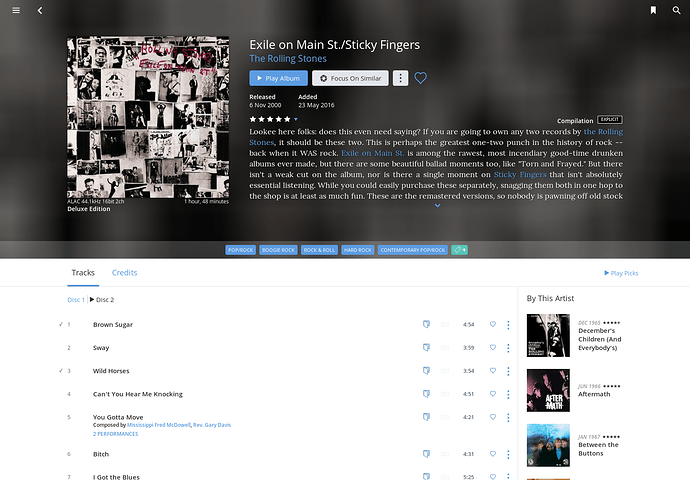 Is the other version of Exile showing up?

This will most likely need a bit of work, moving folders and retagging.

Sticky Fingers is also showing up in Roon as shown above
I have 3 versions of Exile:
The one above
The 1994 Remaster (not showing up)
The the Japanese SHM SACD (showing up)

And thanks for asking. Also, would this best be tackled later after the Roon metadata update?

As you can see here Roon doesn’t like the way that iTunes named your folders for the multi-disc album.

, you can use Roon to separate the incorrect 2 disc set. Then you can then combine the proper 2 albums to create the 2 disc set. This is assuming you don’t want to eventually correct the original folders and tracks.

To be safe, you may want to quit the Roon Core, and back up your Roon Library Folder. Also, backup your Stones music files. *** added by Greg to save my butt if something goes wrong.

If you view the Exile / Sticky Fingers 2 disc album, click on the 3 dots, then Edit and then Fix Track Grouping. Now, on the left, you will see the two discs. Click on disc 2, then click Remove Disc. Don’t worry, it won’t delete the files in your folder. Now, on the bottom right, you can Create Album, assuming everything looks right.

By selecting the Artist, The Rolling Stones, you should now see the albums separated. You can then right click on the proper 2 albums for the disc set, click Edit on the top right of the screen and then Merge Albums.

For fun, and as an experiment, I found a 2 disc set in my library that was properly indentified. I edited it and selected Fix Track Grouping. I then clicked on disc 2 on the left, and then clicked Remove Disc. It now showed disc 1 of the set, with the correct tracks. I Created the album. Now I had 2 of the same album under the artist. One had the tracks from disc 1 and the other had the tracks of disc 2. After that, I selected both albums, click edit, then Merge Albums. I Created the 2 disc set and was back to where I started. Cool, eh.

Greg, belated thanks for this. I didn’t have to use this approach earlier. Fixing naming anomalies in iTunes would usually do it. I did have to implement your approach today for a Mosaic Django Reinhardt box set and it worked like a charm. I don’t think I would have know to Control click on the 2 albums to merge if you hadn’t suggested it. Thanks again! Tim