I’ve not messed about with metadata all that much. A little editing of tags here and there, mostly when I import files. Just a bit ago, I was listening to a track by an artist, and as I often do, I clicked on the artist’s name, just to see if perhaps he was connected to some music I wasn’t aware of. Well, I was surprised to see an ‘appearance’ on the album 2112 by Rush! The artist is Nick Beggs, a bass player who came to prominence in the early '80s with the band Kajagoogoo and then resurfaced as part of Steven Wilson’s band. He did not play on 2112. So, I look at the credits for 2112, and low and behold - the rest of Steven Wilson’s band is there as well, along with Taylor Hawkins and Dave Grohl from Foo Fighters, all of Alice in Chains…you get the picture. 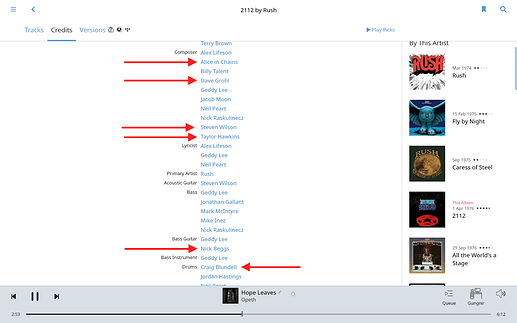 This comes down to the data being provided by the various sources Roon uses to bring all this together.

So, to an extent it is a case of ‘garbage in, garbage out’.

I have the 2112 record and see the same set of credits in Roon. I did a bit of digging around to see if I could find the source for any of this.

Interestingly, Musicbrainz quotes ‘Tears’ by Alice in Chains as an associated release, which probably explains why they are listed in Roon.

Basically, the only way to get it sorted is to correct the underlying source data. The Roon staff are able to feedback to providers to fix some problems.

Also, the general public can submit corrections to places like Allmusic and Musicbrainz