Yes. I have a Blue Jeans CAT6 from router to microRendu at the moment.

I am using a 2014 Mid Macbook Pro wuth 2.8G i7 with 16GB RAM and Apple 1TB SSD.
At first, I thought my DSD file download from Native DSD Music may have been corrupt.
That did not make sense as the dropouts happens at different points of the track.

I do know that my DAC plays DSD256 files perfectly under Windows when directly connected to my MBP with DSD tracks on the MBP.
But this does not sound nearly as good as the microRendu. This is really the only motivator.
Thanks

The Netgear gigabit switch arrived yesterday and the dropouts persist with DSD128 and DSD256 tracks with the microRendu.
In fact, with some DSD256 tracks, the duration of certain dropouts are much longer.

@paul_chiu ----- Thank you for your feedback and I am sorry to hear that this issue is continuing. Can you please describe, in detail, the topology of your current setup with the newly integrated Netgear gigabit switch.

Also, I’d like you to run a very simple test. Could you please move some files that have been giving you an issue over to your core machine onto the internal hard drive and try to play them back? Are you getting the same results?

I tested with 4 Macs and a Dell over the weekend and this was the setup. 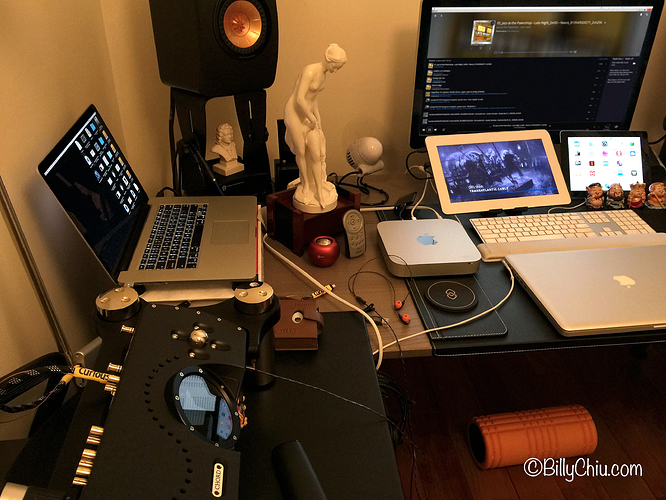 Using MACs, I tried 4 different OS versions from 10.7 to the latest 10.11
With each, the MACs were all clean installed, thus removing all other 3rd party processes (that I know of)
(Note: My testing lengths are based on 30 minutes runs of each file format type, ie 44.1, DSD64, etc)

Running Parallels with MAC OS 10.11, Roon running as Roon Windows played DSD128 files without dropouts and DSD256 with very few dropouts. BUT, with most DSD256 tracks, the beginning 2 seconds had noise. I tried restarting the same DSD256 track, I get that starting static or noise every time.

I did try putting the DSD tracks on the MACs, on internal SSDs, inside the NAS BOX as well as on external SSD drive boxs connected to MACs directly or to the NAS box directly.
In the case, where the DSD tracks were externally connected, the dropouts and pauses were more frequent.
The best results (less dropouts, less static and less pauses) were when the SSD tracks were stored internally with the computers.

Please let me know what else you need to help make this work for my system.
Thanks Eric

Hi @paul_chiu ----- Thank you very much for all of your feedback and your provided screen grab. This information is very appreciated, especially while trying to troubleshoot issues. Some thoughts on your most recent report:

I’d like to get a better understanding of your audio settings in roon. Can you please provide screenshots, based on the examples shown here, as this will help to further eliminate variables that may be causing the issue you’re experiencing.

In regard to trying to playback DSD512 content, roon does not currently support DSD512 content and that is why you are experiencing “just pops and noise” on your Macs. While there is no firm timeline set in place, DSD512 playback is an eventual functionality goal down the line.

Here, I disable any background analysis of the tracks. I had it on previously. 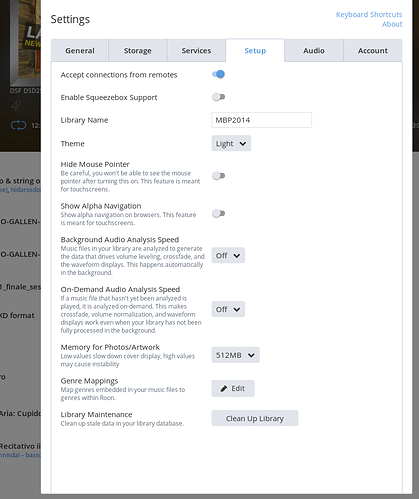 This is the microRendu setup
I tried playing with the delay timing, it really made no difference with the starting noise as well as un-predictable dropouts during play. I also try alternating between up to DSD256 and disabled. 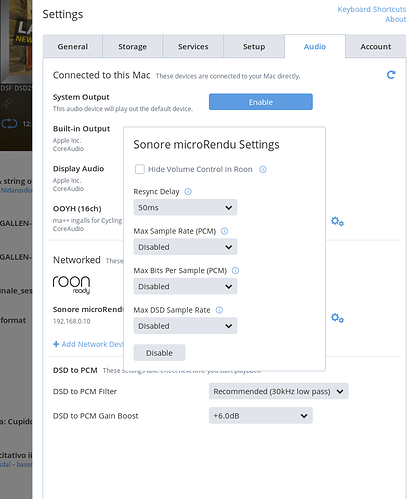 There really isn’t that many variations in settings. I think I tried them all.
Did the error log I post a few days ago helped?

Paul, I have been reading this thread. I understand you wanting to try different things, but you need to simplify the entire system IMO before you continue to . Please select your best computer and turn off all other computers. On the computer that you select turn off all unnecessary applications (especially Parallels / Windows) and have only Roon working. Remove the microRendu from the network and get playback working with Roon to your DAC first and foremost without drop outs at all rates. Then and only then add back the microRendu and attempt streaming. You need to recheck the settings in Roon when you go back to direct connection to your DAC. Finally, you might want to check if there is a firmware update for your device.

Thanks for your response. Roon 1.2 was working with my main Macbook Pro direct to two of my DACs before the microRendu arrived. Playing up to DSD256 seemlessly.

I agree with you that simplicity is key. This was why I spent the past weekend reinstalling OS in my Macs and PC so that nothing extra were installed.

At this point, I am pretty much out of ideas. Yesterday, I spoke with Andrew Gillis about swapping my microRendu with a new one. We wonder if my microRendu unit may have a bug.

microRendu sounds too good to give up.
Any more suggestions are welcome. Thanks.

Maybe I misunderstood the posts above. I’m not sure a swap will make a difference because the hardware and software will be the identical. What we need is Roon to comment on your log. In fact, you may want to redo the log with the simplified setup. Also, I sent you an email with something else to try, but I don’t want to post about it here.

In regard to trying to playback DSD512 content, roon does not currently support DSD512 content and that is why you are experiencing “just pops and noise” on your Macs

Interesting that it tries. Perhaps it would be better to report its an unsupported format?

Thanks. I will look for it.
Paul

DSD512 does not work with JRiver Media Center either.
Do you know what player currently supports DSD512?

Interesting development today when trying to use Roon and mR. The DAC would show signal passing to it, yet there was no volume. After trying many reboots, power downs, checking software and hardware setting, etc I went in to mR settings to Roon Ready settings and changed the volume from None to software and then back to None (volume 100%) and this resolved the issue. Seem like it was somehow “stuck” at 0% and toggling it resolved the issue.

I love the Roon HQPlayer microRendu setup. I did however have a specific minor malfunction a few times. The player would play the music at a slightly accelerated rate (think 34 rpm, instead of 33-1/3). An ever so slight, but noticeable change in tempo from music/vocals I know well. Not sure where the issue lies, but a microRendu re-boot immediately corrects it.

How is your problem with Dave & Roon ? I think I may have similar one ^^:

Hi all, I’m suffer from random playback problem, where the sound playback will randomly become either 1. high freq noise only, or 2. highly distorted music. It happens randomly when playback switch to a hd sample rate media, for example 24/96 or DSD64 etc, if switch from a hd media to 44.1k sample rate media, it will not occur, seems there is communication error when switching sample rate. I can fix the noise by select “next” on my iPad Roon app to skip to next song until a different sample ra…

Some background: I just ordered a microRendu (and waiting for it) to replace a laptop. DAVE made such a great difference just by itself, it was hard for me to imagine it could get any better, until I started reading posts on microRendu. I hear ad difference with microRendu, I may get the CAPS LPS later.

I know there are a lot of posts on Head-fi, but wanted to get the view of Roon/HQP users.

Just installed MicroRendu with Audioqest Dragon Fly red
SO much better than playing through my IMAC 2016 which was last end point in my computer and primary listening room.
Small Green Computer sent me an IFi power supply with an open box and missing adaptor.
Jesus in support worked late one night to get me an immediate replacement.
Great support.

Just enjoying my music and contemplating my next microRendu endpoint in the future!!