I noticed Microsoft have a 10% sale on their surface dial and I was hoping you guys could easily integrate this into Roon. I would love to be able to use this as a remote for Roon control. It would be awesome just controlling volume with it as a bare minimum. 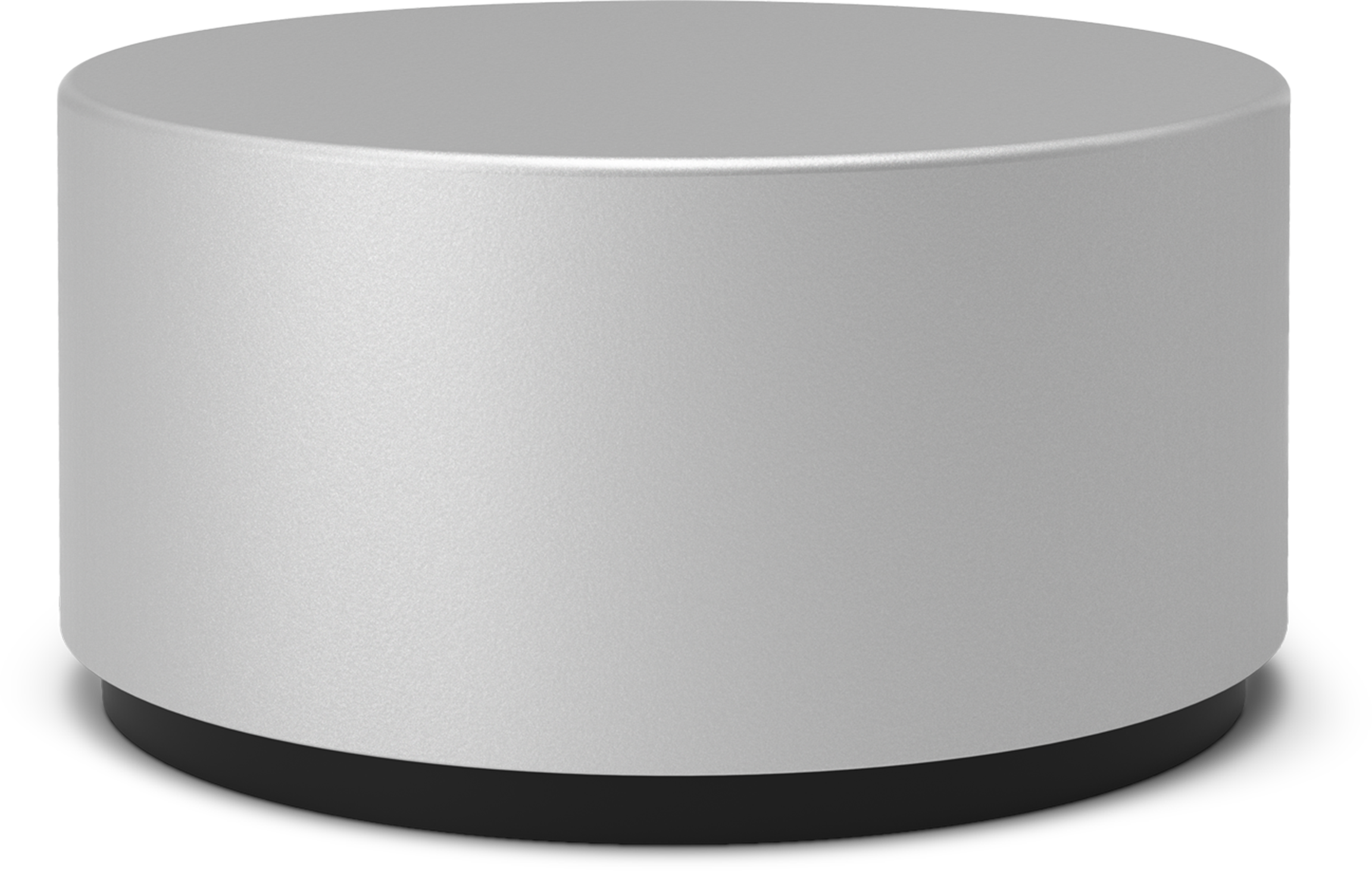 Get the Surface Dial at Microsoft Store and compare products with the latest customer reviews and ratings. Download or order for delivery for free. Free returns. 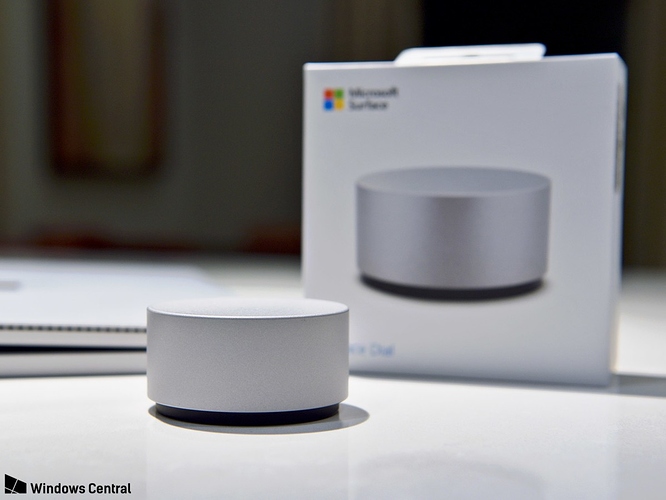 @support really sorry to tag you guys especially when this isn’t a support issue but I don’t know any other way to bring this to your attention and I feel this could be a addition to your application.

Is this likely to happen? If so I will buy a surface dial while they are on offer.

Again sorry for tagging you in this but I am unsure how to bring this to Roon’s attention.

The Roon team believe in consistency across all platforms and won’t add 1 off features for a single platform. It ads a level of unnecessary complication to the shared code base.

Add a pile of one off features for each OS and it becomes a nightmare to maintain and lowers the quality of the product users receive.

I understand and wouldn’t want the core experience diluted. Just thought it would make a fantastic remote control for Roon users using a laptop/desktop as a controller.

Skipping tracks, play/pause and volume from one physical control. This method has worked for devialet and is a unique selling point. 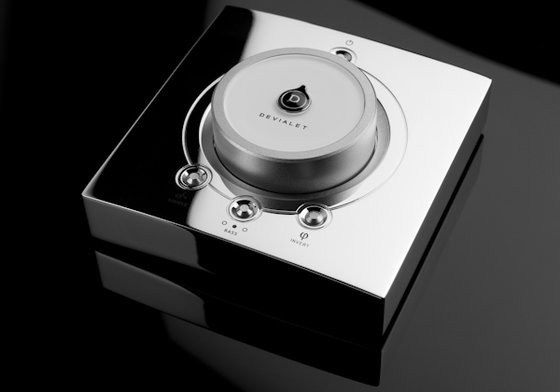 I already own one of these & think it’s a good idea!
I’d appreciate being able to use the Surface Dial as a controller for a certain set of Roon functions…

This thread has had lots of views but nobody seems to agree with me. The surface dial already exists and could be implemented really easily and it would make a fantastic controller.

People surely can’t deny an actual wireless knob you turn is miles better for adjustment than a software - or +.

Can this be done by someone with the necessary programming skills creating something using the Roon API?

I would imagine so but I don’t think it would have the support from the Roon team.

For those unsure watch this short video for a quick idea of what it could do if Roon implemented it right.

I had been thinking of getting one for graphics work, but this discussion and the video inspired m3 to get one.

Just arrived. Immediate result with Roon, without any setup: it controls scrolling, ok in vertically scrolling pages but the horizontally scrolling browsers are too sensitive to the dial, for some reason (no problem with the mouse wheel). No way to get it to control volume, or select an album. (It does control volume on the PC system output, but that’s not interesting for me.)

I ordered one a few hours ago myself.

I read online within windows you can map application specific macros. Very easily I should be able to map play/pause and next and previous track skip.

Roon really should consider this but it seems they dont think its a good idea or I can only assume its user base does not understand what I have purposed.

Microsoft make the dial but leave it up to the developers to integrate it.

One day I hope to leave my laptop on the side and sit on the sofa with the dial only (I listen album at a time).

Have you played around in all the settings in windows? 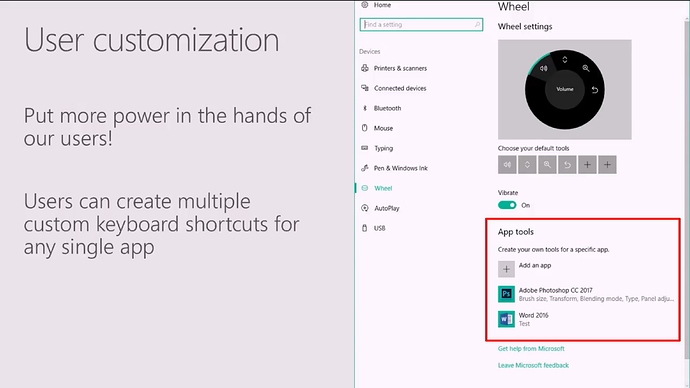 Look into App tools. Its in there you can set your app specific settings for Roon (I hope).

I had three minutes with it, then I had to shop for lunch.

Waiting to see what you do!

Somewhat successful, but then stuck.
I went there, but on my screen the list of exiting apps do not appear.
I clicked on Add an app, selected Roon, and defined two tools, just as a test.
One I called Volume, and it adjusts volume on the playing endpoint (unlike the standard Volume tool which only affects the system output), and clicking is spacebar, to stop/start the music.
The other I called History, scrolls in the history pages.
As I said, the regular scroll action doesn’t work well, so I defined a Custom Tool on the main screen, not an app tool, which scrolls with Up/Down.

And removed the standard tools.
But now I can’t go back and find the Roon tools, to modify them or add to them.
The section you highlighted in Red is missing for me.
Granted, I’m using this on a regular desktop, not a Surface. I’ll go try it on my Surface Book.

EDIT Same problem on the Surface Book, can’t edit the configuration once created. Must be a bug.

Roon really should consider this but it seems they dont think its a good idea or I can only assume its user base does not understand what I have purposed.

It’s a single platform special case that complicates the shared code, nothing to do with thinking it’s a bad idea.

A Roon API solution is the best option in my opinion.

Sorry I not familiar with Roon API code. Do you mean native support? That’s what I would love.

That sounds like a pain to be honest. I am using a HP Spectre X360 but it should be OK as support is for all windows 10 pcs except the on screen functions.

Mine will be here in a few days so I will post my findings.

If successful I will upload a little video to demo it.

Having thought about it some more, I think it will be useful in a limited case: as a volume control and pause button. (Like the Audeze Cipher Lightning cable/DAC, it has those three buttons on the cable.)

The way the Dial works is that you can define various tools, and switch between them by pressing and holding the dial for a second or two. I think this tool switching may make sense in serious tools like Photoshop. But not for Roon: I defined three Roon tools, volume and scrolling in the browsers and history scrolling. But I don’t see those other things as useful enough to go to the trouble of switching modes, mouse wheel or finger work fine.

But a physical volume/pause control is indeed very useful.

On the other hand, it’s for Windows only and I typically use an iPad with Roon,

Thanks for the feedback.

The whole point of this thread was to ask Roon to integrate it into thier software. If they did that it would work flawless. The device would need to support Bluetooth 4 LE and that would be it.

Microsoft themselves have said its down to the developers to integrate it.