I don’t use most of advanced features. Unfortunately, many basic features are missing or flawed, which makes me question my decision to use Roon… In my opinion, their development goes in totally wrong direction.

Have to agree with you regarding missing or flawed basic features significantly detracting from the value it offers. So much so I’ve lost interest in it as a value adding front end and it’s now nothing more than a taken for granted, glorified remote control in my playback chain. It’s used because it’s part of infrastructure, not because it adds value.

Hi guys,
Im’ curious about basic missing features…Because semantic is important,
To me basic features are remote, album displays etc…those are basics to me and i think I use Roon 50% of its capacities.

Of course adding more and more features is important but maybe i miss something but i can’t think about one basic not present regarding other software from manufacturers or even app from 1/3 parties.

Controlling the volume with the phone’s buttons is basic functionality and it is missing. Probably my biggest let down on Roon.

Roon’s UI reminds me of database apps from the 80s, only it has a touchscreen added.

Box Sets handling is the biggest gripe I have with Roon.

Bookmarking where a playlist can continue, unless the number of plays counts the correct number, then one has to search where the played number is one less than previous.

Search results to the album means to find the track yourself, fun if there’s a 4 CD set.

Time remaining counter for a track and/or album.

A sleep timer - how basic and simple is that?

Users/permissions management is a basic feature (since, or almost since, the invention of login);

Yet only one app I know does this is fully which is. Plex, so not unique to Roon so hardly basic or they all would have it.

Vertical scrolling is a basic feature (since the invention of the computers);

Agree on this one

The playlist is a basic (generally wise) and sub-basic (roon wise) feature (since the invention of audio on computer);

Not sure I get this one, it does all the things I expect for playlist management, explain more what its missing here as I just may not use these type of features.

Box sets and collections management is a basic feature for any digital assets management system;

Cant comment on this don’t have any, but I see it crops up as an issue. What app does this well as an example?

Remote playing is a basic feature (since the invention of the mobile phone);

Not basic quite a complicated affair given how Roon manages it’s library and again few apps allow this. Plex, LMS and BubbleUPnP are ones I know off and the latter two are far from secure though. I have Plex and BubbkeUPnP and use the remote access, it works but is not always a great experience.

So give examples of applications that do this better and why are you not using them instead if Roon is so bad?

You can organise your library any way you want using metadata. That’s what focus, tags and bookmarks are for. The normal areas are how the majority of people use or want their music organised.

What database could have had a UI like Roon in the 80’s I don’t recall computers being up to much back then.

Bugs will get fixed if you flag them and they are identified. All software gets bugs bit unique.

What features are missing, are they available in other apps if so which ones.

The one basic feature I believe is missing is the ability to be able to add our own artist bio’s and album reviews directly into roon, like you can do with such programs as Plex, Musicbee and even using Kodi as a music player allow this one simple function. I cannot stand it when roon just has a big blank waste of space on the screen when nothing is there. I would even like it if it picked up on the comment tag in my files as I have my album reviews saved into that tag, at least that would be something. For me the rest of roon works well for how I use it. Just really annoying can’t add what I have mentioned.

There is absolutely no lack of features in Roon - assuming all those features would work as advertised and would be presented in a UI that is fit for the 2020’s. Thats not the case at the moment, unfortunately. Roon still looks pretty much like Sooloos 15 or so years ago.

Biggest missing feature for me is an effective search.

Box sets and collections management is a basic feature for any digital assets management system;

Cant comment on this don’t have any, but I see it crops up as an issue. What app does this well as an example?

For Popular (non Classical) music, Box sets are either:

A) Releases of the artist’s first four years of albums
B) A Collection of an entire career consisting of all original album names
C) A Greatest Hits type compilation spanning over several CDs.

for C) typically the name of the album is consistent all the way through, even spanning over several discs. To group the set of discs together, Roon allows conventions such as disc 01- track 01, ending up with disc 03 track 27 for example, with the same cover.
That’s the easy bit.

For A and B, well, this is where things come unglued. Roon allows only one album name.
Example:
Monty Python - Monty Python’s Total Rubbish - The Complete Collection [9CD Remastered Box Set] (2014)
Consists of nine CDs -
CD 1 - Monty Python’s Flying Circus
CD 2 - Another Monty Python Record
and so on.
Each CD is uniquely named, but there’s no reference to the main title of the box set, unless the user, painstakingly adds the box set title AND the Album name in the Album metadata.
This becomes a real mess as the album title goes on forever, and there’s a conflict of the Disc number of the box set, relative to the actual CD, which title is a one off.
You may have a different version of one of the albums in the box set, perhaps from from 1st issue, MFSL, or an SACD that may sound better, but are an avid collector. The other albums would have to renamed in their metadata, so there’s no duplicate, and this wouldn’t be a problem if Roon could handle box sets correctly.

Roon treats each folder as a different disc and catalogues the entries as separate albums, but not part of the box set.

In the case of C) all tracks are in the same folder complete with artwork .

I just couldn’t imagine, for classical music, where say a collection of waltz music is performed by several composers as a one box set with different orchestras and conductors.

I hope this clears up an explanation of a very frustrating problem with Roon.

So give examples of applications that do this better and why are you not using them instead if Roon is so bad?

I don’t recall comparing it with other solutions, I did, however say it serves no purpose in my system other than that of a glorified remote… i.e. from a UI perspective its no better than any of the other solutions out there in that they too would serve no purpose other than that of a remote, albeit without the glory. Roon could be excellent, but it’s not. How devs could waste time developing features like Recent Activity whilst one still cannot sort search results or drill down browses beggars belief. As far as I’m concerned they’ve run out of ideas and/or lost the plot and are working hard to make Roon increasingly irrelevant.

As a simple example, how on earth is this a useful way to browse all performances of a track in a library, does it not occur to the devs that perhaps, just perhaps sorting by performer might actually be more useful than any of the options in that list? How do you have popularity as an option and not performer??? What was snorted before arriving at this list? 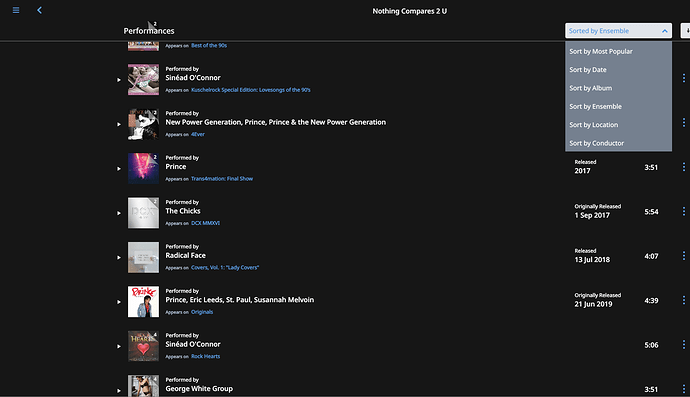 You can organise your library any way you want using metadata. That’s what focus, tags and bookmarks are for. The normal areas are how the majority of people use or want their music organised.

how on earth is this a useful way to browse all performances of a track in a library?

What you be your suggestion(s) on how it should be done? Maybe those ideas could seed some new thoughts and developments from the Roon team.

Useless is a bit strong, but I agree it’s not up to par.

In your opinion. They are not useless to me.