(post withdrawn by author, will be automatically deleted in 24 hours unless flagged)

I agree that the volume control being buried below a few clicks on a phone or iPad is a major downside of this platform. So damned basic it’s like they have an inside joke at Roon that they’re never going to fix it.

My sentiments exactly. Well said. As dev goals change all the the time from financial pressures,major stumbling blocksz staff shortages etc to post whats on the agenda or what’s in the pipeline is not viable. Also why would you give your competitors a heads up at what your planning for your product.

Because Roon is not a web page it is a generated image just like a video game.

Thank you Daniel - first time this has been mentioned here in my time as an active Roon user.

I am then wondering…is this an inherent weakness or is this something that can be resolved as a myriad of people ad finitum speak of the need for selectable text?

Further, what of the editing screen that just sits bang in the middle of the screen and makes editing more difficult than it needs to be if it could float and moved to where the user wished on their screen as most windows do?

Nothwithstanding, whilst you present your case using a few examples, it could be put to you with many other examples of companies talking about future releases, latest upcoming features to look forward to, so much so that there are just too many to mention, as we can all think of some at least. So, I think it would be prudent to meet the users somewhere along the way between no disclosure at all and full disclosure of intended upgrades/bug fixes and so on.

Obviously Roon is not a top secret organisation. Anybody is free to subscribe, use the software and come and check out the forum. There are no secrets (at least here). People can discern for themselves its strengths and weaknesses be they individual users or the so-called competition.

So, from a business perspective, I think it would be wise to discuss from time to time, (albeit loosely & without a firm timeline), some of the plans for the next release.

As it is now, many of the users only get frustrated, this thread & other like threads over a long period of time are a testament to that, and so this cloak and veils attidude seems counter productive.

Thank you Daniel - first time this has been mentioned here in my time as an active Roon user.

Thanks Geoff, alas for newer people, going back to posts from 5 years ago to find answers is nigh on impossible. Now I know as per Daniel’s reply. However, even if I was to read Brian’s post from 5 years ago, (which in fact I have regarding hardware), it still doesn’t make clear that Roon is a generated image.

As I’m not a software developer, unfortunately on face value that means little to me & certainly wouldn’t clue me in as per Daniel’s plain English reply.

Perhaps you could answer if that then is an inherent weakness or if there is some way to overcome that lack of cut and paste flexibility that many people seem to crave?

OK, so Brian’s comment meant little to you - sorry about that. However, that comment is given as a prominent link (for those who wish to know more about hardware requirements in nitty gritty detail) on the KB page devoted to spelling out hardware requirements for Roon. So it’s not a question of trawling through the forum, but simply reading the KB article.

We aren’t speaking about hardware requirements, I’m unsure what the link was meant to show me?

And as I had mentioned I have read that previously, which was posted in a thread directly speaking about Roon’s resource usage.

I control my IPad’s volume with its volume buttons, not via Roon’s volume control.

For those who think Roon is lacking features, go to the Feature Request category, and in detail explain exactly what features you want, how it should function, etc. so the guys at Roon really understand what you want. And, if any of you agree you want that too, speak up and say so. The more people wanting a feature, the more likely Roon will try to incorporate it.

LOL. In the last xy releases, how many user’s features have they implemented or fixed and how many new features that no one asked for?

They should stop inventing new (half) useless stuff for, at least, a year or two and focus on users wishes.

Yes, you’re absolutely right. I know it was a long winded way of saying it, but essentially the point I was trying to make is that (a) on the one hand the Roon team need to reassure users that they do take on board criticisms or the feature requests that are made, and then manage expectations by addressing why any often demanded feature is not going to happen, or if it will, when they can expect it, but (b) just because you want something, or the point has been raised a number of times, it doesn’t mean you should expect it to happen (or be disappointed if it doesn’t), or assume that this is what the majority of Roon users actually want.

One way of achieving this could be to share some details of their future development priorities, in whatever level of information is appropriate (if there are concerns about competitors knowing - if that’s really an issue). Another might be for Roon to survey all its users once in a while to establish what are all user’s development priorities, and see how much they align with theirs. I see some users have done surveys in the past, and there are identified ‘Feature Request’ tags/threads, some of which are highlighted to show where they are “[On Roadmap]” or “[Not on Roadmap]”. But this does not help anyone understand why something is or isn’t, and that is of course really important (especially if you’re frustrated and disappointed) if you want to manage expectations.

Interestingly, it seems that (as far as I could find out) there were approx 100,000 Roon users by the back end of last year, and reports that there were about 23,000 forum users of which only around 5,000 were “active” (no idea how that was determined). It was also mentioned that Roon only has a total of around 30 staff. If these figures are accurate it certainly gives some context to the size of the comments about as yet unaddressed feature requests or complaints at development speed and content. None of this means the views expressed are insignificant or invalid, but everyone should be reasonable and realistic in their expectations.

That said, as a still fairly young organisation, I hope Roon will learn and grow to be different from what we all usually expect from companies that become big, household brands, and never loose sight of where they came from, or what their loyal customers should reasonably expect. High quality communication is vitally important (in both directions), yet at the same time, if this forum gets bogged down in negative criticism without remaining constructive or useful, all that will happen is even less Roon users will participate is discussion (beyond technical help) and then the voice that this provides will become a smaller, less significant percentage of overall membership. So try to remain positive and say something interesting or useful, and let’s hope Roon’s team keeps listening

The more people wanting a feature, the more likely Roon will try to incorporate it.

Actually this urban myth has been debunked. Roon pays no attention to the volume of requesters, just to the quality of the idea.

Obviously Roon is not a top secret organisation.

You never know these days!

I control my IPad’s volume with its volume buttons, not via Roon’s volume control.

I’m talking about using the hard buttons to control the volume of the DAC/AMP/Device that is playing music; that in turn Roon is controlling. I’d never do any meaningful listening on a phone (or an ipad for that matter). I use my phone a control device, not playback. Everyone’s use cases are different.

It is very intuitive if you have ever used Sonos or other systems that use a phone/device as the controller for playback. My wife could care less about most things music beyond liking the song or not yet even she finds it absolutely absurd that she can’t use devices +/- VOLUME button to actually control the volume.

and reports that there were about 23,000 forum users of which only around 5,000 were “active” (no idea how that was determined)

Well there are some basic statistics available easily, but more may be available via other means. If you go to the hamburger menu top right and select About , you can see the following: 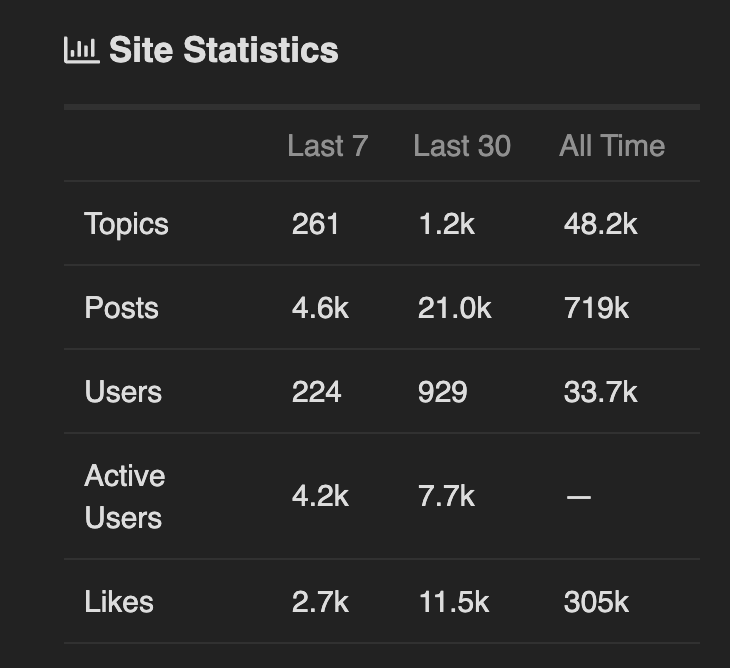 No doubt better stats are available to forum admins.

You can do something similar to see all the staff names in the client itself. Settings | About | The Team . A lot more than 30 listed.

Erm, no, that’s “Thanks to…” These are probably not Roon staff…

Erm no, The Team is more than 30: granted they may not all be full time? 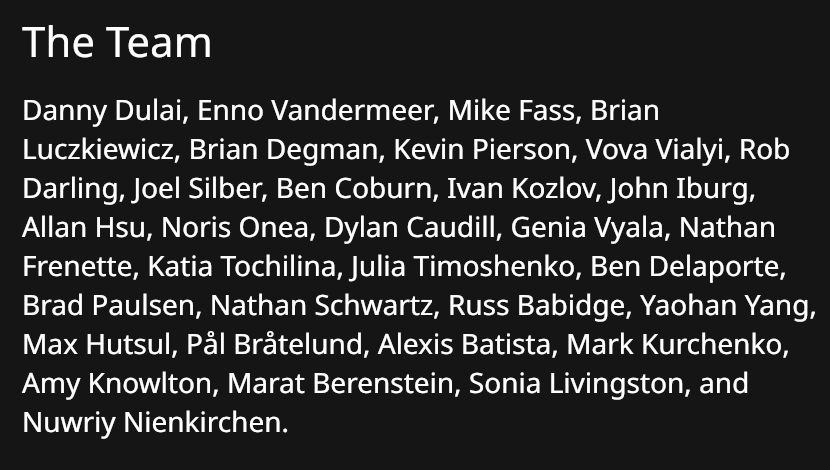 But not what I would consider “a lot more than…”