The TiVo metadata (as seen on allmusic) look pretty poor for this album. It might be worth waiting a few days to see if they revisit it. It’s unusual these days for TiVo to miss off an obvious primary artist. Also, there are no track times.

If nothing is forthcoming, we can query whether or not the release they have is indeed different to the release that’s on TIDAL (say).

Thanks, @joel. I don’t have Tidal to check, but this album came out just yesterday on Sunnyside, with distribution on Bandcamp and on HDtracks, and shows with 13 tracks on both, as does the download I bought from Bandcamp, so I doubt there are multiple releases around.

In Roon, access the ‘Identify Album’ function within ‘Edit…’
I’m seeing two options. The top selection, although not exactly robust with album info, nonetheless seems to have correct track listings. 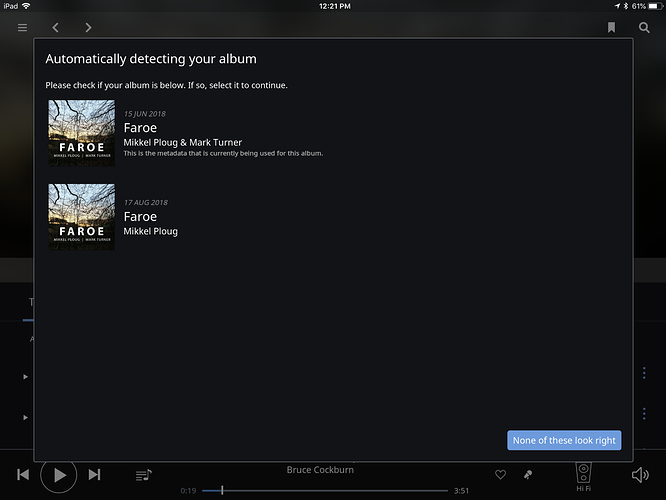 Thanks, I did that yesterday and only got the bottom one. Tried again, same. Weird that you get two versions and I get just one. Do you have Tidal (I don’t)?

Ahh… missed that on first reading of your msg. Yes, I have a Tidal subscription. That must be the difference.