So the news is that MoFi master from 4xDSD, rather than analogue masters. 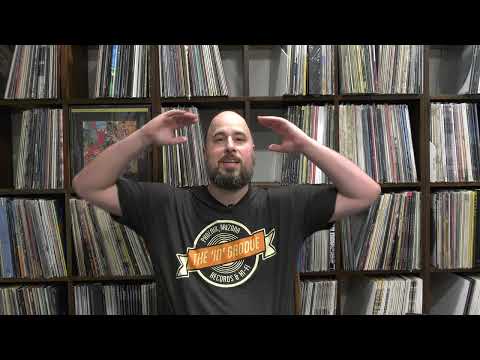 I can’t believe there has been so much ‘heat’ about this? After all, a DSD copy of a master tape is a true ‘mirror’ of the master.

I nearly posted a couple of these videos yesterday, particularly the responses from New Record day and Anadialog
But as a non vinyl user it didn’t feel right.

As I listened to what was being said, my thoughts went to that everything I hear tells me these DSD masters are supposed to be incredibly good, and as stated by MoFi team in the interview, seem far better than a digital tape copy.

Buy I also understand that people are paying crazy money for these albums because they believe them to be from analogue master tapes. Personally I find that a little bit of a stretch given that we live in a digital recording world.

Interested in a response from someone like @Jazzfan_NJ who from the threads only buys all analogue vinyl.
Are people going to stop buying MoFi?

I think there has been a long-held, but erroneous assumption that the ‘Original Master Recording’ banner means that MoFi master from all-analogue?

Yes, there has probably been a lack of transparency on MoFi’s part. But it doesn’t change the fact that many of my MoFi records, which I now know were mastered from 4xDSD files, sound jaw-droppingly great. 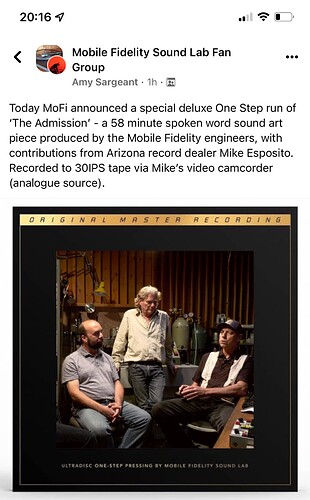 That exact comment was made by Ron from New Record Day, yet he could not keep the disappointment out of his voice. I think it is partly to do with feeling hoodwinked.

Personally, I don’t feel hoodwinked. I never really cared how MoFi mastered. I was just in awe at the results they produced, in most cases.

Some of their releases have been disappointing. But on the whole, they produce a superior product line that can, on certain occasions, take your breath away.

But on the whole, they produce a superior product line that can, on certain occasions, take your breath away.

Exactly. This why I am not even remotely bothered about the ones I own

Interested in a response from someone like @Jazzfan_NJ who from the threads only buys all analogue vinyl.

And here is my response:

I don’t buy all analog vinyl, I just happen to own lots, somewhere around 3,000 LPs, of all analog vinyl. Back in the 1980s and 1990s, during height of “let’s get rid of these LPs and replace them with CDs” craze I bought a Linn LP12 instead and kept all my vinyl. Since then if I buy a record, it’s used and, hopefully, all analog.

Unlike others who don’t like digital, I have no problem with digital and listen to digital about 90% of the time. What I do have a problem with is playing digitally processed “analog” rather than just playing the digital copy instead. My feeling is that once one introduces digital into the playback chain then it’s now digital and I don’t see the point of reintroducing all the analog playback issues, like skips, pops, clicks, wow, rumble, tracking errors, hiss, etc., back into the playback.

I’m sure that there are many people who enjoy all the rituals of vinyl playback but I spent years with only vinyl, cassettes (remember them?) and FM as the sources, so I’ve had my fill of all the rituals of vinyl playback. I do miss the large format of an LP cover but on the other hand I really like the experience of using Roon, especially when there is robust metadata and lots of hyperlink to get lost in.

So I guess my feeling on the MoFi controversy are on the side of the individuals who feel that they have been hoodwinked by Mobile Fidelity but then again MoFi never completely claimed to be providing “all analog” LPs, just “Original Master Recordings”. Kind of disingenuous but hey, that’s capitalism for you. Caveat emptor

Back in the 1980s and 1990s, during height of “let’s get rid of these LPs and replace them with CDs” craze I bought a Linn LP12 instead and kept all my vinyl.

A wise choice since those early transfers to CD were often awful.

Luckily, I kept my vinyl collection too. There was a great temptation to get rid of vinyl in the mid-80’s and replace the whole lot with CD at the time.

Now, with LP12 with Cirkus/Radikal/Keel/Ekos/Adikt/Uphork/Klimax Kontrol/C4100x2/Aktiv M140 + M126 I’m so glad I hung onto my vinyl collection!

A lot of my punk records weren’t put on CD initially. Can’t say much about the fidelity though….

Personally, My first thought was I want to buy those dsd files as downloads.

Nice idea there, but I guess you are more likely to be able to afford a trunkful of mofi vinyl than a single one of those 4x DSD masters.
I think maybe an Italian job style raid on the mofi offices now that they are otherwise busy

You can buy them. As SACD’s

As owner of approx 60 mofi records I really couldn’t care less where the provenance stands.
There is just one acid test…what they sound like to my ears in my system.
Now vast majority of my mofi are much older copies, very early numbers like 001,002,003 etc. so not even in this “controversy”.

But not all mofi even then are great.
One example being I Robot by Alan Parsons, I much prefer my original “normal” record version.

Now I did preorder Thriller so will be interesting to compare that when it arrives to my original Thriller copy.

I’ve got a Mini Cooper y’all can use!

I think their masters are Quad DSD. Bur they would never make them available for download. They wanna sell physical product

I can understand One Step buyers being irked about this, for sure. They slap down a lot of money for those LPs thinking they were getting something they weren’t necessarily getting.

As an SACD buyer, this news doesn’t affect my chosen format. The only LP I own from MFSL is Natalie Merchant’s Tigerlily…and it hasn’t arrived yet for me to listen to it.

to be honest, it is the only MFSL title I am interested in on vinyl. I have the MFSL CD, but I just know it can sound better! Everything else there is a CD or SACD for it that I am content owning. I will not stop purchasing MFSL SACDs due to this controversy. Audiophile CDs and SACDs are far less prolific than audiophile LPs in this day and age. If I still bought LPs, I might take my money elsewhere.