Anyone have experience with these ‘24k gold’ CDs? I just have one so far, R.E.M. Murmur but it sounds so good. I have heard others that I’ve borrowed from friends.

I don’t know what they did but I would say it even sounds better than any modern-day remaster. 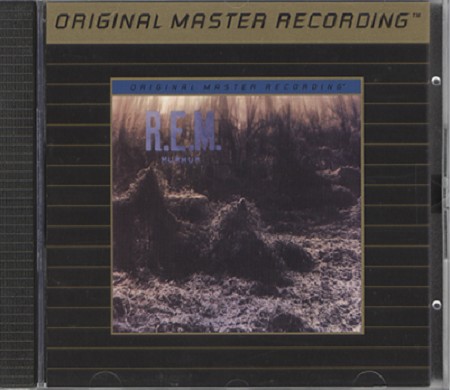 Yeah. From what I understand, a lot of mastering engineers in the 80’s and even 90’s were too used to the old days of mastering for vinyl where they could boost the gain a bit too much, which worked with vinyl, but not CDs, leading to poor sounding over-modulated CDs a lot of the time. I’m sure that’s part of it, but Mobile Fidelity I think did other stuff too to optimize, probably EQing, and maybe even running it through some sort of processors.

I’ve got Supertramp’s “Crime of the Century” in that format; and it sounds better than ANY other version I’ve come across since; remastered, highres or whatever.

They had some kind of magic they did with these discs for sure. Every one of them I’ve heard sound amazing.

I think it’s more likely the other way round. Mastering for vinyl is a balancing act to cut the record at a high enough level to minimise the audibility of the noise floor, but not so high as to cause distortion, and there are physical limits to how heavily you can modulate a record groove. Mastering for cd is different, and you can put in much more energy at much higher levels by applying dynamics processing to make it sound ‘better’… or maybe just ‘louder’ than everyone else’s mix…

My less than golden ears suspect they master through tube gear or apply something to make it sound like it was.

Drawn a bit of a blank about the cd mastering. Vinyl is half speed mastered. Anyone know if the ‘Murmur’ masters are analogue tape?

For over twenty years, Mobile Fidelity Sound Lab has continually searched for the ultimate audio experience. During this search MFSL engineers and associates created The GAIN™ System, a proprietary mastering technology which brought warmth and ambience to the compact disc format. A few years ago - with higher resolution formats on the horizon - the vision of GAIN 2™ began. As it stands today, GAIN 2™ is one of the greatest technical advancements in analogue and digital technology in the last ten years. It consists of a series of critical modifications and new components to Mobile Fidelity’s proprietary mastering chain.

We feel that GAIN 2™ has come extremely close to meeting this goal. The key accomplishments of GAIN 2™ System are 1) the ability to extract all the musical information as possible through the Ultra High bandwidth analogue tape playback system with proprietary custom tape playback heads, reproducer electronics and 2) transparently capturing and storing that information with the Direct Stream Digital recording system.

Yes. Saw that. Interesting… but doesn’t actually tell you much…

On a serious note, I assume they don’t master to DSD for the CDs. But DSD does have that euphonious sweet character.

I assume they don’t master to DSD for the CDs

Why? It seems clear to me they create a digital DSD master.

Looks like they remastered from tape with their proprietary A2D and filters to DSD, for SACD, and then produced both SACD Hybrid discs (both DSD and Red Book PCM) from that digital master, and the “gold” CDs (only Red Book, it seems). I don’t know anything about their work, but I’ve enjoyed some tape>digital transfers from https://www.highdeftapetransfers.com/

Anything specific about the ‘Murmur’ disc? Anything in the case notes?

Why? It seems clear to me they create a digital DSD master.

I guess so. I’m just not sure why a super-compulsive audiophile would want something converted to DSD then back to PCM for a redbook CD. I guess it would have to be, in order to “be the same master” and to have a similar sound.

Don’t get me wrong - I like the sound of DSD and for a while I was converting everything to DSD to play through my Project S2 Digital (and just to make my core work for it!) but then I wouldn’t want to again convert it back to PCM somehow in the playback chain.

Not that it sounds “bad” (indeed I listen to ripped DSD converted or reconverted back to PCM all the time). But rather I would bet that it would “measure bad” and sound euphonious, which is fine with me, but sort of contrary to people putting in special power substations in their back yard to convert the sun into a linear power supply to regenerate their ethernet signal so as to purify the audio signal before it is blessed by an Eastern Orthodox priest while being cached at the RAAT endpoint.

So, long way of saying, sounds good, not theoretically pure.