It’s probably too early to state this as a fact, but it looks like Monterey (12.3) may well have fixed (or at least ameliorated) the memory leak with Roon Server. I’ve been watching memory usage for the last 4 hours, and it goes up … and then it goes down again. I’ve only been playing to one endpoint, but it’s looking good so far.

Thanks for posting… I had stopped using Roon on my Mac for this reason, I’ll give it a shot tomorrow though.

Four hours later, and Roon Server is still using pretty much the same range of RAM during normal listening. Tasks such as scrolling through thousands of albums cause an increase, but this is much greater with the Roon client than it is with the server, i.e. Roon client RAM usage went up from around 600 MB to around 4 GB, but server memory only increased from 3.82 GB to 4.08 GB. I’m really hoping this is fixed, because it was the one thing annoying about my M1 Mac mini.

I had stopped using Roon on my Mac for this reason, I’ll give it a shot tomorrow though.

Let me know how you get on. FWIW, when I went to bed last night Roon Server was using a minimum value of 4.42 GB. I played a couple of albums to a Ropieee endpoint and, on checking RAM usage this morning, it’s now at 4.32 GB - so looking go so far.

Another memory leak that was bothering me was WindowServer, but this is now also stable at around 1GB (previously it would start to creep up to around 2.5GB over a few days). Fingers crossed, but it finally looks like Apple may have ironed out the problems it introduced with Monterey.

How many tracks in your database?

After my enthusiastic announcement yesterday I need to backtrack a bit. On the whole, it seems that RAM usage has improved, and less things are leaking, but Roon Server has now crept up to 5.5GB in the last 20 hours or so. I’ll keep you posted.

Both use upwards of 8gb memory with a 300k track database. It’s late here (2am) but I’ll try to link some previous threads on this from a while back.

Both use upwards of 8gb memory with a 300k track database.

I was hoping that 12.3 would stabilise memory usage as, in my experience, it just keeps creeping up. 12.3 does seem better - memory usage seems stable for now - but I guess a large library necessitates a large amount of RAM.

Indeed it does…the same library in windows oddly is also up around 5+ GB but I’ll need to dive Mapuche deeper in the setups to graph it all out.

I have just added in the 2 shares hosted on a Win10 PC of the other local music. so its a bit busy scanning everything but analysis is currently off. as you can see 8GB is nowhere near ideal for larger libraries 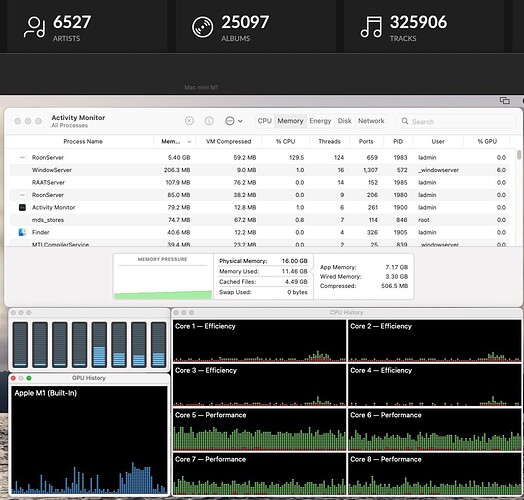 Agreed. And 16 GB, if you plan on doing anything else with the mini other than running Roon, is probably essential. 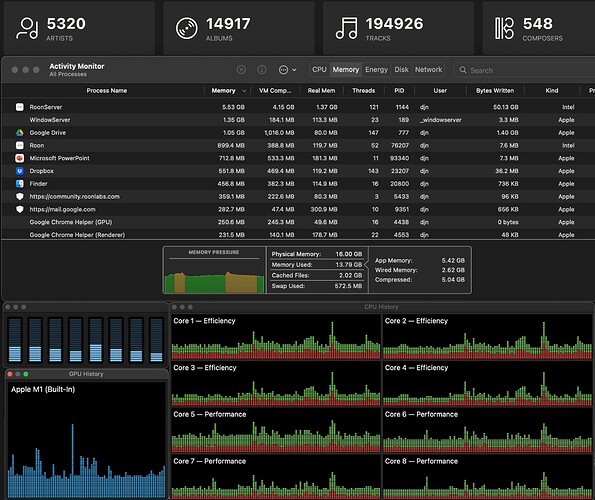 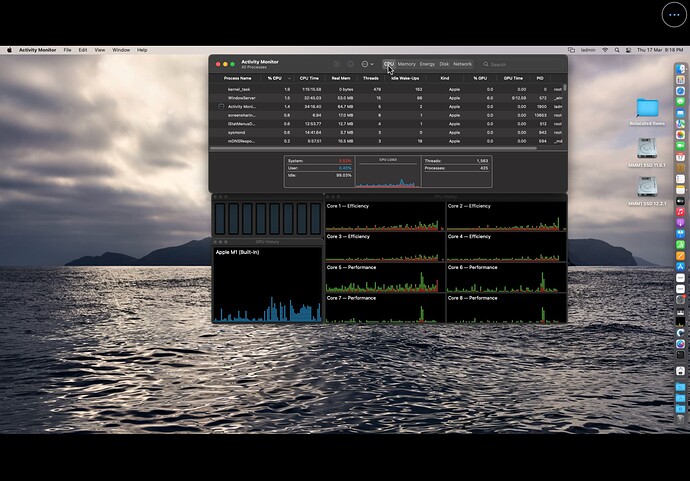 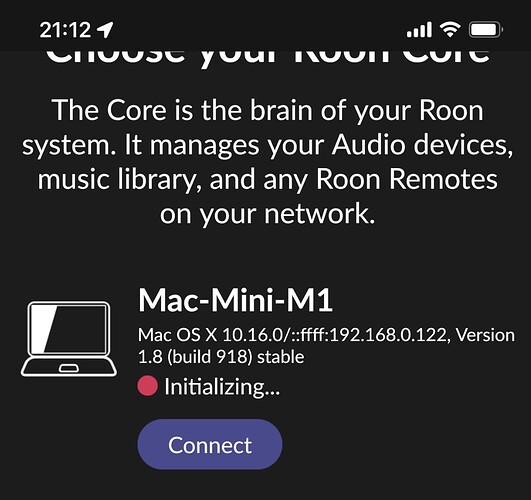 Core seems to be stable for me, but I have had Roon client crash a few times. If it continues I’ll put in a support ticket over the weekend.

Ive not seen any Remote issues with my MBP 2018 32GB MacOS 12.3 install…it runs many other things too but not normally a core.

Interestingly I just thought I would update my old 11.6.4 MacOS to 11.6.5 and low and behold it gave this screen when I tried to run the RoonServer app 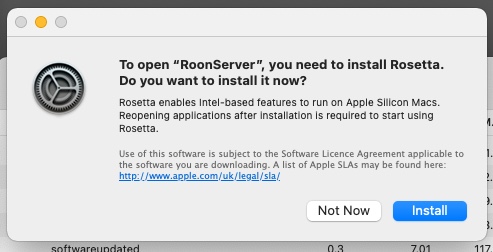 anyway now running on the 11.6.5 install and just added the 2 network shares to this install again

12.3 did not help for me, quite the opposite. The first time since long that Roon crashed due to no memory left.
MacMini M1 8GB, Roon only with a small library.

Know I go slowly in the territory of unusable. Each time I want to use Roon, I have to restart Roon first as to much memory is already taken up by Roon > 9-10 GB.

I am using a 16GB/512GB M1 Mac mini with macOS 12.3 installed. But, since I am running it headless, I am using the Roon Server (Build 918) which has no user interface. I use my iMac or iPad via the Roon client app to manage Roon settings, etc.

Anyway, the M1 Mini has been running for several days and the Room Server is only using 1.2GB of RAM and it seems stable. You might want to give it a go to see how it works for you.

details dont say that much unless you define the library size (number of tracks) Im guessing a rather small library - mine is 300K+ and is sitting at 6.7GB currently memory in use. Folder size for /Users/xxxxx/Library/RoonServer/Database is currently about 12.23GB

Thanks, I am running the M1 also headless, maybe I will try it.
My database is fairly small with 15k tracks.
If the server version is stable it is probably a small bug in the desktop version?