Since Roon supports display on the Google Chromecast I think it is a nice feature to display more info than in the current version does. Are there plans of enhancing the display features? I’m thinking of more information about the currently playing artist and/or song and a nice screensaver. As an example I’ve included a picture of my audio setup where I use the TV as a Roon Screensaver. This is done using Chromecast Ambient backdrop picture viewer. From Google image search I’ve downloaded 450+ pictures in 1920*1080 resolution of artists in my library, saved them as [artist-name].jpg and then used Irfanview to add the Roon logo and the artistname in the JPG. When posting this picture in a dutch facebook HiFi group I got some questions where this Roon feature was hidden

People liked it a lot. maybe a suggestion for future enhancements of Roon? 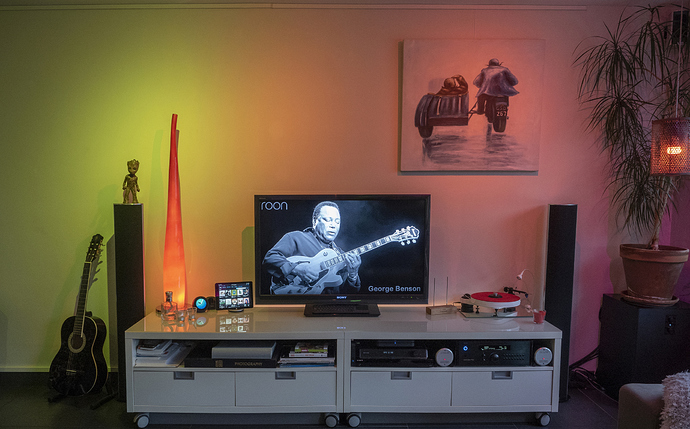 I think I’m in the minority but I would prefer large album art, artist/album/track and track progress only.

Over half of my listening is to orchestral music and artist images are often incorrect or low resolution to the point of being a distraction.

I love the Google Chromecast feature but I do agree that more flexibility in what appears on that screen would be welcome.

User configurability is key. If this forum confidently illustrates one thing, that thing is that it is impossible to please everyone with a single option.