Mozart’s, Flute Concerto No. 2, in D major K. 314 was actually originally written in a different key (C major) for oboe. Under the composition description roon has found a long discussion on this. I have an oboe version and 3 flute versions. They are similar but not straight transcriptions. These days it is more famous on flute but this is annoying. Roon has not identified the album but it has nevertheless identified the composition incorrectly as a Flute Concerto 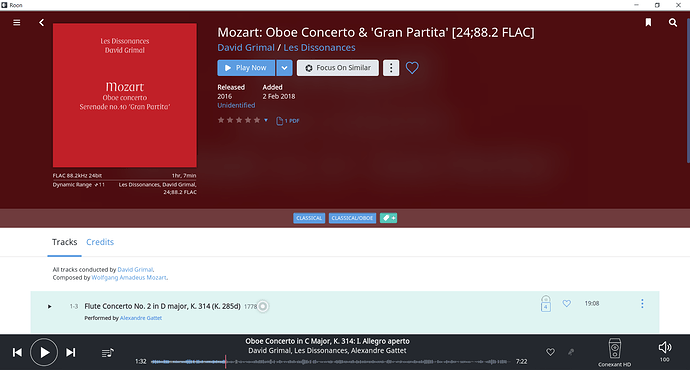 As it happens this raises a more general point about classical handling in roon. I quite like being able to group such different “performances” of works like this. It is a great way to explore your library. But I want to keep the the original titles so I know the differences. Sometimes I just edit the composition to say something like “Concerto for flute or oboe”, but that is really just a kludgy workaround. In this case the concertos are in different keys as well so an edit like “Concerto for flute in D major, or oboe in C major” just looks a mess but it is better than nothing.

I find this a lot. It is very common for classical performances to differ by scoring revision, instrumentation, suits vs, entire works, orchestrated versus piano etc. etc., not just varying by conductor/ensemble and date (for the superstars with multiple recordings).