Which is pretty strange since Roon sends the sound signal bit perfect. But I guess the roon and bluesound guys will figure it out

They have. Bluesound needs to implement an update to the RoonReady SDK. It has been available for a few months now, but unfortunately it also involves changes in the MQA is currently embedded in the Bluesound architecture. It’s a sizeable job, but it looks like things are moving now.

Thanks for the heads up

@rbm What are the signs it is moving?

Yes, I don’t see any signs. Same thing with implementing DSD. Supposedly Bluesound has been working on this for months, but nothing has been announced.

On the public side, @mike has commented on the Bluesound situation here:

Bluesound have committed themselves to implementing the new SDK about six months ago, but also told it is a lot of work that takes time to make changes to their own architecture. The SDK updates involves both syncing improvements and MQA integration. DSD, AFAIK, was never never firmly promised, other than it being on the list of things to investigate – as goes for a host of other feature requests.

Mind – I’m not trying to to sweet-talk over this. I think things are moving too slow at BS and have sold off a Node 2 that I was otherwise happy with over this (the Pulse 2 in my bedroom isn’t going anywhere soon though).

But integrating ecosystems is hard and sometimes has unforeseen consequences. The whole MQA thing brought with it new requirements that only became clear after Bluesound had stepped aboard the RoonReady boat. I commend them for committing to the work, but yes – for a BS owner, it’s a long wait.

Bottom line here folks is that you will be able to enjoy unfolded mqa on bluesound devices. This is thanks to Roon, not bluesound. Other brands have worked hard such that their devices do both mqa unfolds, bluesound hasn’t (in roon ). Its important to understand that the second unfold is device specific, to optimize sound. Bluesound owners won’t have that and frankly I don’t see bluesound (given their track record on this issue) spending dev money to achieve this, nor do I see an outcry from us owners over this. Doesn’t seem anybody is listening in any case.
Be happy! Mqa in roon over bluesound endpoints is on the horizon. Thank you Roon!

Hi Mark, has it been confirmed that Roon will do the complete unfold?

It’s all here (somewhere). My understanding bis Roon and mqa have come to terms. Roon will do the first unfold, same as tidal does in a PC environment. The second unfold is a dac specific tweak…

Any update on this topic? I have a NAD M12 with a Bluesound card that I’ve been patiently waiting for the ability to do a full MQA unfold from Roon/Tidal.

Unfortunately there seems to have been radio silence from Bluesound over the past month on both this and other issues. Let’s just hope Roon’s unfolding will work even if Bluesound are behind on their implementation (which seems likely).

Hi John,
Bluesound, at least on the Node 2, has a full working MQA stack for Tidal and local files/NAS. It’s Roon, which can’t handle it. I would not expect any change here as the target market is very very small.
bye

Marcus…to quote Luke Skywalker: “Amazing. Every word of what you just said was wrong” 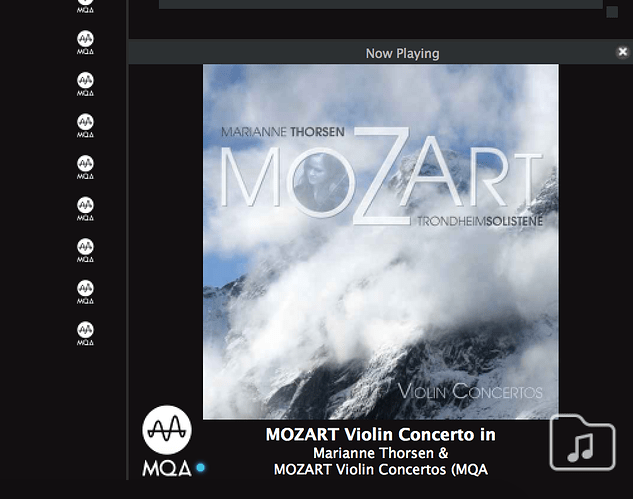 Great quote, but your own assessment is incorrect. In fact, I still can’t understand why Bluesound is getting so much blowback for this.

I’ve had unfettered access to MQA (for better or worse) via my Bluesound Vault for over a year.

My impression is that Roon required Bluesound to alter how they are handling MQA because of RAAT, not the other way around.

Has Bluesound been incredibly slow to respond to this change? Absolutely, but, if MQA works fine via Bluesound and without Roon, that sounds like a Roon problem to me, not a Bluesound problem, correct?

Happy to be educated in order to understand otherwise.

A bit of nuance is needed here. While the first part of your statement (Bluesound supporting full hardware MQA decoding) is right, the second (Roon can’t handle it) is not: Roon is perfectly capable of shipping out MQA files to MQA enabled endpoints and DACs.

The Bluesound situation however is a bit more complicated: Roon has offered an updated RoonReady SDK (with some changes in the way MQA is handled) since late summer last year, but Bluesound have found some architectural challenges implementing this in their hardware/ecosystem. While they have committed to doing the job, so far they have not released the updated firmware.

So while in the end all will be resolved, the current situation is a bit unfortunate and taking longer than anyone would like.

Thank you for responding, Rene. We appreciate it.

Just to be clear, again, if Bluesound was perfectly capable of handling MQA before Roon got involved, Roon was the company which required an alteration in how MQA is handled. Why require the change at all?

Hi Joe,
as far as I understood, Bluesound uses an old / outdated Roon SDK. The SDK in use by Bluesound does not support the new/proper/… MQA handling.
If you have a look at the market size for HQ audio and MQA, I think this change is not on top of the feature list for Bluesound - that’s all.
bye
Markus

Markus…There is no “new/proper” handling of MQA. MQA is handled fine by Bluesound already. The “new/proper” might be from Roon’s perspective, but I’m not sure I’d call it any more or less “proper” than any other implementation. I’d merely refer to it as the way Roon is electing to implement MQA via RAAT. If that means “proper” to everyone here, so be it, but, let’s be clear and accurate in understanding that this can all be done entirely without Roon at present; no alterations required.

All of this said, MQA has done very little to reverse Tidal’s fortunes or subscriber base, so, this may all be essentially for naught.

MQA wouldn’t be on my personal top 10 for Roon developments I’d care about, I just hate using two apps at present when I do want to dip into MQA, that’s all.

Hi Joe,
exactly what I tried to mention earlier today (in my first port)

Bluesound does not require Roon for MQA processing, but actually the combination of Roon and Bluesound is not working for MQA material. With other devices it’s working, at least the other combinations I have in use. The technical reason behind seems to be a change in the RAAT protocol / Roon SDK.

And like you pointed out, I do not believe MQA / Roon integration is a big business case for Bluesound, at least for now.

For some this seems to be an big issue - may they complain and wait - I prefer listening to the music, unfortunately without Roon as control/frontend for this type of source.

But who cares at the end of the day

PS: I’m on a lifetime membership - just to clarify