Roon has read 2 CDs from the same multi-disc as 2 separate CDs (with the same cover. How can I combine these 2 CDs into the same Multi-Disc album in Roon?

Thanks for the Help!

What do the folders and tags look like for these albums?
E.g. Do they have the same title? Are they tagged CD1, 2? Are they in the same folder?

The albums appear as 2 separate CDs, with the same title, cover art, and tags (empty/blank tag).

what @ncpl means, I think, is how the directory structure on your hard disk looks like. 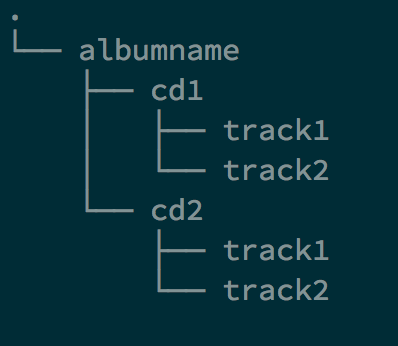 Thanks for the clarification. I have no idea where to get that directory structure and where to find it. Excuse my ignorance I am new to Roon.

For your guidance, I am running Roon on a Mac.

you can find this directory structure where you have your audio files stored.
Where did you tell Roon to look for your music files?

I am still finding my way. Have a life-time membership. Learning as I go. This may or may not be responsive to your needs. Recently I converted a Blu-ray disc to 192/24 AIFF using MAKEMKV and DVDAE. There were 40 tracks in total from three different sessions of a concert. I organized it as it they were 3 discs, but, in fact there was only one blu-ray disc with all three sessions (audio and video). I also added them to iTunes in the same configuration, e.g., as 3 discs. And I created a folder as CSNY 1974

What I discovered when I located this album in roon was that roon has it listed as one album, CSNY 1974, with 3 discs, and it looks like this: Disc1/Disc2/Disc3 and will play the tracks sequentially from track 1 to track 40. I can click on any of the three discs and roon will play those tracks from the disc # I click on.

Wonder if this helps. Sorry for the wordy reply.

Sorry for being so late I have been out of station for a few days.

Anyway my music files for that album are located in my iTunes Media Folder:

The 2 files in question are

I hope this provides some further clues!

When I had this issue, I used a tagging program to edit the DiscNumber Tag field, so first album was Disc 1 and second Album was Disc 2. Then Roon combined them into one album with two discs.

On Mac you can use kid3 http://kid3.sourceforge.net for your tags

I try one more time in the hope that my second response might be more useful.

I store all my albums on a 12TB R6 Raid 5 Promise Pegasus Thunderbolt Drive. All my albums are stored in a directory within a directory. Inside the music library directory are albums by artist or composer and the title of the album. I choose NOT to use underscore, and punctuation like colon or paranthesis. If I choose to combine a multiple disc box set whether there are individual disks or multiple sessions on one disc, I tag each track as 1-01 XXXX and for the second disc 2-01 XXXX and if there are more than 2 disc, then 3-01 XXXXetc. I also add the titles to iTunes by choice. In the latest version of iTunes one can accomplish the same outcome by identifying the entire number of tracks for all the discs, e.g., 40, and in the set box the number of the disc, e.g. 1 and the total number of discs 3. I accomplish this by clicking on Get Information for each track title and tag them as name of track, artisit, title of album, album artist, track 1 of 11, set 1 of 3, even sorting by is consistent with all three tracks.

In roon those three albums will then appear under one album with disc 1/disc 2/disc 3 showing the individual tracks in each disc # and all the tracks of as many discs.

I hope this is responsive to what you are asking. If not, apologies.

Another tagging software, a member at Computeraudiophile.com recommended is Yate at http://2manyrobots.com/yate/ had very good things to say about this system for tagging.

I need help here as well. I have a two-cd set (Ryan Adams - Live at Carnegie Hall). On my NAS this is stored as:

What I found is that if I changed the cd names to CD1 & CD2 they combined into one album and above the track listing it says >Disc 1 | Disc 2. This will work fine. Apparently it didn’t like they way I had named the two cd’s even though they are in the same album folder.

I have a rather large library. Multi-disk albums all carry the same name (no designation in the album name of the disk number). Some will have different art for different disks. The files are stored under album artist name, then album name, then disk number (as sub-directories). This was done long ago (before Roon). Don’t think Roon likes this setup - I get separate “albums” for most of these disks.

Hey @Ronald_Lyster – give this a read.

Generally speaking, Roon needs to know that the various discs are all part of the same album and they should be grouped properly. The link above describes a couple of ways to make sure this happens.

Just note that having each disc in their own folder, with tags/folder names all indicating that they’re “Disc 1” are generally going to be kept separate, since ignoring that clue can wreak havoc.

Interesting. My collection is like this:
My music files are organized in sub-folders under a Prime Folder as follows:

Prime folder
—Music
-----Artist Name
-------Album Name
---------Disk Number
—_VA
-----Album Name
-------Disk Number
—Playlists
—RoonServer
…
The track numbers are in the tags, not in the track name. The CD number does not have “CD” before it. Each album is in a separate sub-directory under its artist. Does any of that make the difference? It’s probably going to be too big a project to rename everything at this point anyway, so perhaps it doesn’t matter and I’ll just need to live with it.