According to the 1.7 release notes:
> Roon now supports multi-level compositions, which are particularly useful for opera where many compositions include Acts in addition to parts.

> When this data is available from our metadata providers, it will now be properly displayed on the Album Details page. It’s also possible to populate this data by using the SECTION tag in conjunction with WORK and PART tags

Being able to group tracks in sections using SECTION tag is a nice addition. I have tested that and it works well. The issue I have is with Roon trying on its own to infer groupings based on data available from our metadata providers. Inappropriate or out-of-context data from providers can lead to severe errors on album pages, particularly with operas.

With operas, it is clear that the Roon software infers the groupings from the part/movement list that Roon fetches from AllMusic (I think) at the composition level. Note carefully that this list is not attached to a particular performance of a given opera as recorded on a given album, and there lies the problem. In the world of opera, many versions can exist for a given work, each with it own layout of acts and scenes. When performing a work, conductors often exercice their artistic freedom/judgment to somewhat arrange the libretto (omitting scenes, rewriting some passages, etc). At the recording level, parts of a scene can be recorded one part per track on one recording, whereas on a different recording, those parts can be merged in one track, leading to changes between albums in the way tracks are titled. What this all means is that trying to infer Act/Scene groupings for a given opera from a generic list inappropriate to this opera version/performance/recording can lead to gross errors in resulting the album page.

An easy example is the Don Carlo opera by Verdi. At least 5 versions exist for this opera. The act/scene groupings proposed by AllMusic at the composition level are as follows:

The performance on which this list is based is not indicated (and this is a major problem), altough it is clear that it reflects the 5 act italian version which Verdi produced based on his grand 5 act french one.

I have in my local library many performances of the Verdi Don Carlo. One is the Karajan 1958 recording at the Salzburg festival, reissued on DG inside the Karajan Opera boxset.

The tracklist for this recording as seen in the boxset booklet is as follows. Note carefully that Karajan uses the so-called Milan version of the opera, which contains 4 acts. 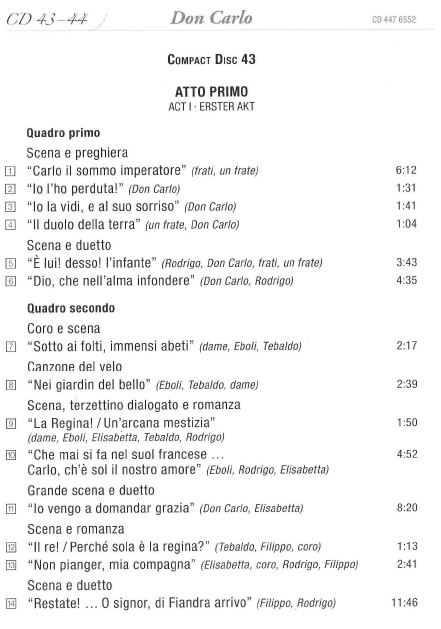 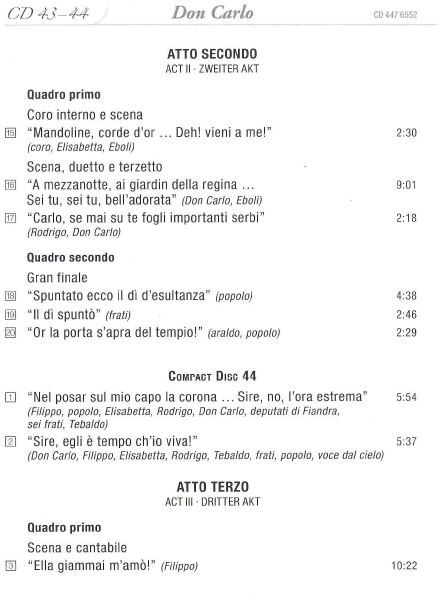 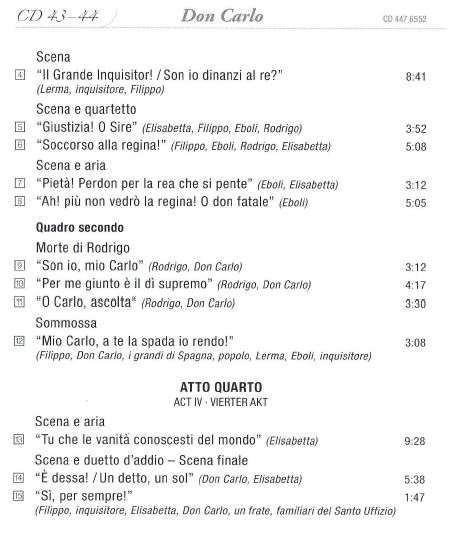 The tracks of this album have been carefully tagged with WORK/PART tags to exactly reflect the booklet tracklist . Here is the resulting album page displayed by Roon v1.7. 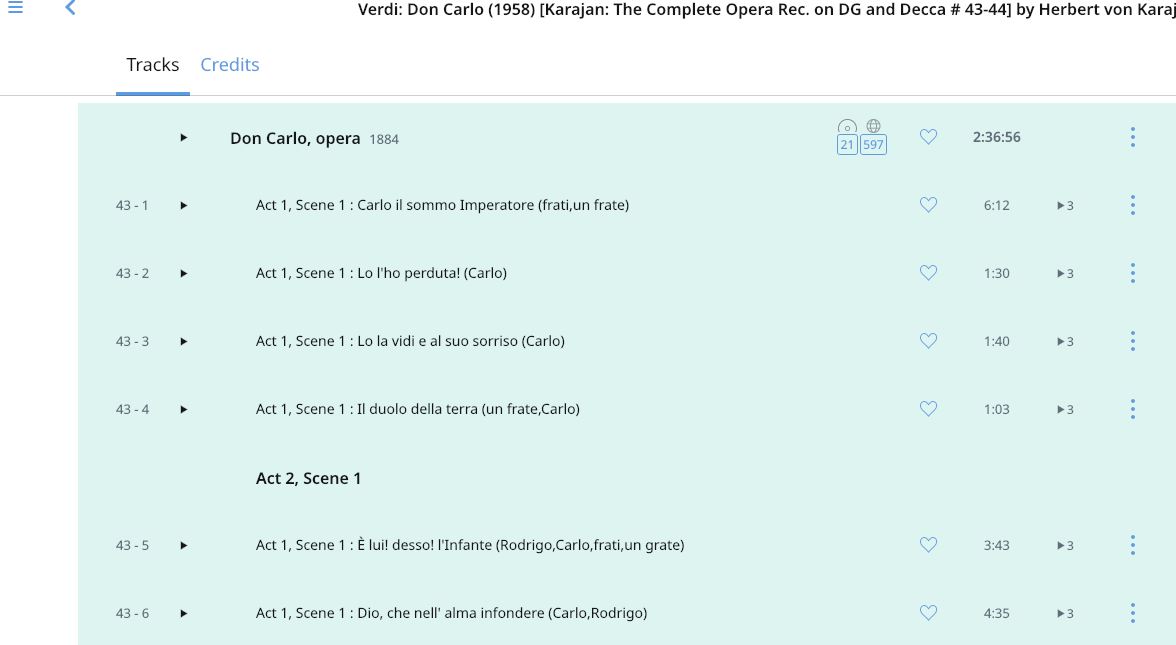 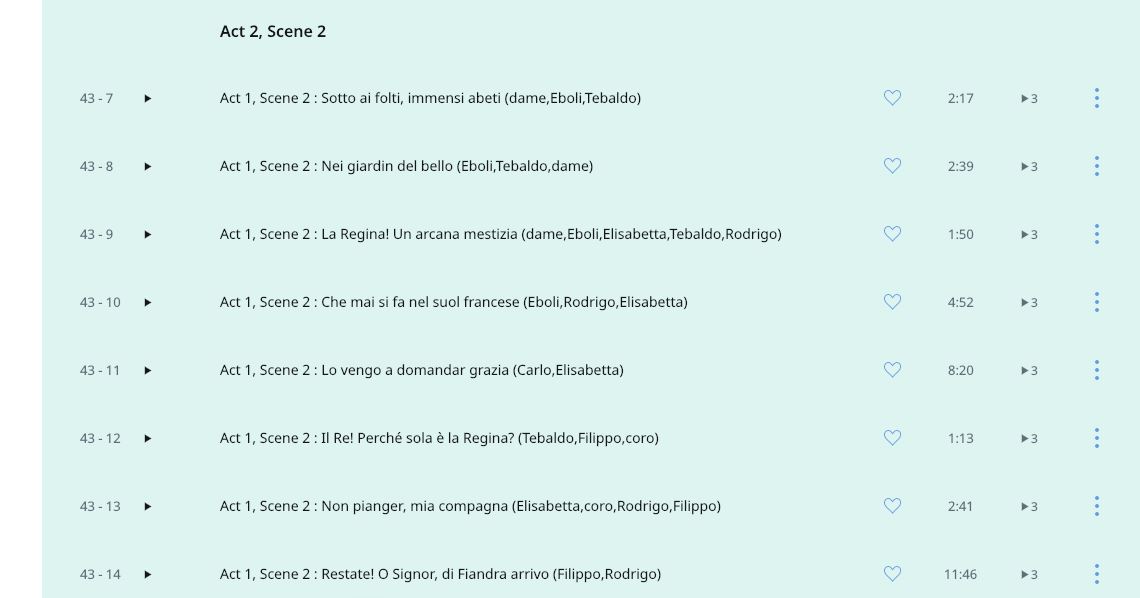 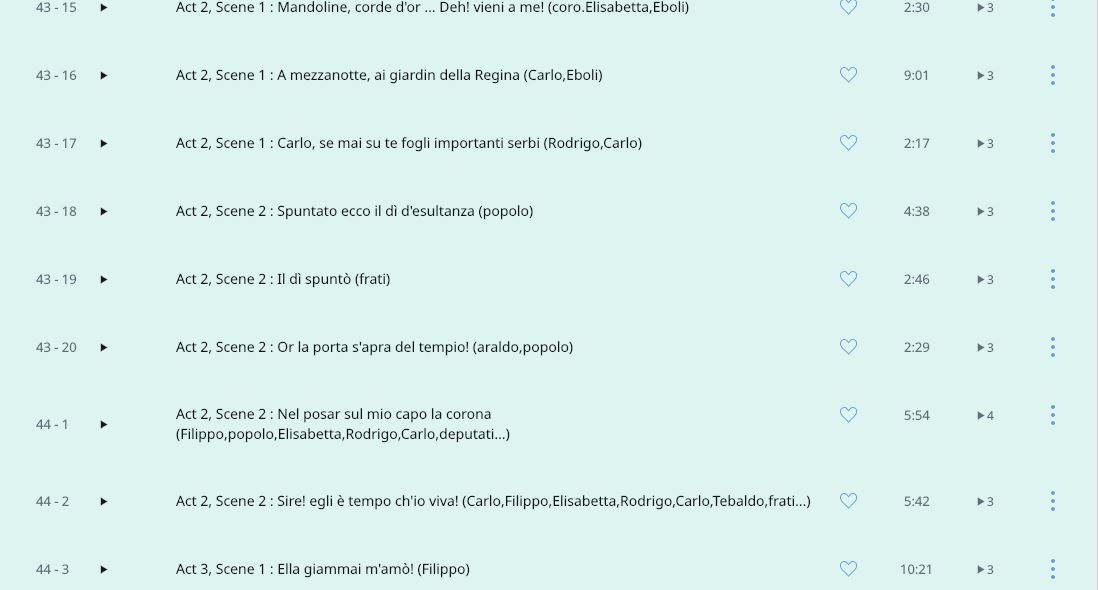 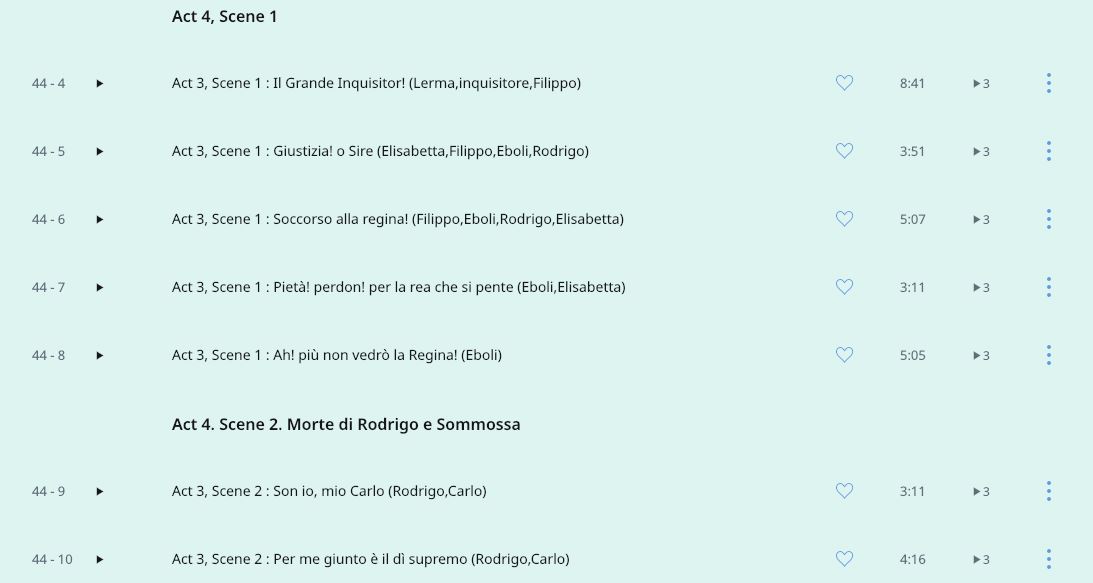 It is sad to see that Roon totally ignores the act/scene data clearyly spelled out in the track titles, and where it would be very easy to get. Rather, to infer its Act/Scene groupings, Roon goes straight to the 5-act list that AllMusic supplies at the composition level and tries to match the titles between the two. This just cannot work and is plain wrong.

The resulting album page is totally ruined by this effort by Roon to look smart and infer the track groupings on its own. That is not my definition of what artificial intelligence is all about. Alas, I see no way in the new 1.7 version to deactivate this Roon behavior. I could give you dozens of examples of this. My only recourse now to bring sanity to the album pages is to spend yet more time and effort to retag my files using the SECTION tag. This is time and effort I would prefer to spend elsewhere.

I have no idea of the percentage of cases where Roon grouping inferences may be correct. But the sole fact that Roon is wrong in a lot of cases similar to the one I presented above is, in my humble opinion, enough to raise a red flag. It is ironic that this new “feature” is touted in the 1.7 release notes as being particularly useful for opera where many compositions include Acts in addition to parts, when in reality it’s the exact opposite.Could I ask the Roon team to issue a new release with this “feature” totally withdrawn?

Instead of removing / switching off the feature (would be a shame, I think) Roon should get trained to handle this better. Like when it finds “Act 1” in the movement description, it shall not group it into an “Act 2” section. This should be achievable and would help much more.

BTW: I wonder if you’re using a tagging application which supports batch operation in some way? Because then it might be possible to “almost” automatically extract the “Act # (+ Scene #)” part from the movement tag and to copy it into a new Section tag for all your tagged operas. That way, you probably could put the section tag to a meaningful use and would not have to spend too much time.

Thanks for your comment @anon47919701. I understand your point, but it somewhat amounts to saying: “Give time to Roon to handle this better (“they are a small team you know, etc, etc…”), and in the meantime try to fix the grouping errors yourself using a batched tagging operation”. This is where I disagree. Before rolling out this “feature”, Roon should have done a more thorough validation of its algorithms, notably by asking it opera-fans base (and there are a lot!) to test the results and see if Roon needs to get trained a bit more time.

The Roon team should learn to better collaborate with it user base and humbly make better use of their experience (and again, I know it is huge!). I feel being used like some sort of guinea pig here, and forced to invest more time and effort in fixing Roon grouping errors. I did not ask for that.

I just hope the Roon team will admit its errors and withdraw this “feature” until as you say its algorithms are better trained. If its not ready, back to the drawing board.

We looked into this, and it appears that this issue is stemming from bad metadata from one of our providers. We are going to reach out to them about this.

@dylan I do not understand why you say this issue is caused by bad metadata from one of your providers. Please look carefully at all those screenshots I posted, particularly at those listing the album contents. To reassess what I wrote before, I reloaded the album after removing the WORK/PART tags and making sure that the “Prefer Roon” option was selected for “Album title” and “Track titles” in the “Metadata Preference” pane, all this to make sure that the album page contents come from Roon. Here is the result: 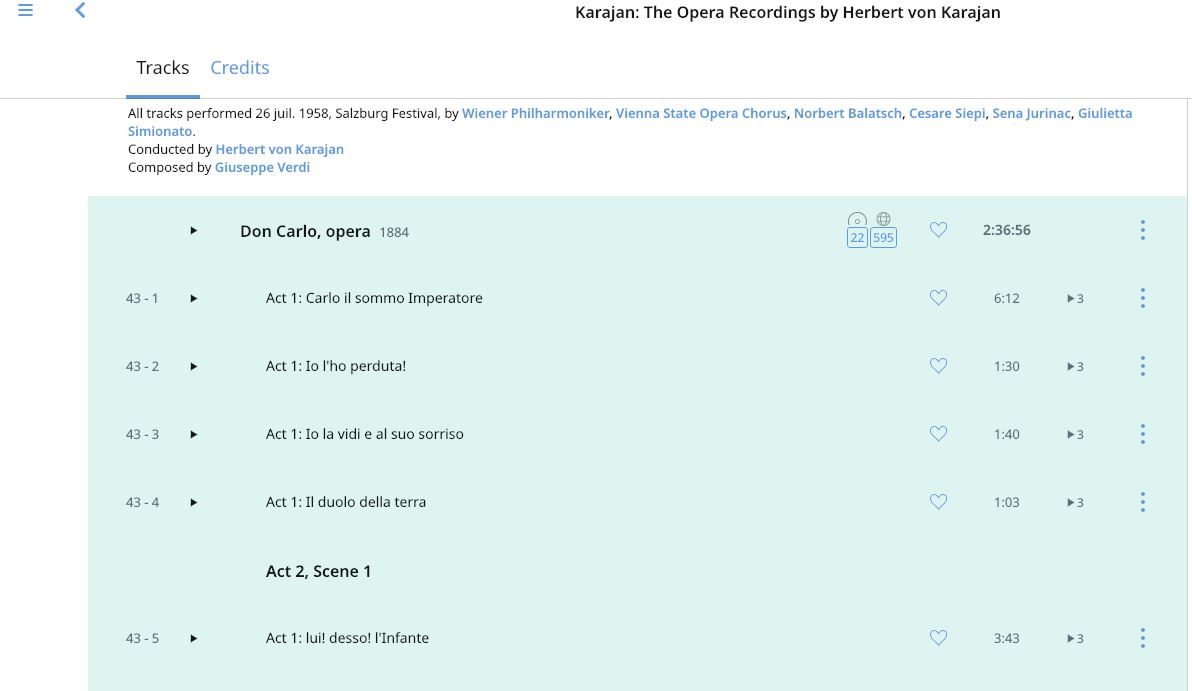 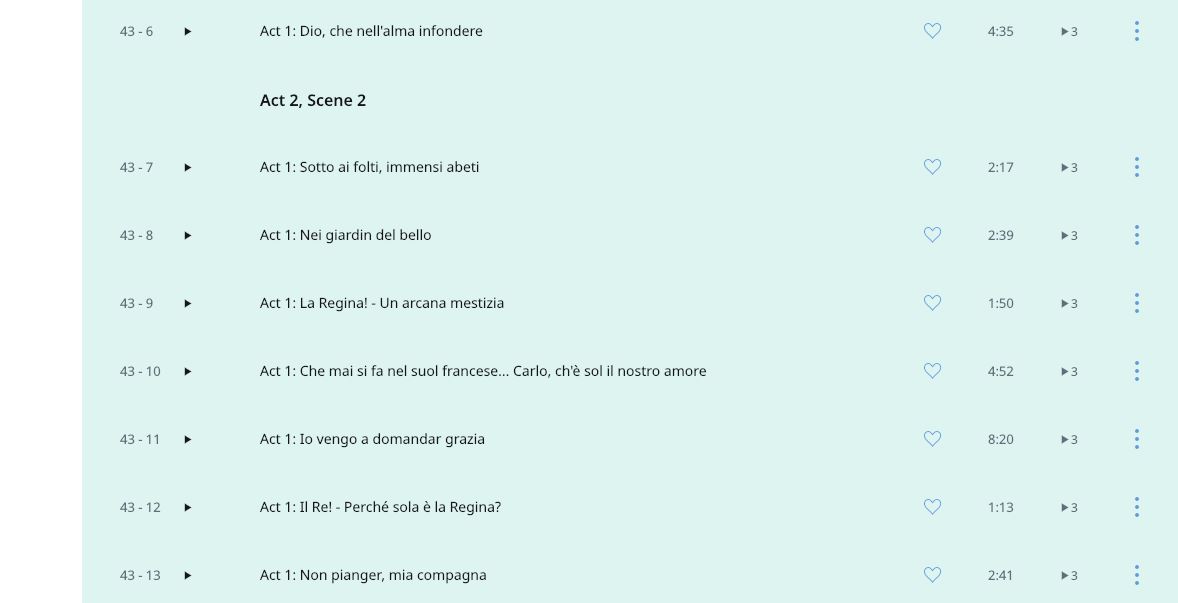 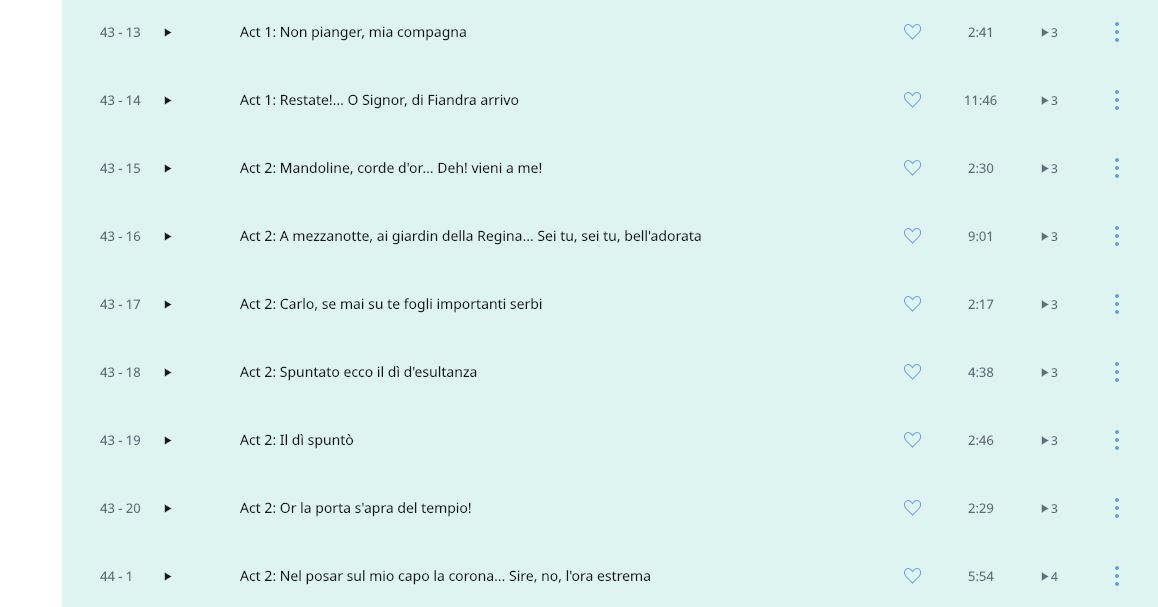 Please note that the act/scene numbering as presented in the album track titles page is 100% correct, and matches exactly with the booklet contents (please see my first post where it is reproduced). Roon does not manage data . So, am I wrong to say that those data come from Roon providers ? IMHO, your provider (likely AllMusic) do provides you with good metadata, and it should prove very easy to extract those act/scene indications to present correct act/scene groupings on the album page. The algorithm used by Roon appears to totally ignore those good metadata. Rather, it tries to infer act/scene groupings from the part list given on the Don Carlo composition page. For reasons given in my first post, this approach is doomed to fail miserably, as is the case here, whenever an opera has many versions, and where music directors exercice their freedom to retouch the libretto. The part list given on the composition page is valid only for a given recording of a given opera version, and very unfortunately, the provider of this part list (AllMusic I assume) does not indicate where this part list comes from. If there is an error on the part of the providers, it is right there, and this idea of a “universal” part list for a composition should be dropped. Reaching out as you say the metadata provider to fix this bad metadata issue amounts to ask him to provide a partlist specific to every different version of the opera in its catalogue of recordings. This would in turn require the provider to support the concept of “variants” for a given composition. We all know that AllMusic is particularly inept in this domain, as so many of Roon users have complained in the past. I am afraid this will never happen. Reaching out to providers in this context may become a hidden way to simply ignore the issue. I hope this is not Roon intent.

The solution is to realize that the good partlist with accurate act/scene info is already there inside the track titles., not in inappropriate part lists as found on the composition page. So just use the good data the providers already provide to Roon, and modify Roon algorithms accordingly.

If you want me to provide more examples of similar issues with other opera albums, I will be glad to do so. Even if it takes a lot of time to put up a well documented case. Because I really want helping Roon to improve.