Ok, finally downloaded and installed Roon. And I encountered my first major problem.

Problem: each track is named “untitled track” per Roon metadata. Despite forcing Roon to accept my file name as “title” in the Metadata Preferences and Edit tabs. No go.

But, the track title appears correctly in the player pane at the bottom of the Roon window. 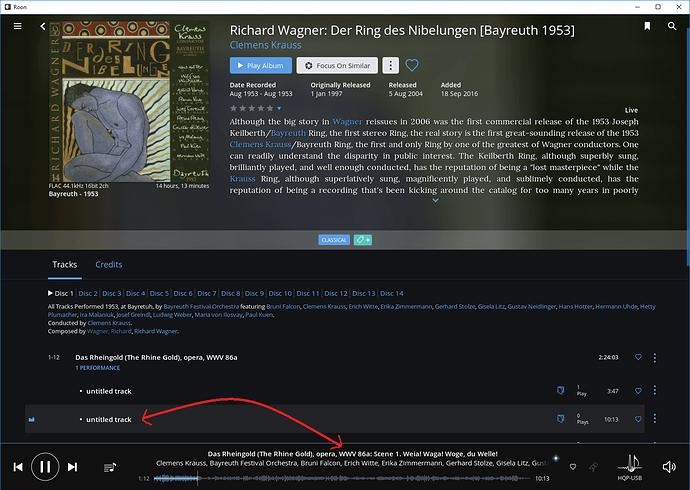 Thanks for the report @Argopo – I took a look at our metadata service and I’m not sure what’s going on here.

I’m going to consult with @joel (our metadata guru) and get back to you.

Thanks for looking into it.

I think we found the issue

We’ll get this reported back to them. Thanks @Argopo!

Why has this not been fixed? It has been over a month?

Who exactly is dealing with metadata issues like this?

If it is not Roon Labs’ responsibility to fix these metadata issues, then why should anyone bother reporting the issues here in these forums?

If it is All Music that is responsible, then who am I supposed to contact there to fix the problem?

I have various metadata issues I am dealing with right now, which seems to be the fault of All Music, so I do not want to waste my time reporting them here if nothing is being done to fix problems.

How many people actually work at All Music? 1, 2?

Why rely on a service that has no interest in fixing problems.

AND MOST IMPORTANTLY, WHY CAN’T I FORCE ROON TO ACCEPT THE METADATA IN MY FILES?