Multiple album covers for one album

Again, this is not a big deal, but it would be nice to be able to do this for albums that got a new cover when they were remastered, like the Holger Czukay & David Sylvian albums Plight & Premonition and Flux + Mutability (where I tried and failed).

Is there a (simple) ‘How To’ available somewhere?

My experience has been that extra art needs to be in separate files within the music folder. I think YATE has a way of doing that. Maybe Save Artwork to Folder.

Ha, yes, found it! Now a re-index and see if it does the trick, thanks!

Whoohoo! That did the trick, thank you! 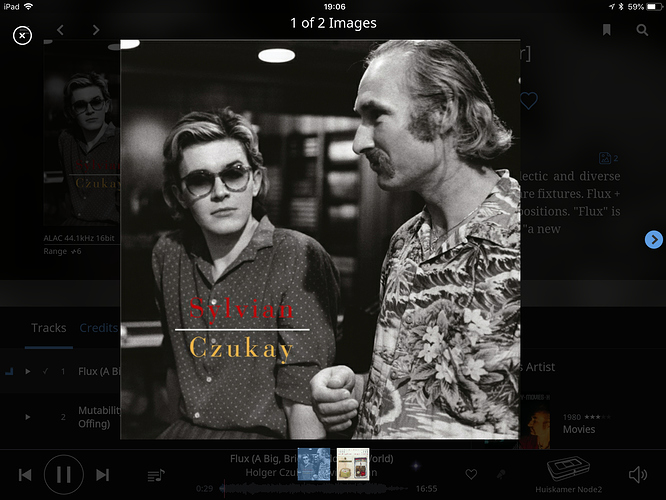 A map of an album can only have one cover art, naming cover.jpg or folder.jpg unless you are tagging different covers into several music files (flac or other music files)

Yes, that is true, but in most to all cases I need only one alternative piece of cover art, so for me this solution works perfectly.

It would be nice if you could somehow embed the entire original booklet in your files, but I’m sure that one is already in the feature requests

Be careful of what you wish for.

While storage is cheap, having one set of art per album is usually more efficient. But it can be done already; just don’t know how Roon treats embedded art.

I know, and I try to keep the embedded art as small as possible (though large enough for decent resolution, typically around 250-300kb).

A few years ago I read an article about this in an online American hifi-magazine (but can’t remember which one) where the author actually listened to the optimum size of embedded artwork. I thought it was way too farfetched, but he said that embedded artwork should not be bigger than 800x800px. That’s right, pixels, not kilobytes. Hence the farfetchiness. But still, somehow, I have always tried to keep my metadata as clean as possible.

Adding a small’ish’ extra img-file to the album folder doesn’t realy make it too bulky, and I only need this for a small number of albums.

Original booklet img-files (if that ever becomes an option in Roon) should be stored in the local Roon library, instead of being embedded in the audio file. That will inevitably make your library bigger, but that would be an acceptable trade-off afaIc…