Suddenly, some of my favorite albums are no longer available from Qobuz.

This is not unexpected as I thought Qobuz was like an Amazon Prime for music streaming. However, I am not even able to purchase those albums from Qobuz anymore.

On the other hand, these albums are still in Spotify, which has a much larger library anyway. This makes me want to rethink my music strategy. If the streaming services are flaky perhaps I should rely more on Spotify and local music. Now, Roon does not support Spotify, should I even bother keeping it for my tiny local library? The Roon software is awesome though…

This has happened a (very) few timesto me as well. There are luckily enough other sources to buy these albums if you really want them, at least that’s what I do.
In some particluar cases, I even bought the CD via Discogs and ripped it into my library.

I wonder if there are regional restrictions involved.
Could you provide some examples?
Dirlk

Yup, it’s to do with distribution rights. Label and artist rights.

Also noticed it on Apple Music. Sometimes you will notice that whilst you can still find the album, you can’t play all songs.

For me that was the reason to end up with Apple Music services. Overtime many of my old purchases either disappeared completely or became 1 or 2 songs in album…

I presume it’s also to do with how much the streaming services pays the artist.

A very good example are Rammstein. AM and Spotify have their entire catalogue, whereas Tidal and Qobuz have nothing at all.

One example: most of Lyube’s albums disappeared from Qobuz.

Just searched qobuz (native no roon) and there are a lot of albums as of now.

searched qobuz and no albums show up

you are right, what the … kinda pointless really

Try searching for Любэ́. There used to be like 20+ albums.

If the streaming services are flaky perhaps I should rely more on Spotify and local music.

Spotify is not immune to this. This is the way of all music rental services; they are all at the mercy of the contracts in place. If you want something permanently you have to own it locally.

Until a few months ago, it seems like all the tracks were on an album if the album was present. In recent months, I’ve found tracks unavailable on albums from Qobuz (my streaming service) - at least when played by Roon. This is a very unwelcome development.

A few weeks ago, I listened to the whole album Tea For The Tillerman2, which was recently released by Yusuf, formerly Cat Stevens. I settled in to listen to it again a few nights ago, but this time only the first track played: Roon couldn’t access the other tracks. Worse, there was no way I could discover this in advance of the track not playing. It seems like I should be able to tell what tracks I will and won’t be able to access from the user interface.

Is this also about artist rights? (As opposed to some technical glitch?) Has some dispute been going on recently? Is Tidal any better?

I guess buying the albums will be the only defense. At least it is relatively painless on Qobuz.

On the other hand, if I start using Spotify more and more, I may use Roon less.

Yup, it’s to do with distribution rights. Label and artist rights.

How I discovered lossless music in the first place

I was saving all these albums and songs in Amazon Music Unlimited years ago thinking that I could add whatever I wanted and listen to whatever I wanted for cheap. Until one day I went through my added songs and some were blanked out. I thought it was a one-off thing and went about my day re-adding those songs. As my virtual library grew, so did the amount of songs that would suddenly go unavailable every week. Months later, it got to a point where over 200 songs would be unavailable every week so I called Amazon support to ask them what was going on and no one knew what I was talking about. Fast forward, I spoke with a senior manager at Amazon Music and they told me when licensing contracts expire and the artists/label forgets to renew or does not want to renew, Amazon Music is legally complied to remove the ability to stream their music until the artist renews the contract. Spotify is the most popular music streaming platform and usually pays the highest per song streamed so many artists/labels setup long-term contracts with Spotify. With other platforms, more artists/labels are hesitant to sign long-term contracts so they sign short-term contracts with Amazon Music, Qobuz, Deezer, etc. This is why those platforms experience music disappearing issues and is the reason I decided to build up my own local collection of music so I have control of what I own and do not have to worry about licensing contracts taking away the music I love. Imagine you built up a massive online library of 400,000 songs, now all of a sudden, 2,000 songs start to disappear every week and you have no control over it. I would be infuriated.

Spotify, which has a much larger library anyway.

Do you have a source to back up this claim?

It technically does, they have longer contracts that keep all of the music constantly on Spotify. Many less popular artists usually from Bandcamp/Soundcloud, release music only on Spotify which I find to frequently be true. Amazon Music, Tidal, and a few others do something called duplicating, where they take popular albums and make different versions so that there are much more songs on their platform, boosting the amount of music they claim to have. I mention Amazon and Tidal because they are the most notorious. Examples are below, Tidal & Amazon duplicating Beth Orton’s album Trailer park four times! 11 songs become 44 songs in their calculation. 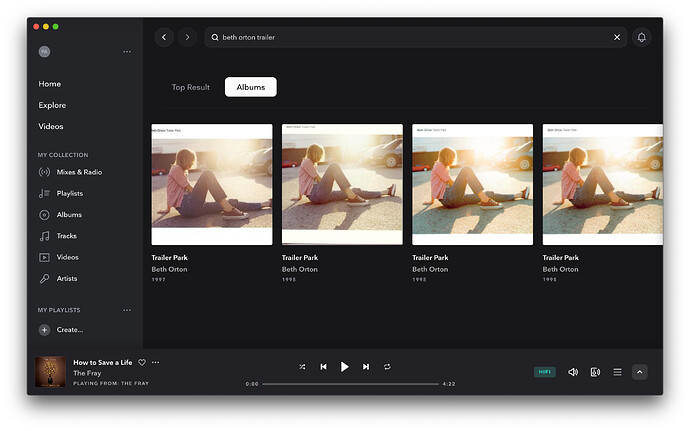 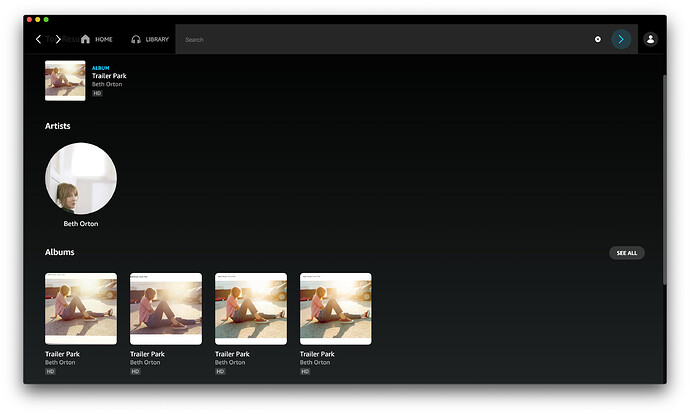 I went back to Tea For the Tillerman2 last night, and the tracks were again available. I presume the inability to access those tracks must have been due to a technical glitch, not a copyright issue.

It’s happened to me a few times, typically albums that were available in full change so that some or many tracks are unavailable. Seems to hit some Harmonia Mundi albums. But it also happens the other way around; an album is launched with one or two tracks available, then a few more, then the whole lot. Unfortunately Roon doesn’t realise that tracks have become available, you have to delete and re-add the album. I guess copywright issues account for some of these issues.