I have noticed that, from time to time, someone makes a feature request to have music visualization incorporated into Roon. While this might be against Roon’s mission statement, sometimes one just wants something pretty to look at. (.Y.)

The following is the kludgey way I have accomplished that.

Strike up the software (don’t forget to specify USB microphone as input). Start the music. Enjoy hours of visual excitation.

BTW - A note to Roon developers. SoundSpectrum packages can also ‘hook’ natively, i.e. no mic needed, into many media players. Some of those media players are Windows Media Player, iTunes, Winamp, RealPlayer, MediaMonkey, and that player that rhymes with shiver. Just saying ….

I love visualisers. Except this will trigger when anyone speaks in the room. I think I can send a signal from my pre-amp (3 outputs, 2 used) into the sound card on my PC.

Then all I need to do is dust off the bean bags, lava lamps and fondue set !

There is an easier way. Use the zone function to group the standard soundcard output on the display machine to your bit perfect output. Then enable “what you hear” on the Windows sound settings. Hook Soundspectrum to “what you hear.” Software driven! You can even use the sync/delay feature in the Roon zone settings to calibrate the visualization.

No additional hardware needed. This also works with the drive-bay LCD and LED displays that were around 10 years ago, make your computer look like a full-fledged old style piece of audio gear. 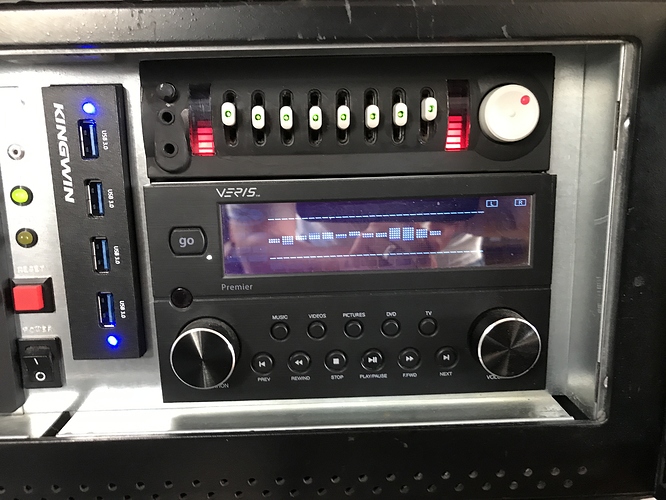 No, I don’t use the EQ functions. Just for the bouncing lights. But the transport keys all work.

Thank you to all who posted helpful information in this thread & others, the solutions did not work for me, but the help did lead me to a solution.

I assume coz I’m using a laptop, any non-mic solution posted that I tried also output audio through the built-in speakers as well, not just through the stereo.

But thankfully, in the platinum packages sound spectrum includes a “virtual cable driver” (windows only option during the install process that is NOT selected by default), this works great to drive the standalone & v-bar, without activating the inbuilt speakers.

& yes, ty to Jame_I & roon, I have even been able to eliminate the 10ms delay

I have used sound spectrum visualisers for many years, I do still miss the track titles & cover art that displays on the visualizers when using them with proper plugin integration with the media player.

So I have arrived at an almost but not quite perfect solution, very good, but it would be nice if roon worked with sound spectrum to offer their products as an optional extra for a cost, seems like a good opportunity for a revenue boost for both companies.

What happened to the music visualizer … digg.com/2019/spotify-music-visualizer