Hi, i imported all my library from Qobuz to Roon using Soundiiz. Even though i only had around 50 albums in Qobuz that i had ‘liked’, in Roon i have over 4,000 albums. Checking again in Qobuz and there are only 50 liked albums. Anybody know why this mismatch happens? It looks like every song i ever liked in qobuz has resulted in that album being liked in Roon.

And does anybody know how i can unlike or delete the Roon albums contents to start again with a blank list?

So check on your liked tracks.

Thx, is there any way to not have that happen? And any way to clear the albums list so it’s blank?

Even if you heart 1 track, Roon will pull the album info in as Roon is album based and tracks are connected to the album they are from.

You can use hide to specifically hide albums you don’t want to see.

Yet more senseless roon logic - i decide I like a song - roon decides I like the whole album! Brilliant! For Roon’s next trick - like an artist and Roon will like anyone they ever played with!

This is very subjective. Roon made a judgment call here. There is no right answer, but for my taste, Roon absolutely made the right choice.

To your comment, Roon is not inferring that you like the whole album. They are just offering you the option to find those tracks based on the albums they below to. In fact, when you click those albums, you’ll see that only the tracks you liked have been added to your library.

If I want to find a track I will look in tracks - not in albums. I’m glad it works for you, but it makes no sense, and most likely most people would prefer it worked in a more logical way

Sadly not and I tend to agree, it’s a coin toss decision and I feel it fell on the wrong side.
But maybe the 50.01% agree with the Roon decision.

There are 170 million spotify users, another 80m tidal and 50m qobuz. That’s 300 million people who pay or use a music service that puts all the songs you ‘like’ into a list of liked songs, all the artists you ‘like’ into a list of liked artists, and all the albums you ‘like’ into a list of liked albums. Then there’s roon with 100,000 subscribers - or approximately 0.03% of the users worldwide who pay for a music listening service, who does it arse-ways. So yes, MOST PEOPLE (99.97%) are used to a logical, sensible, practical way for these things to work. It is of course possible that ‘most’ roon users prefer it to work arse-ways but i doubt it - it’s much more likely that people just put up with this, just like they put up with all the other rubbish features of roon, because all that matters to audiophile dinosaurs is audio quality

…imported all my library from Qobuz to Roon using Soundiiz…

No first hand experience here, but can you rule out that your problem may be caused by the way Soundiiz handles the transfer?
Don’t shoot me, just asking…

No its no soundiiz, thx Marin

Well, by liking the track in Tidal, for example, you have added it to Roon. However, you have not yet liked it in Roon, i.e. clicked the heart.

And Roon is not adding the whole album trackwise, just the Album metadata.

You can use Roon by staying on the Track page and never venturing to the album page. If you don’t use that page why go
to it?

Now, if the issue is that there are albums you have and don’t want to clutter up your album view with those 1 track albums, then there are other options.

I mentioned hide, but, you could focus on albums with 1 track and then exclude them. This gives you only albums with more than 1 track, a view you can then just bookmark as well.

Sorry but that’s not workable, what if I have 2 tracks liked on an album. And why suggest I never go to the album page - there are albums I like to listen to. How else could I find those other than on the album page?

I’m afraid your suggestions are weak attempts to fix roon’s appauling logic in this case and nothing will work other than implementing it the same way Spotify etc do it. I think with 300million users it should be obvious that they have got this right and roon have got it wrong - sooooooo wrong!

I get your point. Before streaming became big I was used to the way Roon handles it. I guess it was in iTunes or even on the iPod and previous MP3 players.

When streaming services started doing it the way you like it, I didn’t like it. Over time I got used to it, but never thought it was the best way to do it.

But I’m back to my first comment. It’s a matter of taste. Spotify can’t satisfy you and I at the same time and neither can Roon.

Sorry but that’s not workable, what if I have 2 tracks liked on an album.

Filtering by Number of tracks is a variable, you could as easily set it to 3 tracks or less. or 8 tracks, etc.

Are nothing but suggestions as workaround to get to something workable for you. I am not arguing for or against Roon’s software development decisions. I am only explaining what it is and ways you might get to what you want to see in the current framework.

If you want to suggest changes, then I suggest a post in Feature Suggestions.

I’m quite new to Roon, but I don’t understand something. You talk about ‘like’ albums, yet in Roon there’s a difference between Albums added to your library and ones you ‘favorited’. Is this what you’re looking for?

These are the albums in my library: 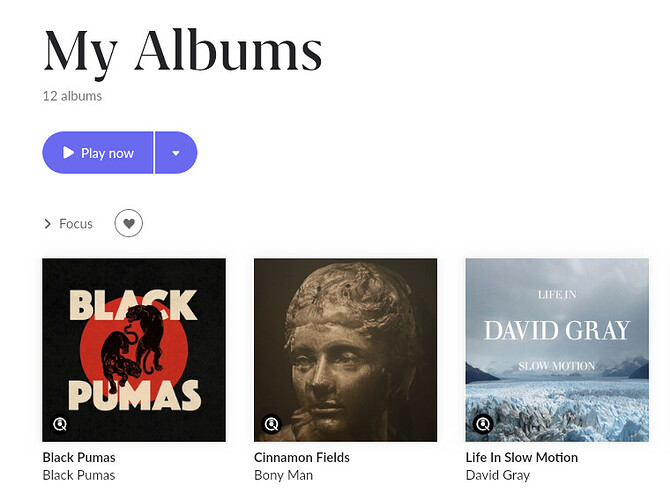 Yet only one of them I marked as favorite/liked: 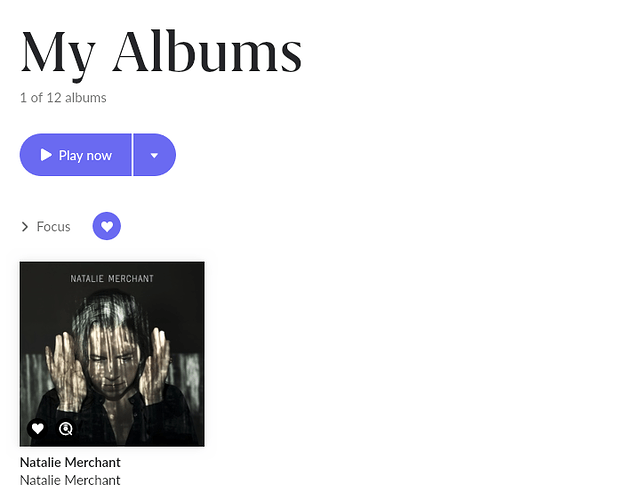 Even though I did mark a track on another album as favorite, that album doesn’t show up here.

This seems to work thanks! I would have expected roon to tell me this!