I just noticed something strange and hoped that perhaps @Carl or @mike could provide confirmation. Back in the beginning, I seeded my Roon collection by doing what I believed to be a native file export of my Sooloos collection to a NAS, which Roon accesses. These files were all carefully ripped to flac via dBpoweramp originally and then ingested into Sooloos. What I just noticed was that all of these files (apparently) show a reduced bitrate in Roon–Track Info shows 44.1/16bit, as expected, under File Info, but File Tags shows a bitrate of generally about half the expected roughly 1410 one expects for Redbook (they seem to be in the 700-800 range, but are not consistent from track to track).

I’ve done some testing and have re-ripped a few of those same Sooloos-based albums (using same drive and dBpoweramp), moved them to the NAS directly, and can compare them side-by-side. The new rips all show the correct ~14.1k bitrate in Roon.

So my question is whether my experience is unique or typical? Did the process of ingesting them into Sooloos modify those original flac files in some way (I was under the impression that was not the case). Or does the native export modify them in some way that would explain the reduction in bitrate? Or did I just screw up the export somehow myself and need to revisit that process, since I still have my Sooloos setup intact “as a backup.” If it comes to it, though I dread the thought, I can re-rip everything that went into Sooloos originally.

Thanks for any light you can share on this topic.
Jerry

@jpowell I have the same on files I exported from Sooloos, however I also have it on files I have ripped and added to Roon rather than exporting from Sooloos.

The files showing the higher bitrate seem suspect - if using FLAC, the bitrate should be approx half the original file bitrate.

Might just be the difference between programs choosing to record incoming or outgoing bitrate into the tags.

Check file sizes are approximately the same as the ultimate proof - but will be very slightly different (amount of data in tags will change) - assuming both are FLAC compressed.

1411k is for wav files, 800k average for flac files sounds about right (wave will display the bitrate as constant, where as flac bitrate is variable).

Thanks to all for your quick responses. Based on your comments, I went back and tested a variety of scenarios and I’m sure confirmed what you already realized–that flac files reflect a bitrate that’s proportional to their level of compression, something that I certainly never realized. For example, I took an original Sooloos-export-to-Roon file, that was probably compressed at something like level 6 flac (I can’t recall exactly), and uncompressed it. The compressed version shows bitrate 818 and the decompressed version shows 1417 in Roon. Ripping from the original CD to uncompressed flac, which is what I tend to use these days, also yields 1417. Ripping that same track to flac level 5 yields 751.

Does this just mean that the bitrate is evaluated essentially before the file is processed to PCM by Roon (have I got that right?)? And that it therefore has no audible impact? What got me started down this path originally was playing back some Roon-exported files on a friend’s system via JRiver–and he noticed that my files had this “greatly reduced bitrate,” with the implication that they would be reduced sound quality.

Yes. That’s how FLAC files work. And once the FLAC, of any compression, is decoded back to PCM it will be 1411 (CD).
edit: not sure about the 1411, as roon converts to 24 bit PCM. But anyhow, any FLAC file is decoded back to the full PCM file before playback.

Thanks. I appreciate the information!

Can you explain what you mean by this please? If it were true that Roon converts CD rips to 24 bit that would seem strange or a bug.

I’m a newbie at roon and not 100% sure where I saw this. Maybe @mike can answer/explain?

I’m trying to locate where I read this on the roon site, but somewhere I thought I read that roon takes a 16/44.1 FLAC file and then converts it to PCM file with 24bit and sends that on to the player. I was more concerned about the wasted bandwidth on transporting PCM to player (vs the compressed FLAC, letting the decoding take place at the player, like a Squeezebox does by default). The 24 bit part didn’t surprise me as, for example, LMS is streaming at 24 bit even though 8 of those bits are zero (if flac file is 16/44.1), but it allows some room for the digital volume adjustments.

edit: Or maybe I just think this (see pic) because I’m seeing this (just doing playback on my windows desktop) 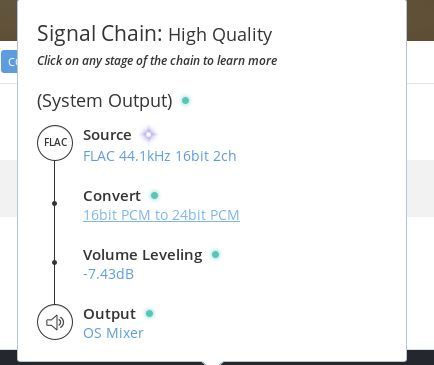 Playing around with my output options I see that I don’t always get that 16 to 24 PCM conversion. So I was wrong it seems. But now I’m having trouble with roon seeing any of my PC internal audio because I’ve clicked on stuff in the audio settings related to my PC related players (in roon settings). So I’m off to investigate that.

Could be because you have volume leveling on, that requires bit headroom.
If you don’t do volume leveling, there is no volume control on the server side so no need for headroom.
And I have never seen it.

Roon keeps showing clever stuff in the nooks and crannies!

Yep, that’s it. I tried it with and without and only see the upconverting with volume leveling turned on. See pic.

One question I still have (and my search didn’t find an answer) is whether my FLAC files are all being converted to PCM before sending them over the network to my endpoints (some of which can handle the FLAC files directly, eg, squeezeboxes).