I made some configuration changes in the last few weeks which resulted in a network cable becoming free in my set up. The cable in question is the Wireworld Starlight Cat 8 Ethernet Cable. It’s the red flat cable but I bet this could work with any quality cable. I run Roon on my QNAP TVS-471. I have been running it there for almost two years now. When I set up the NAS I used whatever cable was handy. In this case it was an elcheapo network cable. It was what was near to my hand at the time. I forgot all about it. Today I swapped the elcheapo cable for the Wireworld cable. I cannot believe what happened next. Suddenly any time I access the QNAP from the GUI is happens in an eye blink. Much faster than with the cheap network cable in place. Also I tried loading Roon on my laptop and again on my iPad and bam it happened super quick. I am not sure what I was trying to accomplish by rewiring the NAS except to use the Wireworld in a place where I thought I would get the best benefit and I guess I accomplished that. I am super impressed and I don’t impress easily. Just wanted to share my experience in case it benefits others.

Gigabit devices need gigabit cables (4 pair, Cat 5e or better), otherwise they will auto-negotiate to a lower speed - as you found. As long as a cable is correctly marked, the manufacturer should be irrelevant.

Not crazy at all.

If your elcheapo network cable has 4 wires, it’ll run at 100Mbps instead of 1000Mbps.

Even if your elcheapo network cables has 8 wires but is not designed for 1000Mbps operation or its quality is poor, it may also run at 100Mbps instead of 1000Mbps.

It is usually possible to determine whether a network cable is running at 1000Mbps or 100Mbps, by checking the LED color of the network port at either or both ends. With certain devices (e.g. WiFi router) they may even have a GUI display of the network status of each port.

Yup. I should have been paying closer attention when I set the NAS up. It was lazy on my part and now I know better. The old cables in question are now in the garbage pail. There was no marking on them at all. They were just flat while ribbon cables that I think I acquired with my Sonos system years ago. They probably were just 100Mbps since that’s all the Sonos stuff is.

@John_Aiello one way to check is to put the original cable back in and look in the network interface settings to see what the connect speed is for that port. it should also have all 8 pions wired, 4 pins is only probably cat5 at best and 100mb only a cat 5e or less can be distinguished bt the layout of the wires…all in a line is below cat 6 up/dn/up/dn/up/dn/up/dn when looking at the end of the wires in the connector is cat6 and above connector.

here is my synology with 2 different cables 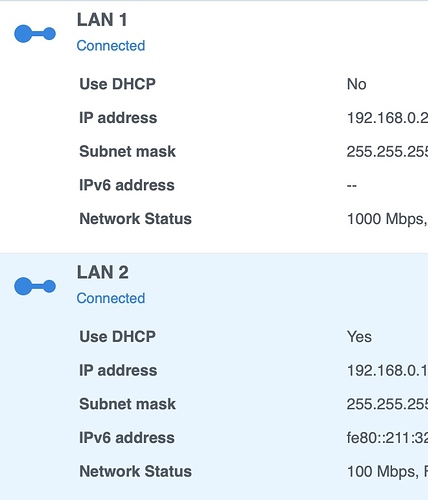 I bought a couple of cat8 fancy looking cables off aliexpress for about $40, and compared them to the standard cat 5 cable I was using. I thought I could hear a difference but suspect it may be more phcological then anything else.

I then borrowed from a buddy the AQ Vodka ethernet cable. Yes it looked cool, with chunky connectors, but maybe it’s my old age, but again if there were differences, its very subtle.

Now, experimenting with different analogue cables, there I will stick my head out and have found ones that I prefer over others.

‘Crazy but true’ that 4 years later this thread is still open.