Taylor Swift has a new album that dropped last night. It’s not available through roon, however. If I add it as a favorite in tidal then refresh my collection in roon, it still doesn’t show up. It also does not show up on the artist’s page.

Always been very slow syncing new content. A pity, since I love new music Fridays. I can never use Roon to go through the new stuff I’ve been waiting for.

At least the new Naked And Famous is available.

Same problem on Qobuz. It’s there in Qobuz’ own app, I can favourite it, but it won’t appear in My Qobuz favourites in Roon, nor will it if I search.

Hey everyone. The problem with an album like this is that it was an unexpected drop and, when this happens, even the streaming services get caught on the hop. With Roon’s deep metadata integration, there is a lead time from our receiving the information from TIDAL and Qobuz and it going live, as we build, test, and deploy Roon metadata.

Four TIDAL versions of Folklore are now available in Roon in all TIDAL regions (clean vs. explicit and --probably-- 16/44 vs. MQA). We didn’t get the Qobuz metadata in time for today’s Roon metadata release, but it’s likely that the Qobuz versions will be available in approx. 24hrs, though I can’t say for sure.

Note: To find this album, you’ll likely need to go to Taylor Swift’s performer page in Roon as it’s probably not been indexed for search quite yet. Or… you can favourite the album from one of TIDAL’s apps.

Now playing this album. Found it in the TIDAL page in Roon under New Albums. Nice album by the way.

Also found the album in Roon from the Tidal/ New Albums page and it’s playable. But when I try to add it to my library I get a “This album has been deleted” message. Is this also a consequence of delay in indexing? 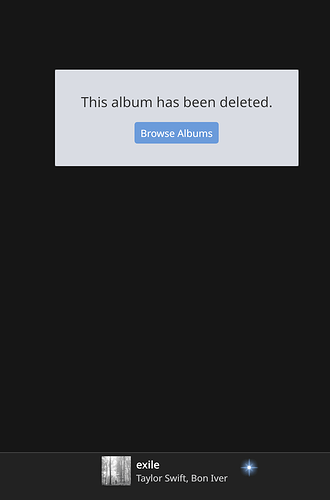 I had that problem too. I fixed it by removing it from favourites within Tidal first, then adding it back within Roon.

The Qobuz releases didn’t arrive in time for yesterday’s Roon metadata update, but they should be there this evening (GMT/UTC).