The lag is being worked on and has to do with how Roon processes our metadata. If there are releases you simply cannot wait on, it is entirely possible to play those through the TIDAL client in the meantime.

And whilst this discussion rumbles on … let’s not forget David Bowie - In Memoriam.

Yes @palbratelund , but for some reason the Tidal app still doesn’t do gapless playback (which is critical for some album listening) and also the iPad app doesn’t allow playback to your stereo, but only through the iPad which makes it tough for people who have a headless setup… just a couple things I believe Tidal needs to improve on.

Clients are gapless. Have you updated in the last 6 months?

That’s great news I didn’t realize, it’s not gapless on the Oppo app player when I last played… how about the iPad app to have playback to your stereo and not just iPad (like Spotify has).

What terrible news to wakeup too… I’m shocked.

Our clients are gapless. Not all partners, but that’s down to their own implementations, or the limitations of the third-party solutions they may run. But TIDAL clients on desktop and mobile are gapless. And of course - in Roon.

And regarding Spotify Connect - we were considering the same type of solution but ditched it. There are many solutions coming now that does this better than that. Google Cast is one. Roon Ready.

Thanks @palbratelund, although the Google Cast doesn’t really help in a headless setup and with Roon Ready the lag issue may still be there for some albums… I realize the headless setup is probably a small amount overall though, but something that Spotify connect is perfect… to be fair I really am only going to use Tidal on Roon anyways as a lifetime member I really do love it, so it’s important to me that this lag issue is reduced to a minimum.

We are working on that to optimize the flow. Anything is always available through our API when it is supposed to be visible to partners, but Roon adds a lot by processing the metadata. We are looking at strategies to make this as real time available as possible.

@palbratelund, the iPhone app isn’t gapless. Well, actually there’s no gap because it tends to mash the end of one track into the beginning of the next. Most obvious example would be Frank Zappa’s Sheikh Yerbouti.

6 posts were merged into an existing topic: STAGING #1 - Used When Reorganising Topics

Second that. And sometimes releases come in to us a heartbeat before it’s supposed to be out. Just try to compare it to when you had to go to a record shop and they had to order it, haha.

I loved the record shop experience…

I loved the record shop experience…

Yeah, I have to agree. I still drop in to Basement Discs here in Melbourne to get Australian artists that aren’t available through Tidal. I sort of don’t want that to stop, even though it would be much cheaper for me if Tidal covered the field.

I added this album on Jan 12 but still don’t have any metadata for it. Is it just me?

I have got a small amount of meta-data (the album is identified). For example in Album credits 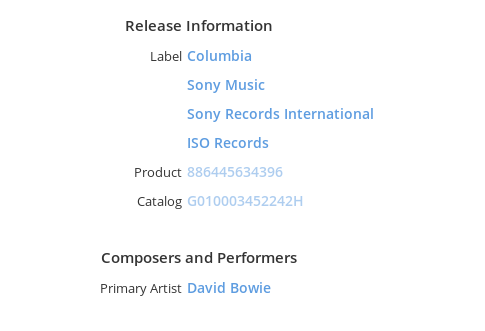