I am assuming that the HomePod being released on Friday without Airplay 2 will act as other iOS devices do and act as Roon endpoints?

That would be amazing if true. It would, however, undermine Apple’s strategy of boosting Apple Music membership.

Homepad is being released with Airplay 2. However, it will not have either stereo setup or multi-room play. Where did you see otherwise?

they use the word when a lot!

With Wednesday's release of iOS 11.3 and tvOS 11.3, Apple is slowly rolling out support for AirPlay 2, a hotly anticipated wireless protocol that allows users to stream music to, and remotely control, multiple devices in different rooms.

is there a way to use Siri with the HomePod to control Roon? (Not for output through the HomePod but any Roon zone?)

This isn’t the worst news ever, speaking of the Homepod: 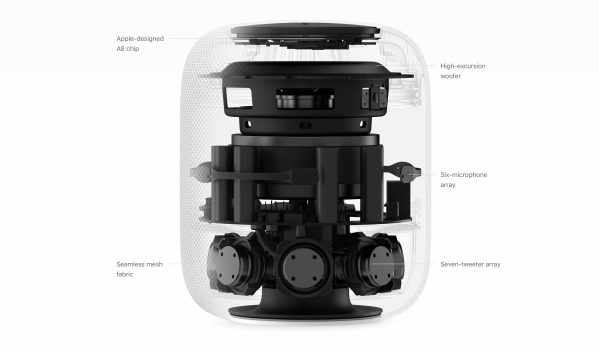 HomePod specs are indicating that Apple is serious about the audio quality on the device. Today, we’ve discovered that the smart speaker will support FLAC out of the box.

It’s not even stereo capable (yet).

I seriously doubt Apple has any interest in limiting what can use the HomePod. They haven’t done it with anything else. Apple Music is a feature to them not a prime mover or even a major profit center. I’m OK with no stereo pairing initially as its very omnidirectional. Stereo pairing is not far behind, some reviewers have already heard it.

The HomePod is being released with Airplay 1 and Airplay 2 and stereo pairs are coming shortly after release.
I ordered one and will be trying it out with Roon. My guess is it will not be an issue.
I’m currently using Roon with Apple TV, Kef LS50W speakers, and a set of paired Sonos Ones. The Sonos Ones will be going away. The sound quality is not great and I’ll be glad to dump Alexa and it’s privacy issues for Siri and Homekit. I’ll report back here after getting it on Feb 9th.
Here is a good Reddit thread on HomePod from someone who knows what they are talking about. Of course it’s Reddit so its full of uninformed comments and apple conspiracy theories.

r/audiophile - NDA is up. What can I tell you guys about the HomePod?

Indeed, normal AirPlay is confirmed to work on the HomePod, with AirPlay 2 coming soon. Here’s another article that clarifies a lot of how it works: Confused about what HomePod can and can’t play? Here’s the breakdown.

Apple updated the HomePod product listing to clarify which audio sources will work with the device. Here’s the official list:

Does this mean iTunes/Music(iOS) will someday (soon?) play FLAC files, I hope…? Would be great to have high-res on those unfortunate occasions I can’t use Roon.

Highly unlikely. You can have hi-res via ALAC or AIFF files now. Just convert your FLAC files on computer.

Always be careful when starting a suggestion with “just.”

I know I can convert them to ALAC or whatever. Not really what I was getting at, nor practical.

The HomePod supports streaming FLAC, which is indeed interesting. I initially assumed this was for full AirPlay compatibility with various devices and services, but I believe AirPlay transmits post-decode (from AAC, FLAC, or whatever), in which case FLAC support would be for something like eventual third-party app support directly on the HomePod. Again, assuming I’m right about how AirPlay works.

iOS devices were also updated to natively support FLAC with iOS 11, I believe.

I’d love to see Apple Music add a lossless tier, especially since they’re making a push into (claimed) great sound quality with the HomePod. I like a lot about Apple Music, especially their editorial sections and discovery features, but on great speakers or headphones, I really do want that lossless sound.

but it’s not a hub to the ‘ultimate system’. AirporteExpress always streamed flac.

If Airport Express always accepted FLAC then that suggests that indeed AirPlay already sends in its own format, and whatever the source player is is converting from FLAC or whatever other format. So the new aspect here is HomePod (and iOS) supporting FLAC natively. Interesting.

AirPlay allows you to wirelessly stream content from your iOS device or Mac. Now with AirPlay 2, you can fill the home with multi-room...

The following are some excerpts that pertain to the buffering approach and codec’s that are supported, etc:

“So, what am I talking about with enhanced buffering in AirPlay 2? Well, as the name implies, we’ve added very large buffer capacity on the AirPlay 2 speakers. Here I want you to think minutes, not seconds. Additionally, we’re able to stream the audio content from your app to the speaker faster-than-real-time. And I think the benefits of this should be clear. The large buffering on the AirPlay speakers will add a large degree of robustness to the AirPlay session. You should be able to survive more typical network glitches, like walking, taking the trash out, or walking to the dead spot of the house, or even microwaving some popcorn. Additionally, this should provide more responsive playback experience. The real-time nature of existing AirPlay means that there’s a fixed output latency that is related to the buffer level on the AirPlay speaker. So, when you hit play, with AirPlay 2 it should play a lot faster. When you hit skip, it should skip a lot faster.”

“Let’s move on to the supported audio formats in AVSampleBufferAudio Renderer. So, what audio formats does the AVSampleBufferAudio Renderer support? Well good news, basically all platform supported audio formats are also supported by the AVSampleBufferAudio Renderer.
So, this includes LPCM, AAC, mp3, Apple Lossless, lots of sample rates, lots of bit depths. And additionally, mixed formats may be enqueued.
If Item 1 is AAC at 44.1 you can then enqueue that and then MP3 at 48k and 16bit Apple Lossless at 48 kilohertz. You can just enqueue the audio data from each of these back to back and we will take care of the format transitions for you. So, those are the supported formats. Let’s talk about the preferred formats.
So, because we can play anything just give us what you got. You have LPCM, give it to us, encoded give it to us. But one caveat there is all things being equal, if you have a decision between encoded or PCM, we would prefer the encoded, but don’t do any special logic to give us that. Just give us what you have. And we prefer interleaved channel formats and 1 to 2 seconds of audio per CMSampleBuffer.”

My HomePod arrived today… Zero issues with Roon so far, as expected.

The sound quality is far better than it ought to be for this sort of money. Listening to Kodo’s Mystery album is seriously impressive, the vocals and flutes all seem to come at different times and all I can say, is it doesn’t sound processed or fiddled with in any way. Very impressed. The drums sound pretty deep too, and clear.

apple’s audio division probably has more researchbudget than all audiomanufacturers together. And a focus like Philips and Sony in the 1970’s with their cd.