Please add a new keyboard shortcut: Ctrl-N (?)
To scan ALL folders for new and deleted music.
If you use a NAS is not as fast or not at all.
I want to play my new music and the road to the scanning department is (too) long each time.
5 Or more clicks if you have multiple locations where the music is.

This shouldn’t be necessary. Since 1.3 adding new music to watched folders has been immediate and flawless for me.
Perhaps we can help troubleshoot: 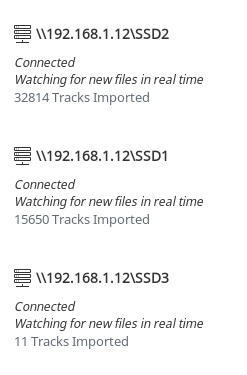 Do you have SMB3.0 enabled on your QNAP? It isn’t by default. 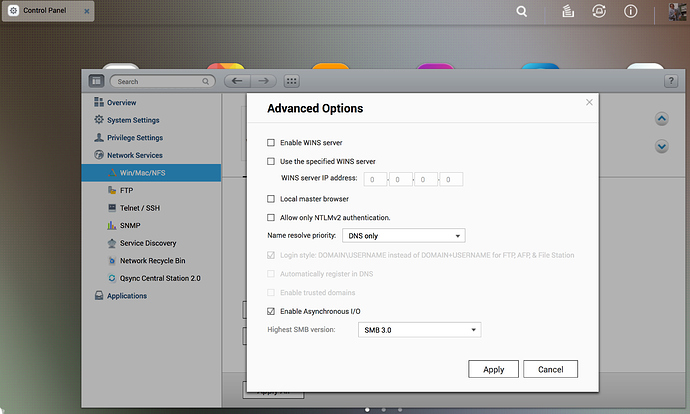 Then you should see the box above. Select SMB3.0 as the highest SMB version.

And let’s ask @support for some input.

This problem is well known to Roon.
I have talked about this also with Small Green Computer and he agreed that this is a problem.
Your adjustment was carried out but that does not fixed it.

My music is on a Synology NAS with SMB 3 enabled. I also have to scan manually.

Oddly only one of the SMB shares seems to actually be watched live but messes up and stops after a couple track every time and a partial album shows up with partial tracks and no album art. This is my largest share with at least 150,000 files. Forcing a manual scan after all new tracks have been copied on fixes the issue.

If I copy music into any of the 3 other SMB shares nothing happens at all automatically.

My core is on a 2012 R2 server. All 4 of the SMB shares were added with UNC path. Only unique config is I have disabled cifs 1 support on it, I’m a minimalist.

When I used iSCSI it was instantaneous.

I have it stuck in my head that this a common issue when using a Synology NAS, but I’d have to go digging to find a proper reference.

I can say that with multiple linux-based cores mounting shares from Synology none of them automatically find new music. This in itself isn’t a big issue since I typically add files in batches, but it is a drag to go digging for the rescan option. This is also the single-biggest question that I get from my customers running Roon… “I know you showed me this, but I forgot. How to I get Roon to re-scan?”

I’ve started adding music by dragging the files into the Roon Remote window on a PC or MAC. This works great, but I do lose the ability to curate the directory structure. For me this isn’t an issue anymore, but for a lot of people they like their folders to be a certain way.

I’m all for elevating the forced rescan function to a higher level in the UI. @mike, it might be worth re-titling this thread to make the real subject a little more obvious. It would likely generate more feedback that way.

Alt -F4 (CMD -Q) and a restart will force a rescan

Alt -F4 (CMD -Q) and a restart will force a rescan

Only works if you’re running Roon as your core and remote (windows and mac). Doesn’t work for a headless core (RoonServer on any platform).

yeah true… I had the exact same problem with a WD my cloud…went to roonserver on NUC with usb attached hd to finally solve it.

A force rescan button or shortcut should be added so that this can be triggered quickly.
I suggested this already in dec '15 but this never materialized …I went for usb attached storage as a result

Not much help to @Roony… sorry

Only the Roon team can do something about this…I hope.

If one gets added, it would be great of it refreshed Tidal too. I only use the iPad so would prefer a button somewhere, rather than a keyboard shortcut personally.

@mike, would you consider in an upcoming release how to force a rescan with fewer clicks? This problem hit home again to me with the pleasant deluge of new recordings over the holiday, especially when updating tags or correcting tags. Possible solutions:

Thanks. I would appreciate less friction when adding content. (Yes, I have a Synology NAS.)