"New releases for you" dropping the ball big time

I have 13 Atmosphere albums in my library. Tidal shows they released a new album the other day. Roon doesn’t include it in the “new releases for you” list.

What is “new releases for you” doing? It has a ton of albums from artists that aren’t in my library. But for an artist with 13 albums, their new album doesn’t even register. It should be the very first thing Roon recommends to me!

The killer feature I’m hoping for is to show me new albums from my favorite artists, or at least artists that I’m interested in. I am totally cool with Roon recommending unfamiliar things – I want that, in fact. But to not recommend an album that I’d obviously be very interested in, really seems to be missing the point for me. 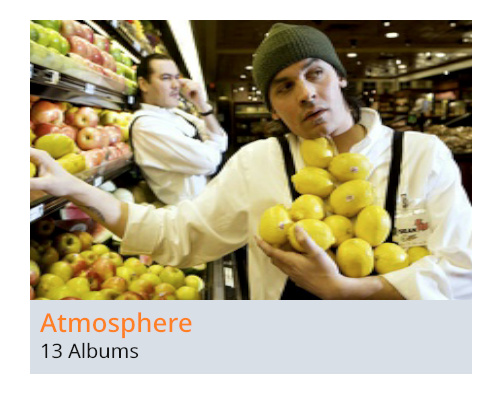 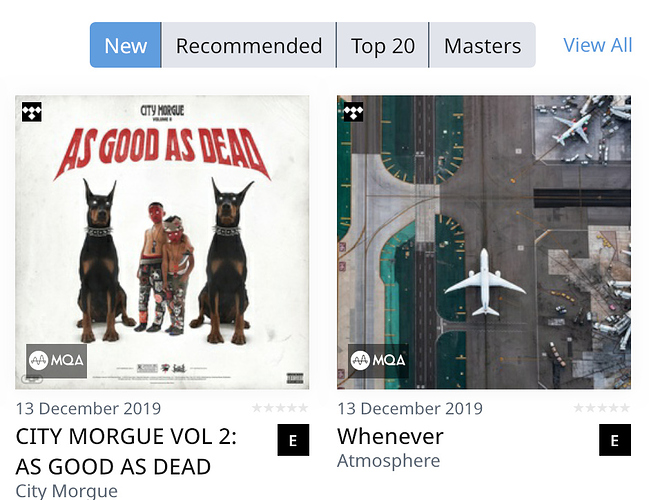 So far I don’t understand the recommendatios either. It is stiill early for a final verdict, it needs time but as of now more than 3/4 is very far of. Almost 50% is classical music while I never listen to classical music at home. Lots of christmas music while I never ever listen to christmass music. Lots of movie soundtracks, completely not of my interest either. lots of female vocal jazz also, just the kind of jazz I’m not very fong of in general. And last, lots of oldskool pop like the Stones, Garry raferty or whatever his name is. Absolutely not interesting either. So far I have only seen one or two albums to my liking compared to about 10-15 albums I liked that Tidal recommended me in the same period and about 25-30 albums that lastfm recommended me in the same period. Lets see where it goes the next month or two. As of now it couldn’t be further of my taste. I like to be challenged but not with average mediocre choices. Recommendations are also exactly the same in my profile as in my girlfriends profile, why? We don’t always listen to the same music. But no hard conclusions yet, I’m still giving it time.

I think the “New releases for you” is a miss. It does not seem to recommend based on the database, plays or likes, but rather recommends mainstream hypes (really, the Cats soundtrack?) and, IMO very important when you share Roon with several people in your household, it does not differentiate between profiles. What’s even worse: when I delete something I don’t care for from the list, it immediately disappears for every local Roon profile.

The profiles are lacking functionality or don’t behave as expected from a profile on more levels in Roon anyway, which makes it a pain to use with more than one. It would be nice if the Roon team made improvements in this department and make Roon a better shared experience.

Yep, this does seem to be either a bug or a blindspot. I had the same things happen with a new release from an artist that is very prominent in my ‘hierarchy’ of artist status. He was one of my relatively few ‘favorited’ artists, a substantial number of my most highly played tracks were from him, and I have every one of his singles/EPs.
To Roon’s credit, they have shown interest in a ‘miss’ of this nature.
I’m guessing now, but it could either be a flaw in the algorithm, or some lag in database updates. Regardless, it needs to get better.

Agree. I thought by now it would be better but it’s awful and I wish I could get rid of it and have two rows of what I’ve added myself like it used to be. There is not one release showing that I am interested in or has any relation to my library. They need to give us an option of not having ''New releases for you" showing.

Besides getting better I really think this screen has to provide more information. Just an album title and artiasts name says next to completely nothing in many cases. Give us genre information underneath the albums please, or any other information that gives me any clue what kind of music it is without having to open tens to hundreds of albums. If I look at the recommendations on lastfm for example there is allways a line that tells me they have choosen this album xxxx for me because I also listened to yyyy. That’s usefull information. Now combine something along the line like this with genre tags and than we are finally getting somewhere. 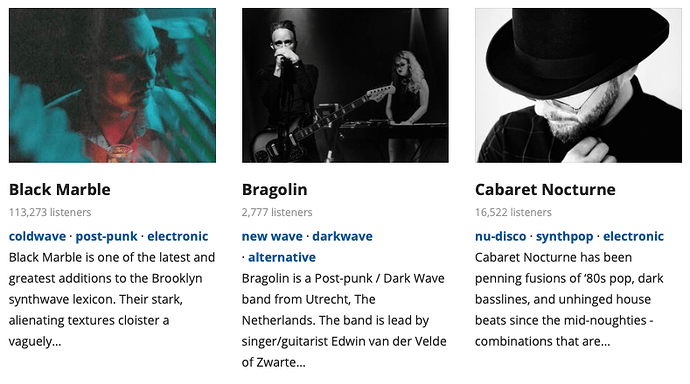 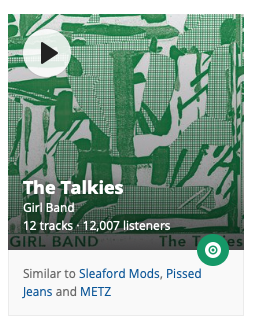 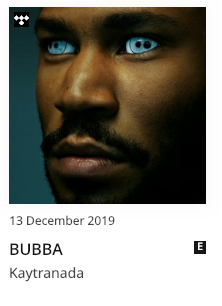 How am I suppose to know who ‘Bubba’ is? (and many other albums, without having to click back and forth constantly) The only clue I get is the album art of which I can make a guess of what to expect. In the lastfm example I do have a clue what to expect from the ‘Talkies’, it also gives me a clue why they (well the algorithm, I know) picked this album for me.

Sorry to be off topic, but wasn’t Roon supposed to be all about metadata. Where is it then?, not in the places where one would expect it to be. You don’t have to copy others but at least some more metadata in the presentation of new releases, my own albums, my library artists is the least we can expect from a software service that goes proud about their metadata deliverance. The “albums” , “artists”, “composers”, “compositions” and “tracks” sections all feel like they are still in beta phase. It all could be so much more. Unfortunatly there has been very little love to these basics of a music player over the last years.

Not sure if the will be of any help, but I have found the closing Roon and reopening it sometimes updates the selections. Still I agree it could use some improvements.

I seem to have been recommended these 2 since the feature debuted. 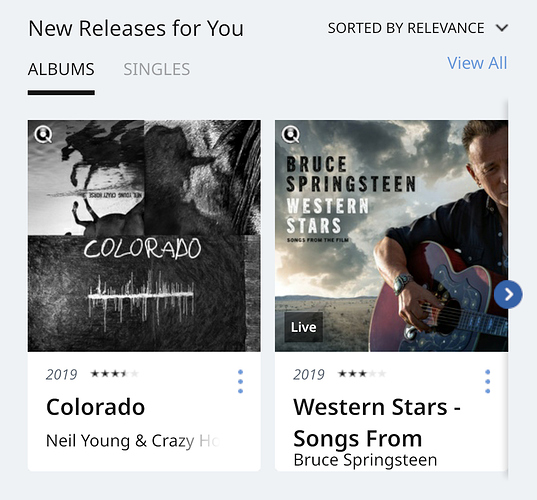 It’s certainly not a useful addition in its current iteration. Presumably tweaks are going on in the background that will improve things.