I know that sometimes it takes a couple of hours before new tidal albums and masters show up in roon, but now it has been more than 24 hours? It showed up in my Lumin app, same time as they were avaible in the tidal app…

Could you give some examples so that other users can see if they’ve got the same problem?

When i push tidal in the roon app and look under both new albums and masters, no new additions since last friday…But searching for an album thats released this friday and roon finds it…Roon always show some of the albums that are released under new and masters, but not this time…

What album(s) are you referring to? I’d like to check if it’s the same here…

It’s the same in my system. You can find the Tidal albums via Roon if you know what you’re looking for, but they don’t show up in “What’s new?” (yet). I can’t tell you if this “lagging behind” can be reduced or not.

Ok, its just not me then…i know Roon is lagging behind sometimes 3 or 4 hours, but now it has been more than 24 hours…but thanks for checking up

I can see them now

If you go to Preferences / Services, and click on your Tidal username, you should see a “Sync Library Now” link in the popup. That usually works for me (on desktop).

This did not work for me - I currently have the issue with the Black Panther album.
It’s pretty frustrating since it’s a very expensive program, and I have to use my browser to listen to new music.

I also tried deleting the cache folder.
Are there any other solutions to this issue?

This one? I don’t know if the album cleared in the hours after your post, but I had no problems adding it in Tidal, and showing up in Roon after a forced synch.

I can see the album in Roon and add it, but all of the tracks are unavailable for me.
I cannot play any of them. 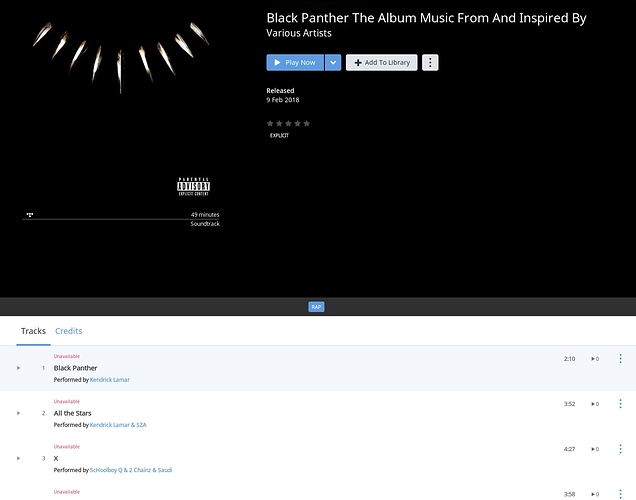 It will become available soon, this also happened with Eminem’s Revival (not so sure in hindsight why I was so desperate to have quick access to that!).

Thank you very much!
Now I at least know that there’s nothing I can do to change that on my end.