Quick, someone get Anthony Tommasini a Roon subscription!

No, I Am Not Getting Rid of My Thousands of CDs

Our chief classical music critic writes in praise of going to a shelf, pulling out a recording and sitting down to listen.

And a copy of dbPoweramp

Nothing beats a physical collection - that’s why it’s called a music collection. Streaming is nice for mobile use and exploring new music as well as making playlists for party etc. - but as a music and musicscene lover I will always only take seriously a real physical collection. I have thousands of LPs and CDs - and whilst I do rip CDs to FLAC and use Roon for digital playback I still keep the CDs and even pull them out of the shelf when streaming the album from my NAS. Been playing tons of vinyl lately though.

My physical collection was ripped a few years ago (6000+CDs) and the discs are stored in boxes in the garage - I do still occasionally buy cds but only really when there is no easy download option (and sometimes the cd is the cheapest option).

I can see the point on an LP collection as, at my age, I can read the LP cover and booklets etc. Then there’s the handling rituals…
But CDs! Packaged in boxes designed by Satan and with inserts I couldn’t read 30 years ago. Give me digital over CDs anytime.

Ain’t worth the paper it’s printed on and that paper is dirt cheap.

I cling to my CDs and SACDs too. But I rip them and put them in storage containers as I don’t need them again unless I need to re-rip them.

The only CDs I have are for albums that can’t be found on streaming.

Are albums that were purchased and downloaded considered part of the collection? What about the highest quality iTunes tracks if they are correctly organized, have most metadata filled in correctly and have digital booklets? I never considered anything lossy as worth collecting but any music I have that is lossless and organized correctly I feel is part of my music collection, or would you not even consider than a collection? Just curious

I cling to CDs and SACDs because the albums I find on Qobuz or Tidal are rarely the best masterings available for said albums. Keep in mind that I don’t listen to Hip Hop, Rap, or current pop music. Most the music I listen to is rock from the 60’s, 70’s, and 80’s along with Classical and Jazz.

I cling to CDs and SACDs because the albums I find on Qobuz or Tidal are rarely the best masterings available for said albums.

This. A thousand times.

I guess I don’t understand your point, Rick.

I don’t even understand why you think you had to make it. Are you saying that the story’s not interesting because he’s dumb enough to work for a paper you don’t respect?

For that matter, why don’t you respect the paper? It got more Pulitzer prizes this year than any other news organization. More over the whole history of the Pulitzer than any other paper. What’s the metric for ‘worth’, here?

It got more Pulitzer prizes this year

And Cuomo got an Emmy… it’s all severely compromised

Gentlemen if I wanted to spend my time watching just about every discussion, no matter how unrelated to it may be to politics, quickly turn into an endless steam of political rants I would be on Facebook. Please no politics!

I continue to buy CDs and SACDs. My wife and I are this moment listening to Harvey Mandel. With her young ears, she feels that it sounded “better than many files”. (Then, again, she is anxiously awaiting our buying a turntable for similar reasons.) We have a dedicated MacMini and dbPoweramp intended to rip our library, but we never seem to want to invest the time. I did not take @ogs comment to be political as much as an expressed disappointment in journalism. I feel that way about equipment reviewers as well; rather sad erosion.

Ain’t worth the paper it’s printed on and that paper is dirt cheap.

Why? Because it doesn’t promote conspiracy theory?

I don’t live in the States, but my understanding is that the NYT is a pretty reliable source of information. Am I wrong?

I subscribe to the New York Times and I read it every day. However, all their technology writers are pearl-clutchers of the highest order. They mostly sound like your crazy uncle at thanksgiving complaining like Monty Burns about new fangled fads like them electric lanterns and whatnot. Get off their lawns, you dumb kids!

You can have Roon and CD’s too! LP’s and box sets are not off-limits either!! 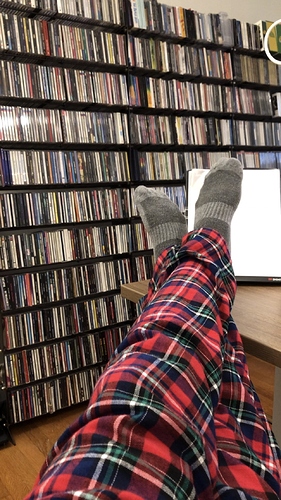 Tommasini is the classical music critic. In that case, Roon probably isn’t going to make him all that happy.