Nothing Earth shattering, but when I stop my Roon service in Debian, I always get and Error: No space left on device message. Doesn’t seem to affect anything but my drives are all read/write and have gobs of space. So it’s a mystery to me. 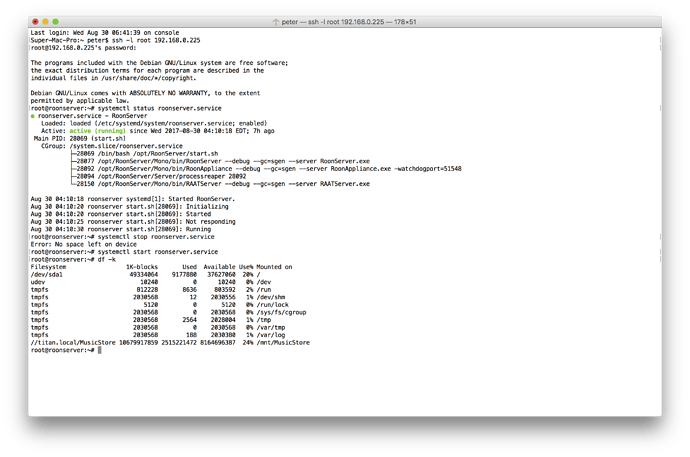 Are you out of Inodes? 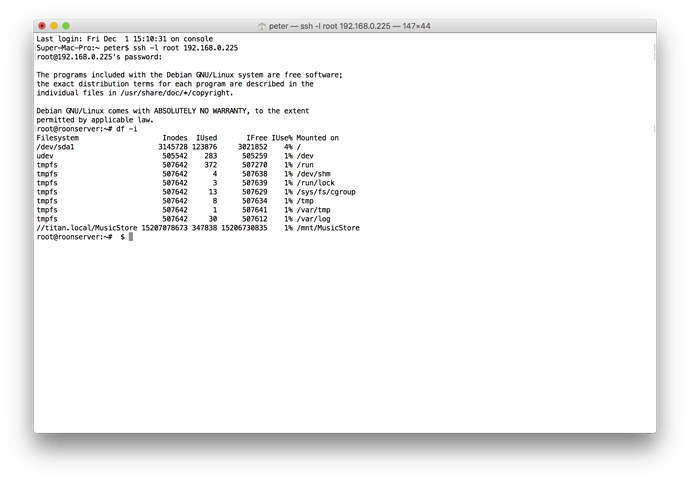 All of those tmpfs mounts are running in RAM. What is the output of free -m while Roon is running?

Based on what I have seen, Roon on Linux uses a lot of cache memory (a good thing). But that can create havoc for RAM based files systems like tmpfs.

Recommendation:
/var/log should not be a tmpfs - that is for persistent storage of daemon logs. I would comment that line out in /etc/fstab
/var/tmp - there are pros and cons for this being tmpfs. Personally, I do not like /var/tmp to be tmpfs. I would comment out that line in the /etc/fstab as well.
All of the other things you have as tmpfs are fine.
After you make those changes, reboot and see if the problem goes away.

I pulled the tmpfs entries and that seems to have done it. Thanks!

also, make sure your inotify watch handles is large… systemd has an issue with this when they run out, and Roon uses a ton for file system watching

try this and then try starting roonserver: sudo echo 1048576 > /proc/sys/fs/inotify/max_user_watches My guess is that you have something installed on the machine which is opening up a bunch of inotify watches and when RoonServer goes to startup it can’t allocate enough. The command above will increase the number of available watches significantly. Do you have some kind of cloud-based storage software installed (crashplan, dropbox, etc)? If the above fixes the problem then you’ll want to add …

I realize this is an ancient thread but it appears to be the only one discussing the error in question. The link to the bug report above was specific to Redhat, but I’ve been getting this error for several months on Mint 19.1. Can anyone point me to current information in order to resolve this?

“Failed to add /run/systemd/ask-password to directory watch: No space left on device”

Results of df -i

Thank you @wklie , the command seems to have done the trick. I’ve edited the appropriate file and I suspect all will be fine when I reboot also.