Noise on the line

And now for a mystery, ladies and gentlemen -

I now have a rushing (static type) noise coming out of my speakers with a beep-beep noise once per second (no roadrunner jokes, please). This is not a “background level” noise, but one that is constant, regardless of the preamplifier’s volume settings (doesn’t get louder as volume is increased).

Signal chain is as follows:

Power connections are as follows:

I’ve satisfied myself that the noise is on the ground plane - not on the signal path. Even with the preamplifier turned off, I get the noise when the power amps and speakers are on.

Because this does seem to be a grounding problem, I think I have to do one of two things:

Are these reasonable troubleshooting steps?

Hi @Glenn_Young - Could a DC blocker be the solution?

DC on the power feed usually causes a mechanical hum at the power supply frequency (50 or 60 Hz) in toroidal transformers, not beeps over the speakers

Run everything through the UPS

Even with the preamplifier turned off, I get the noise when the power amps and speakers are on.

This is probably a silly suggestion, but have you also tried disconnecting the DAC from your preamp (even though it is switched off)? This would, I think, at least completely rule out half your chain?

As said. Rule everything out.
No UPS for the beginning. Do the speakers (bass powered) produce the noise in it’s own? Add the pre amp. Any noise now? Add the DAC (powered by some PS on it’s own). Noise?

I just backed up the HDD to another and will plug that one into the system in lieu of the first. Hoping…

UPSs provide a horrible looking sine wave. Even the “pure sine wave” ones are horrible. This does not do audio products a bit of good. However…

Honestly, with something like this, you need to start unplugging other stuff in your house. Or at least flipping breakers. Did you install anything new recently? Did you see a neighbor put an appliance box out on the curb like a TV once this started?

One other weird question… How does the internet come into your house? Is it DSL? Do you have a “real” phone line? After a lightning storm the ground to the telecom box failed and that caused noise in my electrical. This was many years ago and it was obvious because the phone line was nothing but static.

I had an issue, not as severe, after installing dimmers for LEDs in an older house. I could only hear them when the lights were on though and it was louder based on the number of lights the switch was controlling. But the noise was there as long as the amps were on. Had to put a new house rule in place… if I was listening to music no one was allowed to turn on the lights in the kitchen.

Anyway, something has changed, and we just need to find it. It may not be anything within your audio chain though.

WORST OF ALL POSSIBLE SOLUTIONS!

The noise is coming from the USB ports of my BRAND NEW NUC! Everything on = noise at speakers. Turn off the NUC - noise instantly stops.

The noise is not coming from the USB Library drive - I’ve taken the previous one out & substituted a completely new drive.

The noise is not coming from the UPS - I took it completely out of the system and now everything is plugged into the same power strip / surge suppressor.

The noise is not coming from the USB DAC - I took it completely out of the system and plugged the NUC directly into the digital USB input of my preamp.

The noise is not coming from the USB cables - I replaced every one (twice). I do notice, however, that I can wiggle the USB-A connector in its NUC socket and get static.

I had read that the USB sockets on NUCs were delicate, but this is RIDICULOUS! The NUC insn’t even a month old. I’d use TOSLINK optical instead but the %(*)^&_)^(%^ NUC doesn’t have a TOSLINK out.

The thing DOES have a socket in the rear with a lightning bolt on it, and one on the front that might be a USB-C? If I can find the right cords, maybe I can use one or the other of those? I’m just profoundly disgusted with the NUC. I’ve owned computers for decades and NEVER had another USB socket go bad.

And they ARE bad - now the NUC can’t even see the USB HDD plugged into its rear USB port (either of the USB-A ones). Are ALL NUCs so poorly made?

I’m inclined to just toss the NUC (and ROCK along with it) and go back to a Roon Core install on a Windoze laptop. At least the USB ports work on those…

When I first plugged my Chord Mojo 2 into my Dell laptop for “away-from-home” use, it was very noisy. So, I purchased a RPi4 and installed RoPieeeXL on it. When away from home and using the Dell Roon core, I use WIFI to the RPi4 and USB from the RPi4 to Mojo 2.

I also purchased an HDMI extractor and sometimes using HDMI out from the Dell.

How is the NUC connected to the network? What category of cable?

Does the noise vanish if the NUC is disconnected from the network?

I’m inclined to just toss the NUC (and ROCK along with it) and go back to a Roon Core install on a Windoze laptop. At least the USB ports work on those…

Well, this is the old “separation of concerns” idea. Your ROCK should ideally be isolated from music reproduction. Lots of people use all different versions of not doing this (HDMI, USB outs, some even use the 3.5mm audio jack which i find amazing, but that’s another topic entirely).

As @Jim_F says, if you can get a streamer of some kind involved - Ropieee, Bluenote, or far more fancy, you’re running things “as they’re supposed to be” with music transiting ethernet to a purpose-built device that has no other job other than turning that stream into a USB (or AES, BNC, coax, SPDIF, Toslink - you choose the HAT/streamer) out.

Your ROCK should ideally be isolated from music reproduction.

I can only confirm.
Please have a look at Roonlabs Sound KB article:

To get the best sound quality from Roon, plan for an ethernet cable between your Core and Output components. One way to accomplish this is with a Roon Ready hardware device.

Overview Roon is built from the ground-up to produce extremely high-quality output, however Roon works differently from other software, so you may not be able to drop it into an existing setup and get the same results immediately. Like most things in...

How is the NUC connected to the network? What category of cable?

Does the noise vanish if the NUC is disconnected from the network?

@Glenn_Young in case you use a shielded ethernet cable this could be an explanation. Go for UTP then 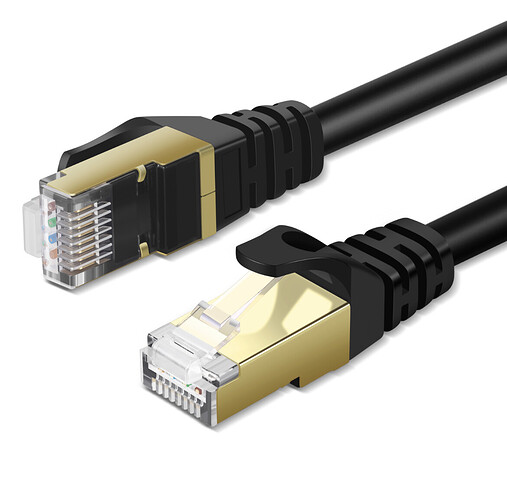 Ahh… I missed you had a DAC connected directly to the NuC. I asumed everyone stopped doing this

Had a friend who recently ran into this problem on a, relatively high-end motherboard with dedicated USB for audio, and the “cheap” solution was TOSLINK to an external DAC for him. Computers are terrible for audio

You could get a true USB-Isolator device as well, like the Intona 7054 I’m using to absolutely silence any crap coming from the PC - highly recommended, although not high-end

If the USB ports are broken on a month old NUC, surely this is cause for a warranty claim?

The noise is coming from the USB ports of my BRAND NEW NUC! Everything on = noise at speakers. Turn off the NUC - noise instantly stops.

Use a USB isolator, examples: UpTone Audio's strengths are in engineering, design and production—not in graphics and marketing.  We take a simple and very open approach to explaining our products and we avoid coining fanciful names for the techniques and technologies we... Once again, Wyred 4 Sound offers a fantastic audio product at an affordable price! Based on the success of the Remedy and known benefits of jitter reduction in a digital signal, we're proud to present the Recovery USB...

(I have used both and they are very good, about the same I would say)

Or better yet a streamer:

Well, I’ve persuaded the NUC to “see” the Library drive through one of the two rear USB-A ports. I’m going to try the USB DAC via the front USB port of the NUC. If it works (without noise), I’m leaving the USB cord plugged in from now on!

The NUC issue is that it HAS no usable output other than HDMI (that my DAC can’t use), Ethernet (must be used with a streamer), or USB (and the ports are physically delicate, apparently). If worse comes to worst, I’ll move the darned NUC back to the computer room again and (at least temporarily) use my Apple TV3 as a streamer. That way NO noise from the drive OR the NUC can get to the audio system (Apple TV3’s audio output is TOSLINK optical).