Hi there, I am a new Roon fan and have been playing with extensively over the past few days. Here is a few suggestions related to the Now Playing screen which I had displayed all night long last Saturday for a big party at home.

First and foremost, this is a fantastic product and we all had a great deal of fun with it. So there it goes.

Agree on most, but “moving the mouse” doesn’t exist on my iPad.

That’s so true… tapping the screen then.

The media gallery is a great feature - sadly not a lot of my library has extra media, and Tidal doesn’t have any. But I’d like to see Roon compile a “virtual booklet” of things like images, credits, lyrics etc and let you swipe through them during playback. They almost have that with the share options - where you compile a graphic to share. And have the media gallery already (a bit like the Kindle overview)… so put them together :). It also means as a user you can be listening and think, “hey, I like the sax, who was that?” Bring up the credits, tap on the name and be able to see related acts. Moves the relationships into the listening experience, rather than before it.

Most of these requests exist in the product today, although not in the exact graphical representation you want.

Now Playing shows the queue. If I want to learn more about the current album, I touch the album picture and look at reviews, pdf, etc. To learn about artists, I touch them, see other albums they play on, maybe add them to the queue, and off we go, navigating the graph.

Agreed. The roon website suggests it exists because LPs had rich media and modern players don’t. I was suggesting getting back to a more sensory experience.

Most features exist in roon in many areas. I largely care about experience (and by extension UI) 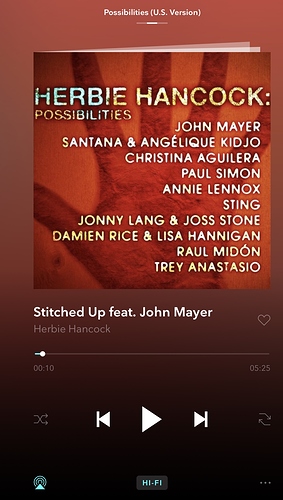 Tried the Tidal app today for the first time, and noticed their playback screen. Like Amazon “Look Inside” the cover invites you to click on it - where it gives you a pretty rubbish link to credits. Roon can do so much more than Tidal, and the roon Share UI is great where you can customise it). Tap the cover, get a “booklet of thumnails” with things like lyrics etc.