I have a laptop running Roon Core at the moment, but looking to go the server route. I will continue to use my laptop as the controller, but I’ve found that when I’m doing some other things on my laptop that it can cause some audio drop outs.

I plan on using Convolution, or at least testing it again Dirac Live, and I may use some of the other DSP options at some point. For no more that the extra will cost me, I may as well grab an i7 and be done with it.

The question is should I run Roon ROCK or Win10 Pro? I’m only going to use it for music at this point, with Roon, but I may later add Plex and do movies as well. I suppose I could always start with ROCK and then later add an O/S that will support both.

It all depends on what you want: do you want a toaster that’s as reliable as a toaster can be, or do you want a non-self cleaning smart oven that’ll allow you to upload recipes from your cellphone, but might crash on you once in a while and also possibly burn your house down ?

So you are suggesting that ROCK is going to be more reliable than Win10Pro.

I’m in trouble… been running multiple machines with Windows for 30+ years in my home, had no idea I was at risk of it burning down. Yikes!

Windows works just fine. Have had my primary core on Windows for over 5 years without an issue. There is no SQ difference between them.

Use what you are comfortable with or want to try out. ROCK, or more correctly, Roon OS, is a variant of Linux built by Roon. It is locked, so no other programs or diagnostics can be loaded or run on to it. It is a “black box”.

If you want to run other software, or even, diagnostics to monitor temperature or other system usage, then another OS is what you need. It can be windows, it could even be another flavor of Linux if you are so inclined. You can always try one and switch. Just remember to back up your database to restore.

So you are suggesting that ROCK is going to be more reliable than Win10Pro.

The idea is for it to be a self-updating appliance. Think of it as your own music serving toaster that you don’t have to worry about. If you feel like updating Windows Pro machines is a good use of your time, knock yourself out

I’m thinking the Roon OS to start with, then if I ever decide to go Plex, I’ll update to something else that can run it.

I’ve got a variety of Windows systems running here at home - desktops, laptops, tablets, an HTPC, and a headless server. Nevertheless, I chose ROCK for my NUC. Simply because I prefer to have a Roon appliance rather than another Windows PC running Roon. Being a low-power appliance, I leave it on 24/7. And I didn’t install the Roon Core on the headless server because I have it sleeping as much as possible - it only wakes up to take backups and to serve media to the HTPC when that is in operation.

And as you say, you can always start with ROCK and then install another OS later if you wish to.

Should I stick with the i7… or is the i5 going to be sufficient if only running ROCK?

Depends on the size of your library (both local content and streamed albums added to your library), the number of simultaneous zones, and the amount of DSP that you envisage using.

Personally, I hedged my bets and went with an i5 (and 8GB RAM - that should be sufficient for most usage scenarios).

If you feel like updating Windows Pro machines is a good

Yes, that is why savvy users go with Enterprise LTSC and don’t have to worry about such things.

AFAIC, it’s a desktop OS vs something dedicated thing, in the sense that if you’re bothering to run a dedicated machine, and especially one that’s supported by ROCK, you might as well go the whole way. Computers have gotten cheap enough that this is a viable approach, and one that feels to me like it’d be less of a hassle. The same applies to Plex, in the sense that an nVidia shield is probably a better Plex device than a NUC running Windows and a bunch of apps is, and if you just need a Plex player, I’d say the same of a Vero 4k. Then again, and in large part because that’s the way I’ve done things for the past 15 years or so, I use the Thor’s hammer approach converged appliance server, so, well…

Happens a lot around here

Core Machine (Operating system/System info/Roon build number) My Core is loaded on my Dell PC 16Gig Memory, Windows 10 Pro. IBM had an update yesterday 1013/2020. Since then my Roon won’t start. l get the quote screen and then the loading icon that doesn’t change. Roon usually starts quickly. I have a lifetime license. I shutdown the pc and restarted several times with no joy. I’ve had Roon for about a year with no issues until today. I connect to my equipment through USB to a Wyred4Soun…

If you are planning to run DSP and have a large library, a NUC with an i7 may not be enough horsepower. I have the NUC you are considering (with 16gb RAM “just in case”) and about 5.5tb of music. Running DSD256 all the time, the 3.4x rate shown below is the BEST I can do, usually being closer to 3x. As others who don’t use DSP claim they get multiples of that running i3’s or Mac Minis with 4gb RAM, the DSP usage seems to be the big variable. 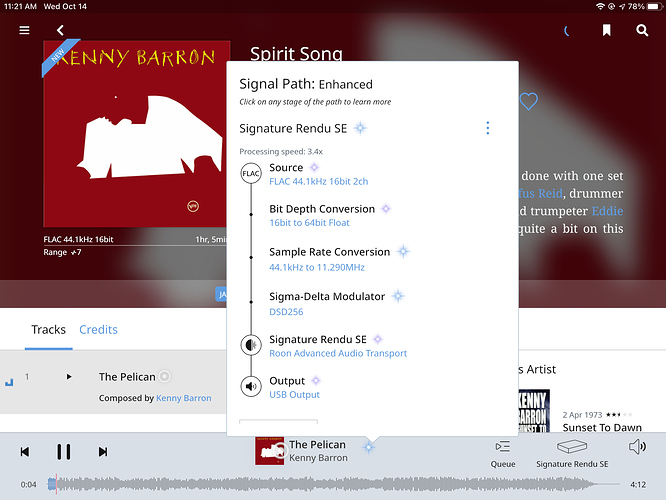 Yes, DSP can add a lot of processing requirements, especially DSD. However, 3.4x is just fine. You need to be dipping under 2x for processing issues to start (I think it is more like 1.3ish actually, but, I’d keep an eye on it if it goes below 2x).

FYI, here is what processing speed means as quoted from the Roon FAQ on DSP (https://kb.roonlabs.com/DSP_Engine)

this reflects the load relative to consuming a full core. “2.0x” means you’re using 50% of one CPU core to play music in this zone.

To confirm, I’m getting a 500GB Thunderbolt Samsung S7 for the storage, and I’m only at about 100GB with my library, so I have a long way to go. I don’t do DSD much… it will mainly be Convolution.

I’ve run my core on an older (circa 2011) i7 laptop with windows, a QNAP NAS and NUC/Rock. The NAS was the worst, by far, Windows and Rock about the same. After multiple attempts to consolidate things and countless hours wasted I’ve come to the conclusion for my situation that dedicated devices for dedicated purposes works best. YMMV. I’v got:

I’m super happy with NUC/Rock. I’ve got multiple computers in the house, why have all that windows baggage if you are only going to run Roon? If multi-use I’d surely go Windows if needed.

To confirm, I’m getting a 500GB Thunderbolt Samsung S7 for the storage

ROCK does not have the drivers for thunderbolt, so you would need to use Windows for that. I’ve always use Western Digital Passports.

it will mainly be Convolution.

Convolution can easily be a processor hog. Moreso than DSD depending.

Bit late but my 2p

It depends what you intend to use it for . Personally I run a server for Roon (Audio) , JRiver (Video , some audio) and MS SQL Server (bit of dev dabbling , cant quite let go) . So for me Windows as it retains the flexibility to run anything.

ROCK my be fine , I have no experience, but it simply Roon Only . You can as you say go ROCK to start with then switch to Windows later but why? Yes your library backup/restore is said to be OS agnostic but you could leave yourself a load of work tidying up after an OS switch .

Admittedly biased , I have used Windows since 3.1and am a Microsoft certified developer so I have a vested interest.

I suspect my next PC will be a NUC running Windows