I dont need/want a dongle

I believe that a USB dongle is the only way to get WiFi to work in ROCK.
There are no other options at this moment in time.

See the response by @danny here.

The Nucleus is a completely different device. The passive aftermarket case probably crippled the standard wifi card/ antenna. So this is something different. Aside from the fact that a Nucleus is a seventh gen NUC

Please let someone who understands the question answer this.

I have a simple request, and its in the topic

The Nucleus is a completely different device.

Nucleus and ROCK are not that different. See here.

Wim please stop answering.
Nucleus is a Nuc7 passive with different components
Nuc8 is the latest gen, and i am talking about active .

They are running almost the same OS. See the link above.

Well here is another answer that you won’t like, so I will say it once and then stop.

I understand that you can’t install these drivers if you are running ROCK on a NUC8.

If you want to use WiFi on a ROCK, then as stated above, it seems that you need to use a dongle. If you want to use the built-in WiFi on your Roon NUC8 then you will need to install Windows 10 or install a Linux Server such as Ubuntu on a NUC8, then install Roon.

I will be more than happy to be wrong on this…

@Edmund_Comber I couldn’t have said it better.

Was it ever promised that ROCK should support built-in WiFi? I don’t think I’ve read that.

Nuc8 is currently not officially supported (anymore, but well).

The case is irrelevant to the model: RoonLabs distributes the OS they use for their device, and therefore allow users to DIY it. This implies dealing with the limitations of their device, not them supporting everything and the kitchen sink on the NUC. Part of the design choice is to not allow you to add drivers: only RoonLabs can.

If you think wifi should be supported on NUC8, make a feature request.

@seagull was giving you, and everyone else who might look for wifi on ROCK on NuC8 correct information. Just because you don’t like it doesn’t make it wrong, and a bit of gratitude for taking the time to help you out would probably be more adequate as a response than asking him to STFU.

NUC 8 was officially supported, and supporting only 1 wifi implementation by intel, for which the correct driver is already officially supplied by Intel is very easy. 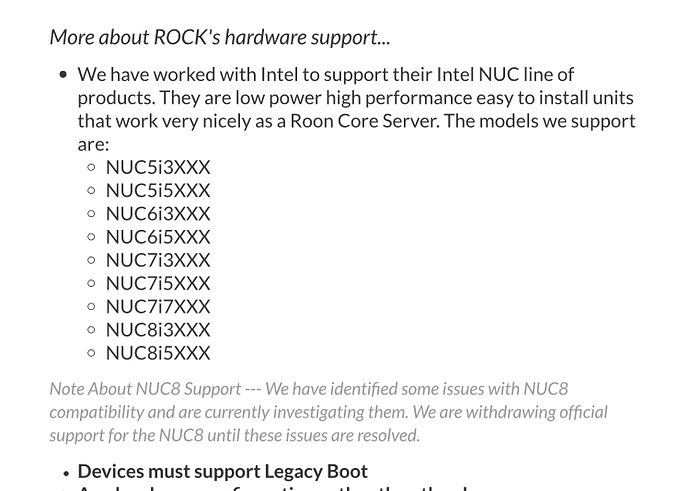 So the only question is how do I get the official driver by intel in ROON.

If ROON is not planning to support the NUC 8, than there is no future hardware platform for ROON.

Yeah, we get the question, and you’ve been provided with an answer. You’re venting at the wrong crowd. If you want to take this further, may I suggest you contact @danny directly.

I loaded ROON Rock on Intel NUC’s for many friends who need some help with it.
(previously on NUC7)

Now I use different NUC8 models ( i3 / i5) most are actively/standard cooled because people can easily put the server somewhere outside there listening room.

I see Intel officially released the Linux drivers for the Intel® Wireless-AC 9560 + Bluetooth 5.0 which is in all NUC8 kits

Can you let me know whether you plan to integrate this in the ROON ROCK package?

Or is there an easy way to do this ourselves like with the mp3 CODECS.

I see a networking folder when I look at the SMB

You just don’t seem to get it do you?

ROCK is a closed environment OS designed to deliver one task - provide a foolproof installation and simple configuration to deliver a standard and consistent Roon experience. It is appliance software to deliver a Roon Appliance on a range on Intel NUCs.

If users can add or change drivers, then it is no longer the simple, consistent eco system that it is designed to be, and if tinkering is allowed then it brings with it all sorts of support issues I expect Roon Labs could do without.

In terms of WiFi support NUC8 is no different to NUC7 which also has WiFi and Bluetooth, which in hardware has earlier versions providing Intel Dual Band Wireless-AC 8265 and Bluetooth 4.2.

It is perfectly acceptable to make a Feature Request for ROCK to support WiFi in future and then await an answer if it comes, but to keep on repeating that the drivers are available and demanding to be told how to install them on ROCK is inappropriate.

If ROON is not planning to support the NUC 8, than there is no future hardware platform for ROON.

This is not the case, and rest assured many of us believe that there is a very bright future for ROCK. If you want to install Roon on a NUC8 you can (I am running ROCK on a NUC8i7 quite happily), and if you must have WiFi on your Roon server, you have been given pointers on how to do it.

Edmund, Like some others, you probably don’t seem to get it.

If Roon Labs did not give some guidance, roadmap information about the hardware platform, a lifetime license of 500 euro would not make sense.

With regard to my question READ THE FAQ

( And I am pretty experienced with different setups, and I have been building Roon Rock many times)

but once again, we recommend using ethernet.

You should really use ethernet as you have highlighted yourself.

Oh no I do indeed “get it”. I read and understood the FAQ before i put my ROCK environment together, and asked on this forum if my proposed hardware configuration was OK to double check my understanding of the FAQs and at the time my NUC8i7 was supported, and I had no troubles getting it working. Others were not so lucky and support for NUC8 was withdrawn pending a solution.

What you are demanding is that somebody tells you how to install the Intel Linux WiFi drivers into ROCK. The provision to modify, tinker with or add/replace drivers in ROCK has never been provided as far as I am aware.

Anyway, I wish you good luck, this will be my last comment on this topic.

ROCK is a locked down OS and cannot be modified in any way by the end user. For ROCK to have the new Intel WiFi drivers, Roon will need to integrate them into the ROCK build. The only ones who can answer when or if that will happen is Roon themselves; and they have already ready been notified earlier in the thread. So be patient until they can respond.

Imho, I doubt that they will patch in the drivers and put it through testing in any short time frame. So, if you need to get this build done “now”, then I would suggest a Linux build like Ubuntu where you can load the drivers yourself.

The Nucleus OS is different that the ROCK OS. There are features in Nucleus that do not exist in ROCK. Also, the lack of WiFi was a choice made by Roon when designing the Nucleus, not as a side effect of the case or other engineering limitation.
Please read the Nucleus white paper for more information : https://docs.google.com/document/d/1pUj-yFsAHPgTuV1TbcESA4va1_mxv1M_VQPJV___nuQ/edit#.

I’m not adding WiFi support past what’s already there, as we do not want anyone to use it and then come to us with issues. You can work around it using a bridge, but at least then you will know you did something bad if it doesn’t perform.

The only other issue is this issue of the BIOS showing no legacy boot, or not having it uncheckable. Many have not at this issue and those who have have silently gone away and failed to produce forensics that would help us determine why (screenshots, videos, serial numbers, intel support conversation logs, etc…).

I’m willing to ignore the BIOS “legacy vs UEFI boot” issue until we have further real evidence it is real, and the WiFi support is not being added. I’m unaware of any other issues at hand with the NUC8iXBE line, so my recommendation is to have @mike put it back on the supported list, with the caveat that WiFi only works on the older NUCs.

If any other issues are found, let us know by opening another topic and telling us what’s wrong.

my recommendation is to have @mike put it back on the supported list, with the caveat that WiFi only works on the older NUCs.