I also have a Nucleus+ with 2 TB SSD internal drive (formatted ok) and want to connect a USB CD drive to rip directly to the internal drive in Nucleus. I connected the drive, but nothing happened. Not sure what else I need to do. Help?

I am also unsure of what “setup” I need to do within Roon before I start.

((removed incorrect information)) Remember, if you want to get that rip out of Roon WITH all the metadata, you will need to export it.

An Apple CD/DVD is know not to work I believe. what drive are you using and does it show up in the web GUI?

An Apple CD/DVD is know not to work I believe.

Support for an Apple Superdrive was included in November 2019.

Once you connect the drive, you need to go to the Nucleus WebUI and initiate the rip there.

Er, no, you don’t need to do this. Just putting the disc in the drive should initiate the operation.

Overview Starting with Roon OS Build 175, CD audio extraction support is included: Roon OS will "rip" CDs. This support is meant to be as hands-off as possible. Obviously, you will need to physically load and unload CDs, but not much else in terms of...

Export? Not sure what you mean, could you explain?

I’m not sure how to start the rip from the UI either. Here is a picture of what I get when I go to the UI. I don’t find anything that lets me start a rip. 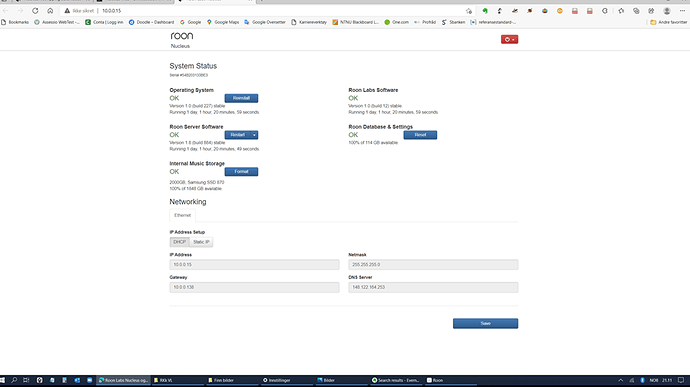 I wonder whether you’ve been bitten by a known bug. Try disconnecting the drive, reboot the Nucleus and then reconnect the drive again. If the bug is cleared, then putting a CD in the drive will start the ripping process automatically. The bug may return after ripping a few CDs, in which case you’ll need to follow the steps above again.

For info, here’s info on the bug (which is being worked on):

This is a known issue, and has been known to Roon Labs since at least last September (and there’s a ticket in to fix it, I believe). The issue lies in the Roon OS, not the Roon software itself. So it shows itself on the Nucleus/Nucleus+ models and NUCs running ROCK. Three things appear to be associated with the issue when it occurs: The CD Ripper stops working The Web Administration page stops working properly, e.g. the Eject button no longer works and a Reboot says that the system has succes…

It was the USB cable, ugh. When I replaced the cable between the Nucleus and the external drive, the ripping happeded automatically as it should and the ripping status showed up on the webbase UI.
So yes, ripping does happen automatically now and it works as I would want it to using FLAC format etc…