Numerous versions of the same album, is this new?

I’m coming across a myriad of artists that have duplicate, triplicate and even quadruplicate listing for the one album, sometimes they are different versions but other times they don’t seem to be. 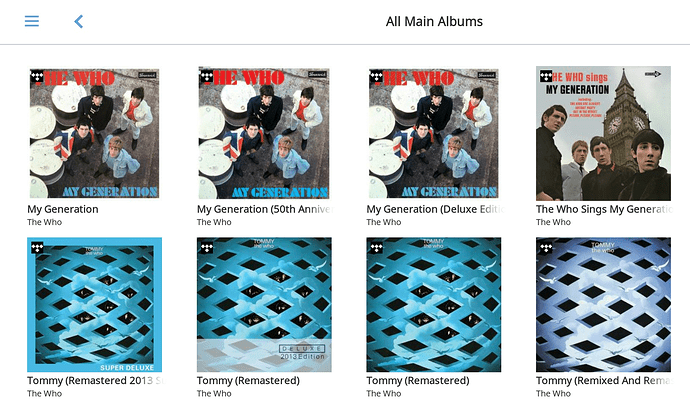 Is this a new phenomenon as I never remember seeing Tidal lists like this in Roon?

We changed this 4-6 weeks ago. You should be seeing exactly what is available in the TIDAL app for your region. Yes, sometimes there are real duplicates, but most of the time you can see the differences in the album titles (as your screen shot shows) and/or with the explicit icon. This is all TIDAL, but was never exposed by Roon before.

Thanks @joel, nice to know I’m not losing it!

The same review is present for the 3 Tidal My Generation albums which actually does seem to be of any of them ( but is most like the 2 CD deluxe version).

Is this likely to be improved in 1.3?

Is this likely to be improved in 1.3?

We might be able to do better here in the future (after 1.3) but there are a lot cases to consider, beyond the recently exposed editions from TIDAL.

Where possible, we are preserving edition-specific information from TIDAL, such as album titles and cover art. But, as mentioned in our recent update about “Better Album Reviews”, our most recent design decisions have focused on reviews that describe the original release and its musical content, as opposed to reviews that focus on a particular release or remastering.

If edition-specific reviews are important, definitely open a feature request so we can monitor interest. Thanks @Sloop_John_B!

I suppose if I had to choose one review it would be the original album. (In the Who case here it’s the deluxe the review is of)

for me my 1.3 my original requests hold sway:

I didn’t do very well in 1.2, do here’s hoping 1.3 will give - 1: No white on black text in “Light Theme” 2: Make Radio algorithm (much ) better, it really is not fully fit for purpose at the moment. 3: Improve sound normalisation process. It does not work as well as dbpoweramp replay gain tags through SBT or asset as a DNLA source. SJB