Compromise; First in the line for a song is a play button that would work as a play button in Tidal/Spotify/iTunes etc. and would play the current album/playlist from there on. Clicking on the name of the song (and it’s area) would work as Roon works now. Everybody happy?

No, not happy. Everything what is able to kill the current queue by accient is real bad in my opinion.
This did happen to me in my previous player and I like Roon for that I (or one of my guests) never have killed a queue by accident since I use Roon.
Thanks Roon for the current play button behaviour!

Maybe there should be some logic that says if there is nothing playing then play immediately, but if something is already playing the give the play now/add to queue/playnext panel.

I believe that type of logic is already there in that when nothing is playing the options presented are reduced: 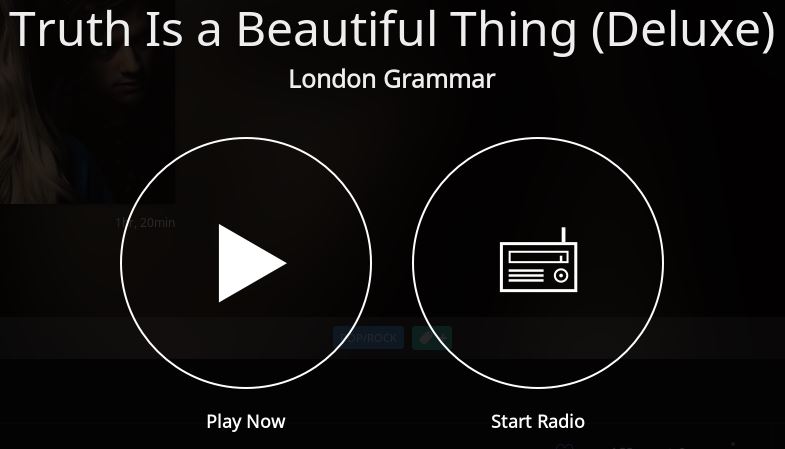 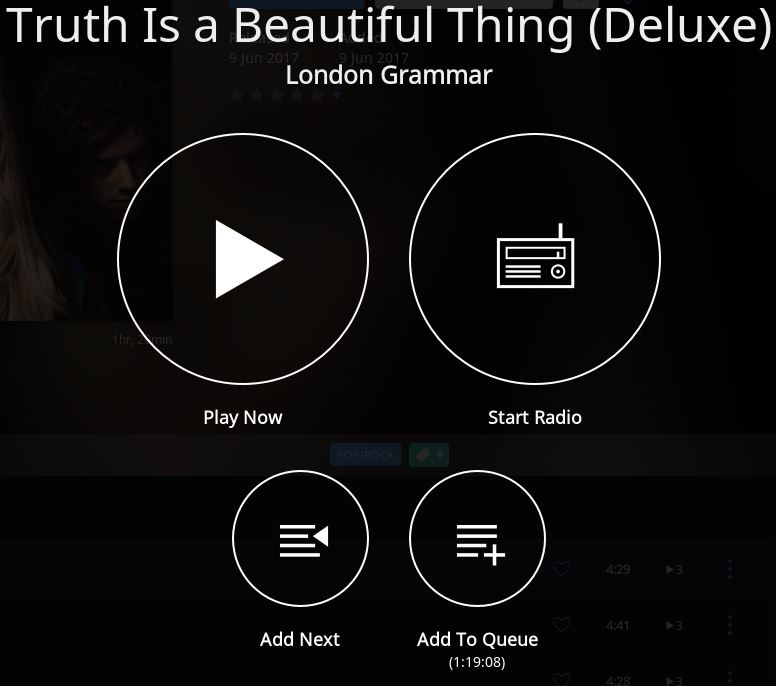 If the “Start Radio” option was moved elsewhere then what your proposing could work.
Maybe “Start Radio” could be offered up as on option when an album or track is selected (right click / long press).
Then when there is nothing playing it could be a one-click play.

There’s no right or wrong here - its just preferences - and clearly from this topic lots of people prefer different control methods.

I’ve used Roon almost exclusively for over a year and have come to love it overall - but I’ve never got used to the pawmasher or default play options. I live with them rather than enjoy them.

If I’m not already playing something, and if I don’t use Roon radio (and I don’t) then when I press play it makes no sense for something to popup and ask if I want to play it. When there’s something already in the queue then thats different, and i can see the value in the pawmasher, although i’d still prefer options for more direct default behaviour. And I personally do like to be able to play from the album view directly, without long holds and then going to the top of the screen to press play in a UI that seems out of place to the other play mechanisms. I was forced to use the Tidal application for a while due to work, and while there;s a lot i didn’t like about it, I found playing albums so much quicker and more direct - just hover over and click and it plays - easy. Jumping back to Roon everything felt a bit long-winded in that sense.

Having a few options to how Roon functions when pressing play would fundamentally keep most users happy and to be honest would be pretty trivial to implement.

Its a small detail admittedly, but its the one of the most used functions so if its not to your liking its a bit annoying. I also find I have to explain how it works to people new to Roon, which tells me its not entirely intuitive.

I understand the control came from Sooloos which I never used personally and I’m guessing nor did the majority of Roon’s current user base, so i don’t think its necessary to cling onto all aspects of that interface if enough people would prefer different options.

People who like things how they are now would be unaffected by any changes as I see them, so I genuinely fail to understand why there’s any protest from those users - things wouldn’t change for them.

It’s all about keeping everyone happy. And that’s never a bad thing as long as its done right - which of course it would be.

It’s all about keeping everyone happy. And that’s never a bad thing as long as its done right - which of course it would be.

Exactly…and for many of us everyone also means the others in the household especially wives who always have their own set of demands especially when it comes to having to deal with tech.

There’s no right or wrong here - its just preferences

Dear Roon team please include a feature, which can be enabled in SETTINGS to enable “One” Click Play or “Normal” Play.

I PREFER normal play (no change) and I HATE One click, but there are folks who like it opposite.

I’ve used Roon almost exclusively for over a year and have come to love it overall - but I’ve never got used to the pawmasher or default play options. I live with them rather than enjoy them.

I suspect this is the majority of users. I know from a lot of experience that people can (and will) get used to anything if the value is high enough.

Roon should run a poll on this site - I predict they would be surprised by the results.

I suspect this is the majority of users

I suspect this is not the case, just added for balance

Personally I’m pro choice … providing it does not detract from the clean UI or compromise functionality (current or planned).

I am new to Roon, but there is no chance I am going to add 1.644.444 clicks to my life because of this incredible lack of UX knowledge and deafness to such a basic request. I can add a few other basics that are missing here too, but it seems there is no listening ear here.

If you really HATE this feature, just leave Roon, like I will. I don’t particularly like the design of Audirvana (and i Love the design in Roon), but it does all the basics just right (and some more for power users ;-). For a fraction of the price.

@Not_Roon > incredible how many times you read “I HATE THIS” from FANS of your product. People are really trying to say something here and it is not a big issue to solve at all.

I wish the UX would start to match the excellent UI. Now it is just a Delorean, the unique car from Back to the Future: beautiful design, but a nightmare to drive.

I will check in in about a year to see what has changed, until then!

This is not the point nor the topic of this thread. Nobody is saying you will be lossing queues. It is easy to implement direct play OR keep your queues.

Direct play should be at least an option/setting, many people would love it and almost all people new to ROON, are used to it from all other audio devices in their life. And for the avoidance of doubt: they are NOT getting used to it all.

I think the phrase is silent majority.

I LOVE the way Roon handles the push of the play button.

If it is ever changed please leave the current as the default option.

If people honestly leave Roon over this, I fear their problems run deeper than those that software developers can influence.

Yes please lets have a poll, I would love to know how few people are bothered by this.

A poll was discussed here in Roons other controversial feature of horizontal scrolling. Which has been strangely quiet of late.

I’m not inclined to close the thread, there may be other users who want to express an opinion. There’s not a lot to be gained from running a vote. Roon is not a democracy and the numbers in this thread can be counted without a vote. I haven’t had any discussion with the devs regarding this thread but, like all active feature request threads, would be confident that they are aware of it. Ultimately they will decide whether user demand warrants incurring the overheads well described by MattF abov…

I created a poll here:

But the choices are pretty bad.
“Add a button”, possibly as an option - do you mean another button next to the current one, or change the meaning of the current one?
The devil is in the details here.

Control click, long press, these are terrible. (I hate the long press on the device, slows down the flow and no discoverability, would prefer to get rid of it.)

In spite of all this debate, I don’t think very many people are dogmatic. A good solution could be ok. So what is a good solution?

But the choices are pretty bad.

Yes it’s a shame it weren’t simpler as I posted in the poll topic, something like:

But since that’s the poll we have it at least will give some indication of numbers that are interested in the feature on way or the other.

For me it’s global, set at the core, like most other top level preferences. Set different per zone would lead to a crazy experience in my opinion.

Control click, long press, these are terrible. (I hate the long press on the device, slows down the flow and no discoverability, would prefer to get rid of it.)

Yes, agreed. Slow, and not obvious to find for unfamiliar users.