One line Work & Part tags to be separated

I asked this as a question over in the Metadata support, but I’d like to include it here as an enhancement to what is already a pretty excellent feature…

I gather that Roon doesn’t separate Work & Part tags when they exist only on one line.

Just now I wanted to separate the heading of a Steve Hackett track “Live Acoustic Set” from the names of the pieces in the medley, as that is how it’s written on the CD sleeve. The medley is all one track, but the heading is separate & I’d love to see it that way in Roon.

It strikes me that there are a number of places one could use this functionality, whether it’s Genesis’ Supper’s Ready followed by the constituent parts or Rush’s La Villa Strangiato, when the parts are generally not separated on the CD.

Or any Classical piece like Sibelius’ 7th which is in one movement, but that movement is broken up into several parts.

For me, it would be very odd to have a set of Sibelius symphonies where all of them have the title on one line & the movements on the lines below it except for just one! That would stick out like a sore thumb & can’t see any good reason for it. It’s still titled “Symphony No.7” & the parts of that symphony, although all on one line, are still the movements, just like all the others.

“Proper” classical music aside, here’s a perfect example of an album that would benefit from work/part tagging to include one line entries: 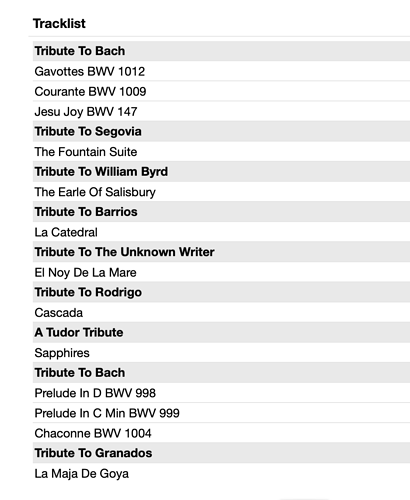 Another album that’s spoiled by this restriction: 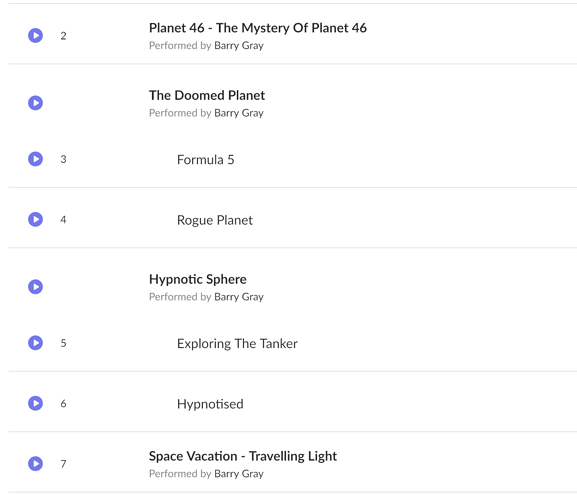 It would be great if the episode titles for those episodes with only one entry were still split to maintain the hierarchy.