Born in October 1965 the first Bowie I can remember is Sound and Vision - every time I hear it I’m transported back to a place in time in my parent’s house. But I had a friend with an older brother so in 78 and 79 I was buying Hunky Dory and Ziggy.
Bought Lodger for £1.99 and then of course Major Tom returned.

I’ve just been listening to this 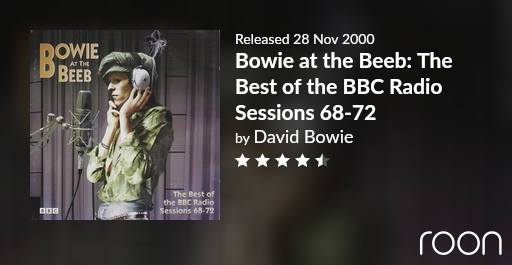 And it’s brought home to me how important David has been during my life without ever having that huge emotional impact of a Dylan, Lennon, Mitchell or Cohen.

tactful cacti by windows making me remember a boy that’s been in such a perfect song but is too fast to take the test of seeing how others may see the faker.

I’m sure some of you probably saw Ziggy on stage and have lived a life with David fascinating you with strange fascinations ?

A thread to trace your Bowie time………

There’s some great stuff on this comp @Sloop_John_B! I had a physical copy of the 3 disc version once upon a time. I’ve no idea where it walked off to.

Indeed, really love the version of always crashing in the same car on the live CD3.

Lucky enough to have seen him live twice in 1997 and 2003. The 1997 gig was in the (relatively) small venue the Olympia Theatre in Dublin and was quite a gig, we were in the gods so the view wasn’t the best but I still have a vivid memory of the intro to Stay (Station to Station is probably my favourite Bowie album) and thinking I’m in the presence of a genius still near the height of his powers. Whereas my memory of the 2003 gig in the much bigger Point Depot is more of a showbiz concert and not as “cutting edge”. That gig was recorded and is on TV over Christmas so I must look at it to see if my memory is affected by something else that may have been going on for me at the time as many others refer to it as a great gig.

I was rather hoping this thread would elicit posts about Bowie and his intersection with our lives either via live gigs or albums.

Definitely! I still have my 12” copies, the music you listened to as a kid stays with you life long.

My brother handed me a well played Ziggy LP and that was that…I was hooked.

In my senior year of high school I had the great fortune to see David Bowie and the Ziggy Stardust Tour at Radio City Music Hall in NYC. Yes indeed the famous Valentine’s Day concert where Bowie “killed” Ziggy Stardust, at least for Americans. Next February will be the 50th anniversary of the concert so please forgive me if my memory of this historic event is quite a bit foggy. I do remember Bowie’s many costume changes and Bowie collapsing at the end of show, which I guess was his way of killing Ziggy.
I never went to another Bowie concert since he always seemed to be playing at some arena and I really hated (and still hate) going to a sports venue to see a concert.