OPERA MUSIC is a demanding style for Roon.

It could make Roon a FANTASTIC tool for enjoying and exploring this rich musical genre.
Amateurs of Opera in Roon, please show you support for implementing this and other suggestions of improvements - and thanks Roon guys for looking at how this could be done !

Or is there anyone else also listening to Opera music in Roon ?

Well, for the sake of support, will leave the comment, but truth be told I mostly watch them (Yeah, I know-I know) from Met Opera recordings and use Plex for that purposes.

No problem. Watching-listening and only listening are not incompatible of course. I am well aware of the special confinement period with the Met broadcasting free, but I do not know Plex. I will inquire.
My short (provocative) self-comment express my astonishment that perceiving this Libretto point as a major one (plus keeping the structure of operas in full order when ripping CDs), I would have bet that I am not by far the only one being frustrated about it. I still hope to collect other person’s opinion on the currently weak collusion (not collision) between Roon and Opera music.
Thanks for the tip,
CD

Well, as far as I can tel that you can reorder things the way you want in your own library with Roon. I’ve recently converted one of the channels from INXS live baby live remastered from LPCM to uncompressed WAV and manually entered all the info.

Also Roon allows you to add volumes (or disks) to the single Album, so I’m not one hundred percent sure what specifically is your issue, screenshot might be useful, cause I have Emil Gilels full 50CD collection ripped and it shows as a single album yet shows volume.

Plex is like Roon for Video library. It also allow stream on the go from your home server and way cheaper than Roon but it’s a different tool for sure

In terms of libretto I highly doubt it’s doable.
Roon uses (most likely I’m just assuming) some public library when it come to the lyrics.
Opera and Symphonic music is such a niche and so freaking old school. I mean, it took me 2 days to find Three tenors from 1994, and it was a huge show back to the days. Obviously dvd quality, sounds like crap, what you gonna do with that 🤷🏻

I listen limited amount opera, I used the Lockdown to revisit the Ring (Solti of course)

There are on line sites for Libretti ,I used for example

to “sing along with”

I am not sure of the copyright legality but you could copy , paste to Word and then “Print to PDF” and include that file in the Opera folder.

Roon will attach this as a PDF much like a Booklet. I use this occasionally for odd extra reviews.

In terms of Box Sets , Complete Opera’s versus odd extracts, Overtures etc , there are already many feature request going way back , I wouldn’t hold your breath

Sorry if I am teaching egg sucking

putting each “CD” into its own folder and naming CD01 , CD02 then make Album Name the same in each “Emil Giles Top 100”

Roon will bulk the album with 50 hyperlinks , not brilliant but better than “one CD”

The other way is to do it similarly for folders and name each folder “CD01 - Beethoven Piano Sonata Op.2” etc. You could renumber all discs to disc 1 , or use the Edit>Fix Track Groupings on each disc

Roon will import 50 individual albums , which may or may not ID if they are previous actual releases if they don’T ID simply merge them back to the 50 CD set

Non of it is ideal , a good solution for boxes is a sad omission. I maintain my really big boxes (Mozart 255 etc) in JRiver where I can define behaviour.

I already think that Roon is the choice for opera lovers - as you can readily access the PDF through the Roon interface. I don’t know whether this is a feature of other music softwares (it certainly was not a feature of iTunes!)

Notwithstanding that it would be nice to have the libretto displayed. Hyperion records manage this with many of their lieder releases.

The multiple disc issue is one that that goes beyond opera - I tend to have less problems with operas in this respect that with other musical genres.

I agree in the worst case an opera may span 5 discs and you do tend to start at the beginning and wok through , its not like a 114 disc set !

I can’t say that I have had any problems importing complete opera sets into Roon, but I do have a workflow when ripping which I think helps:-

This makes sure that all the files are ripped into one folder, and they’re all brought in in the right order. I haven’t had any significant issued with Roon identifying recordings or mis-ordering tracks when they’ve been ripped and imported this way. Roon’s handling of opera has actually got much cleverer of late, with sets nicely divided into acts so you can play an individual act or the whole work (nice when you want to enforce intervals without scrambling for the pause button). 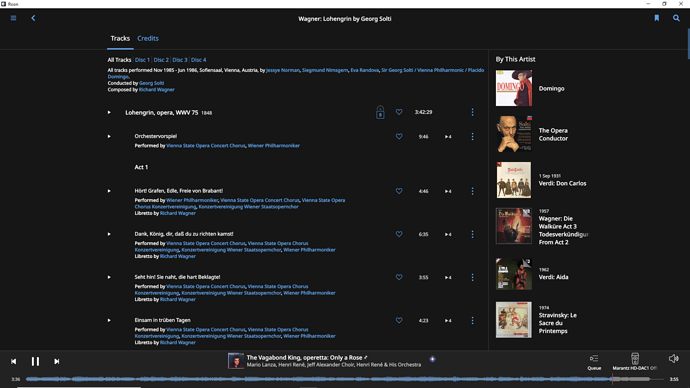 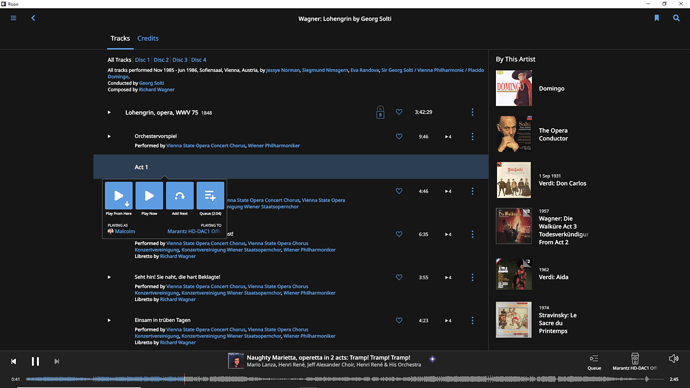 Adding one act at a time to a playlist - just brilliant!

Why, as I’ve said above I have no trouble with dividing in a volume sections. All disks are already in subfolders and I don’t have any issues. The only reason I’ve posted the screen shot to show that the same could be done manually with opera

Thanks all for this good advice on how to make the opera CD sets more digestible by the Roon library structure. I will experiment with it.

About the librettos thanks also for the tricks proposed and the site. I remain convinced that having the possibility to adapt the Karaoke mode for operas would be great ! My immersion into that musical style is relatively new (perhaps as it is also demanding on audio reproduction side), and I see a real added value into having a dual language ribbon while listening. That would really help making the libretto and the drama easy to follow. I believe it would make it all so much more accessible. Even more so when one has not seen any representation of a given piece.

Actually I don’t know how the syncing of the Karaoke text to music stream is implemented by Roon but the problem to solve for doing so for opera librettos has the same exact features as it seems, so what would make it so difficult technically if it already works for other genres ?

I saw the comments about Opera being a “niche and so freaking old school”. Given how much marketing and consumerism has gone into the bulk of music industry in the last half-century it sounds almost as a compliment ! I would add the following, although the aim of this thread is technical and is not to become a tribune for opera music:

In any case, thanks for all constructive comments and welcome to even more!

Very fine suggestions. On top of that, could Roon please make a difference between a single piece of an opera (or any other classical music) and the complete thing?
If I search Cosi fan tutte, Roon-Qobuz shows 1066 different items. But most of them are just a couple of minutes long.
it would nice to have the possibility to choose between the complete work or just excerpts.

Excellent remark indeed ! There is an issue with the interaction with Qobuz there !
I guess what happens is that the indexing of operas has more levels than most other types of music (typically acts I,II,… and scenes with numbers like 6a, 6b). While CDs have a limited duration and cut in either tracks only or in tracks and indexes. Plus the mentions of specific artists in specific scenes, that can confuse sorting based on artists.

However in 2020, even without using ML, it should not be so difficult to map from whatever ripped media or stream from Internet, into a completely correct Roon structure! Could that be done please ? It would save so much hurdle for so many music lovers…

This is a long standing feature request

It would be nice if Opera was recognised as a genre in Roon.

I know that Roon sources its genre classifications from somewhere else but there must be a way of adding one more - particularly when it actually is a genre. There seem to be 25 classifications of Hip Hop and R&B and yet the genre which preceded them by centuries does not even have its existence recognised.

Completely agreed. I rarely look at Roon’s genres but your comment is 100% relevant, another valid request!

Yes, I have heaps of operas processed by ROON. And yes, the sequence of disks (and not only opera) can be wrong but a bit of editing soon fixes that.

As for librettos, do a Google search and most can be found, copied into WORD, translated to pdf and then added in to file explorer to be opened up in ROON . That said I do find a DVD with subtitles a much better format for opera enjoyment, but having the audio only on ROON is nice to access at times.