I m looking for advice to get the best from roon with my current system. I’m a little confused not being a strong network guy how to setup my system.

I have roon sourcing music from the NAS and outputting to HQ player. However need help on how to get the audio to the Oppo.

Look forward to the feedback.

Oppo aren’t a RoonReady partner, so I don’t think you can directly connect Roon to it as a networked zone, unless possibly it supports airplay and you’re happy with that kind of setup.

You’d need an intermediate network adapter that’s RoonReady (or something you can run RoonBridge on), and supports the Oppos interface options. (Sorry, I’m not familiar with the device so don’t know what other inputs it has).

Could you connect your MacBook Air directly as a stopgap?

If he is using hqplayer then it is that that is sending the audio over the network so the oppo does not need to be Roon ready but able to receive from Hqplayer. I have no idea if the oppo can do that ot not.

I also have an Oppo 103, and for a while I used the Oppo’s USB DAC connection from my laptop to trial Roon.

I now run Roon on a sonicTransporter i5 with Schiit DAC and micorendu, so the Oppo is back on bluray duties

I do not think you can use it as a networked device with Roon.

Philr is correct. You need a device that can act as an NAA (an HQPlayer receiver). Something like the microrendu or the SOtM sMS-200 will do the trick. Connect them to your network, configure the NAA app on them, and connect their output to your Oppo via USB input. The Oppo can also act as a DLNA renderer, so products like JRiver can access an Oppo natively over a network with no intermediate devices but, of course, you lose the usability of Roon.

Consider adding a Network Audio appliance (like the Sonore SonicOrbiter). You can then connect from the output of the SonicOrbiter to the rear USB input of the Oppo (using its highest quality USB input). Music output by Roon/HQPlayer is sent over your network to the SonicOrbiter. See diagram below for how I do this with my own Oppo BDP-105D (generally outputting everything in DSD128. 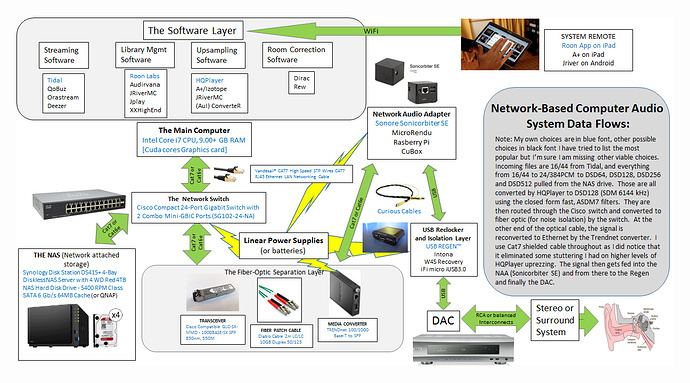 Thanks all for the feedback i’ll go the way sdolezalek recommend our hardware is almost identical and the SonicOrbiter is within my budget.

Mark, if you wanted a cheaper point of entry just to check things out, a raspberry pi or Cubox are good starting blocks - many of us have started using the super-slimmed down Dietpi OS. It’s free and pretty easy to install (super easy for RoonBridge on the pi now). I believe the HQPlayer NAA is on the verge of being added (if it’s not already). See this topic DietPi: creating a lean-and-mean Roon Bridge

The sonicorbiter is a stock Cubox, but with a custom OS. If you don’t need the os and are happy to install something like Dietpi then you can get a really affordable network>USB box. The pi is more limited for high sample rates because of the shared network/USB bus - but personally I’ve never had an issue with mine in terms of high-res files (I don’t use HQPlayer NAA, just RoonBridge).

[just looked up the oppo and seems it’s max sample rate is 192 so the pi would probably do, and if you upgrade later, you can use it in another room. Also just realised Dietpi isn’t on Cubox yet, but is on their radar. Odroid might be worth looking at too]

One nice thing about the Sonicorbiter is that it has HQPlayer NAA installed, so it is ready to go. For those of us not so good with software/firmware that’s worth the extra expense.

Mark: let me know if you have any issues as it took me a while to get everything right, but the sonic benefits are unbelievable of upsampling everything.

I believe the HQPlayer NAA is on the verge of being added (if it’s not already).

The Oppo 105D can be used as a USB DAC (plugged into a computer running Roon) but is not Roon Ready (it can play audio files from a network, but not via Roon’s interface). The new Oppo Sonica DAC supposedly has Roon Ready in progress but it is not going to be included on its initial release. Presumably either could be plugged into the Macbook via USB.

Depending on the Synology NAS you have, you may be able to run Roon server on it. If it has a 32 bit or otherwise underpowered CPU then it can only be used for storage, accessed by whatever you’re running Roon on.

The 105D is now discontinued, is unavailable directly from the company, and is selling for ridiculous prices on Amazon and eBay. It doesn’t look like they plan on releasing a new disk player with a premium audiophile quality DAC built in. I had thought of picking one up since my BDP-95 cannot be used as a USB DAC and my Benchmark only does up to 96K samples/second via USB, but it looks like now I’ll have to discontinue that plan, at least until the market for 105D’s settles.

Have you looked at the upcoming Oppo UDP-205? It is the 4K Blu-Ray version of the BDP-105D and last the very latest Sabre DAC chip in it. So, yes, Oppo is releasing a new disk player with a premium audiophile DAC, it just isn’t available to purchase yet. The UDP-203 is available and is the counterpart to the BDP-103.

I think there is a news blackout on the 205 specs until oppo have it close to release…this was the way the 203 specs happened too.

Sonica DAC will be a powerhouse and hard to beat…but for now no roon ready info is available rumoured to be coming but no black and white.

Hi sdolezalek
I’ve seen your posts on the oppo 105D.
I also have that unit and 3TB of music on a synology NAS. I’m looking at getting the micro Rendu as my Roon endpoint into the oppo USB dac. It seems you have used this set up. And tips? Suggestions? Is this a practical way to go?
And help would be appreciated before I make the purchase.
Thank you in advance
Dan

Daniel: I’m using the SonicOrbiter (not the MicroRendu) in my setup. I’m actively considering switching to the UltraRendu but I’m also trying to decide whether to switch DACs to take advantage of DSD512 upsampling (which the Oppo UDP-205 can do).

I have put a fiber connection between my computer/NAS and the SonicOrbiter NAA running HQPlayer to further minimize any noise leaking from either one into the DAC. That allowed me to go with a more powerful (but also slightly noisier, due to its power supply) computer that makes upsampling easier.

Thank you very much for the reply.
This does help a lot. Having never used the USB dac I’m curious what the sound quality improvement will be. When I give it a try I’ll let you know. I think the 105D will be enough for me. But if you do get a 205 Id like to hear your opinion.
Thanks again
Dan