I am a non-IT guy who enjoys good music and recently have acquired some new equipment and subscriptions (Sonore opticalRENDU, Uptone etherREGEN, Roon, Qobuz) to further my enjoyment of this hobby.

The current network system is rather basic, a default Huawei HS8145V5 smart gateway from the internet service provider (am in Shanghai) and a 2013 Apple AirPort Extreme serving as a wireless router. The reason I added the AirPort Extreme is because the Huawei HS8145V5 has a limit of 10 connections (home uses some 8 IoT, controlling heating, lighting, video camera, etc). 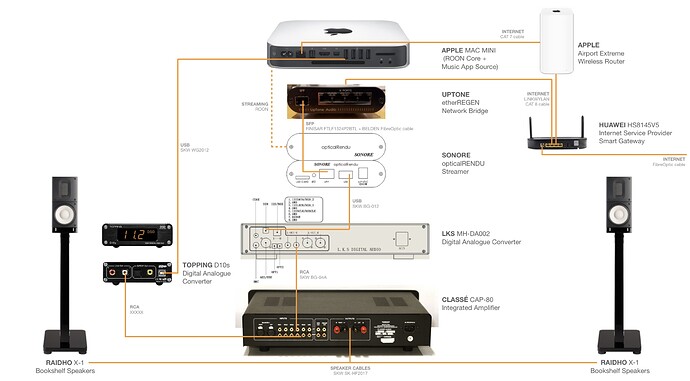 Recently, due to the experience of intermittent Qobuz playback via Roon, I realised that there could be a lack of bandwidth in this set up, thus have me thinking of planning an upgrade.

One of the initial consideration is to replace the Apple AirPort Extreme. Due to my lack of knowledge in this specialised discipline, I am not sure if this is the best solution in long term. There are several questions in my head, eg, can I swap away the Huawei HS8145V5 with a better piece of equipment without affecting the performance (probably i should consult someone within China)? what are the better wireless router that will give me the best speed and bandwidth? Will adding a switch after the Huawei equipment help? how I should plan my upgrade to optimise the sonic performance as well as basic usability of having a dedicated VPN within the network (downloading and uploading of files and view contents from overseas servers)? etc

Anyone input is greatly appreciated. Thank you.

When both Mac mini & the uptone etherREGEN are both directly connected to the apple AirPort express, Roon somehow cannot detect the opticalRENDU.

When I start up Roon, I will contact both Mac mini and the etherREGEN directly to the Huawei. This will allow opticalRENDU to be detected by Roon. However, this will exhibit far worse intermittent during playback in Qobuz, often displaying 2 types of issues.
A) “Unable to start streaming. Check your Qobuz account and try again. Too many failures. Stopping playback.”;
B) “Qobuz media is loading slowly. This may indicate a networking or connectivity problem.”
Issue B is more prevalent now, occur at higher frequency, making Qobuz playback via Roon a torture.

To avoid the above issue, after Roon detects the opticalRENDU, i will plug out the cat7 cable from Mac mini and plug into the apple AirPort Extreme. This allows me play Qobuz via Roon with much less of the issue B mentioned above. Often occurring late in the evening and plays flawlessly in the day time most of the time. However, whenever I restart the Roon app on the Mac mini, I need to reconnect the cat 7 cable back to the Huawei to be detected. Once that is established, I will plug out the cat 7 cable from the Huawei and plug it into the AirPort Extreme.

Not sure if this is unusual but so far this works best for me at the moment.

For the purposed of problem determination, you need to simplify your setup as much as you can. I would focus on the etherREGEN and macmini both connected to the Huawei (and why this doesn’t work 100% reliably 100% of the time).

If that works perfectly well playing Qobuz during the day and then starts to go wrong in the evening, this would indicate “a change” and this may be key. Perhaps there is an increase in network traffic inside the home that causes the Huawei to struggle with the load?

Perhaps your ISP is struggling when everyone finishes work and starts using the internet more?
Are your IOT devices more active in the evening than in the day?
Do you definitely have the wifi switched off on the Huawei so only the airport is handling the wifi?
When did the problem start happening. All of a sudden or gradually getting worse?
What if you switch off the airport and all IOT devices in the evening, does the problem still occur (while sitting in the cold and the dark)?

All these questions are just to promote thought on the root cause of the problem and what we can say is or isn’t a contributing factor.

Even a basic ISP router should be able to handle Qobuz streaming unless it is also overloaded with work/traffic from the rest of the home. Free ISP “all in one” routers can generally only handle a limited amount of traffic before the processor becomes overloaded. If you have 8 IOT devices AND multiple computers and other devices accessing the internet then, yes it might be struggling but you can only prove this through a process of elimination.

I’d also suggest (if you have some spare) to try basic cat5 cables (rather that cat7/8 cables) just to simplify and eliminate “variables”. As an example, I recently discovered that one of my internal network connections was only running at 100mbs instead of 1GB due to a hard bend in the cable that had damaged the conductors.

I can’t really comment on why when both Mac mini & the etherREGEN are both directly connected to the apple AirPort express, Roon somehow cannot detect the opticalRENDU.. except to make sure you only use the the top 3 x LAN ports and not the bottom WAN port.

Hopefully a few things to help consider what to do next.

For the purposed of problem determination, you need to simplify your setup as much as you can. I would focus on the etherREGEN and macmini both connected to the Huawei (and why this doesn’t work 100% reliably 100% of the time).

Have been doing this past few days, problem is still around, though less frequent now. It happens during the day and night. Due to the Lunar Chinese New Year holidays, I have been home and I supposed more of the neighbors are at home during the day and night as well. I guess I have to observe longer to get more accurate observations on the ISP and IoT.

At the same time, I am getting an affordable better wireless router, eg. xiaomi AIoT AX3600 to see if it will help to address the issues I am facing. Your suggestion to bypass the Huawei’s wifi function is something I have to try.

I wish I can do better than a simple Thank you. I am really grateful of your kind patience to help to break down the possible issues I may be expriencing. Thank you once again.

You are most welcome. I hope the new router helps improve the situation for you.