I have enjoyed using HQ Player upsampling engine for many years in conjunction with Roon’s great exploratory-centric UI. HQ Player has always been able to play music directly and I’ve tried it a few times and always marvelled at the sound quality in comparison to using Roon to play ‘through’ HQ Player.

Very recently, HQ Player has added the ability to play direct from Qobuz and once again I tried it out. It really does sound fabulous - best digital sound I’ve ever managed to extract from my system. My aim here is not to kick of another pointless debate but rather to ask whether it could be worth Jussi and the Roon team having a chat and extending their cooperation beyond endpoint connections and into entire signal chain?

I fully appreciate that there are a lot of variables and possible reasons but with decent kit the difference is marked and on my system marks the difference between Dar Williams being at home or out shopping and actually singing away in my living room (what will my wife say!!)

I didn’t set out to get on a soapbox. I was just trying this new feature of HQP…the Mac mini m1 that HQP is running on is not optimised in anyway and is doing a bunch of other stuff whilst playing tracks. It’s also the same Mac mini that I play HQP through from Roon so I’m trying to keep the chain as consistent as possible.

You should add a second button to vote “NO”.
It would be easier than explaining that may be it is be a poor idea?

Question for you - do you use an NAA endpoint between your HQP server (M1) and DAC or run directly?

I am struggling to understand how the same data streamed directly from Qobuz → HQP vs indirectly from Qobuz → Roon → HQP could sound different, particularly if either HQP is on a dedicated box or if using an NAA. (standard assumptions apply - all dsp turned off in Roon, same bitrate being sent from Qobuz, etc). If on the same server that is directly connected to a DAC then I could be convinced … thus my question.

Fair question and to be honest, me too.

My signal chain is:

There are plenty of reports of different playback software sounding slightly different and I’ve experimented with quite a few so I am assuming that it is a similar phenomena. In terms of subjective reporting: we’re not talking night and day but textures of cymbals, drums, trumpet and sax being better defined. More layering in the soundstage …

Yep my point wasn’t to get into this debate (that has been discussed ad nauseam). Just wanted to clarify your chain as I read various anecdotal reports on the SQ of Qobuz direct to HQP. I doubt @jussi_laako would suggest that Qobuz streamed directly into HQP would sound different than Qobuz → Roon → HQP, if separated from the same downstream NAA, but maybe I am wrong …

I bet the people from Roon ignore this thread

Interesting - I can certainly corroberate this. It has never made much sense to me that streaming content around a network in different ways should make any difference to the sound and I’ve even gone to the lengths of trying to ensure that I’m volume matching etc (because the volume out of Roon and HQP client is different) so perhaps that’s not the whole story…perhaps it’s the software itself.

I’d be genuinely interested in how you managed to accurately do that, please!

I can’t speak for @crom but I have used a simple SPL meter & pink noise file with success when volume matching.

Looking at your DSP setup perhaps you won’t class this as accurate Marin and I’m all ears for a better way. I initially had a free iPhone app that measured average sound pressure. This piqued my interest enough to investigate further so I set up the measuring mic that I use with Audiolense and used that. I listen to the tracks using either ‘signal paths’ work out what the volume should be set to…as I said basic but ok for me.

The only practical way this could happen is if Roon bought HQPlayer source code and incorporated the core functionality, mainly up-sampling and DSD, into Roon.

I also tried the HQPlayer client with Qobuz but I didn’t notice any SQ changes. As far as I can see, the only reason HQPlayer client could sound better than Roon playing to HQPlayer is if HQPlayer client is lighter on CPU/memory and hence produce less electronic noise. But this will only affect SQ if your DAC isn’t isolated from your computer (direct USB or copper ethernet cable). I use fiber so I have 100% isolation to the computer (even different main grid power).

I set up the measuring mic that I use with Audiolense and used that. I listen to the tracks using either ‘signal paths’ work out what the volume should be

True, probably not accurate enough, better use a DVM in AC RMS mode and measure i.e. 1kHz sine wave at amplifier output to match to the mV.

The only practical way this could happen is if Roon bought HQPlayer source code and incorporated the core functionality, mainly up-sampling and DSD, into Roon.

I selected the Vote button assuming I would be presented with some stats or options menu, nope I guess I just voted for this and it wasn’t my intention.

However, I am a long time HQP user as well and use a dedicated roon server, dedicated HQP wkst and separate NAA… There is a difference. Having it directly integrated is a complex affair and don’t see that happening.

I guess I just voted for this and it wasn’t my intention.

In case you didn’t know, you can always withdraw your vote.

I have just spent an evening playing tracks from Roon and then on the HQPlayer client. The latter is just…better! Anyway, I was just shutting down as it’s getting late when I came across this setting in HQPlayer client’s interface. Maybe this is the key?? I can’t instantly find out what it does but assuming that it’s something to do with buffering…ie download the track before playing to cut down on network traffic…anyway, no idea but speculating at this point. 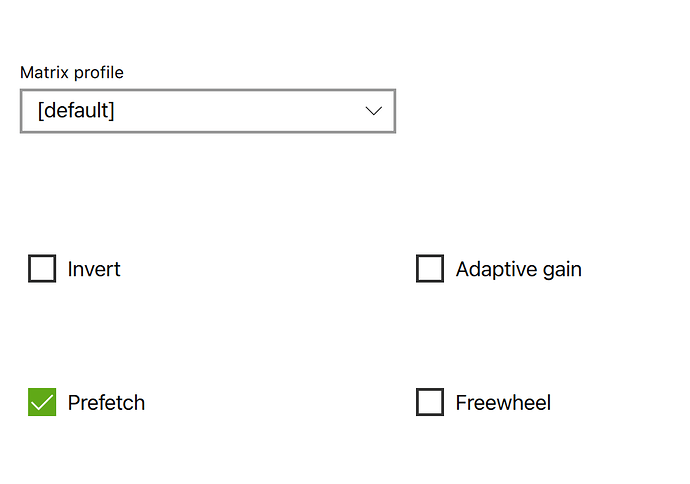 I believe I updated the manual regarding these…

But anyway, Prefetch begins fetching next track 10 seconds before end of the current one. And with the default settings stays roughly 10 seconds ahead of the playback position all the time.

Freewheel let’s the fetcher loose and pulls the entire track as full speed. Which is not enabled by default since it may cause issues due to the heavy traffic spike.

Thanks for the clarification Jussi. I was reading the manual from 4.15.0 (as that’s what I happened to have in my desktop) so it may have been updated in a subsequent version.

I’ve just checked and searched for freewheel and prefetch in 4.15.4 manual - not present.

I’ve just checked and searched for freewheel and prefetch in 4.15.4 manual - not present.

Strange, I just checked and it is certainly there, on page 36…