Option to resume album where you left off

I would really appreciate this feature. I know you can see how far you made it into an album in your Queue, but what if you listened to half an album last week, or last month? In that case, it would be nice if you had the option to resume right where you left off.

You could save the remainder of the album as a playlist. A bit fiddly, but better than nothing.

I usually look at the track playcount. When the playcount is one less than the previous track, that’s where I left off. Won’t work of course if at one point you put some of the songs in a random playlist. Alternatively you can lookup the album in your history.

Thanks, I hadn’t even noticed the playcount in album view. Also, if you hover your cursor over it, you can see the last time a track was played.

Cool, I actually didn’t know about the info popup showing the last time a track was played. I learned something too.

Is there a way to do this on a tablet? I can’t seem to get last time played to show on my iPad.

On a tablet, a long press should do the same thing as a mouse hover…

A long press on the play count just selects/highlights the track. I don’t see anything saying when it was last played. 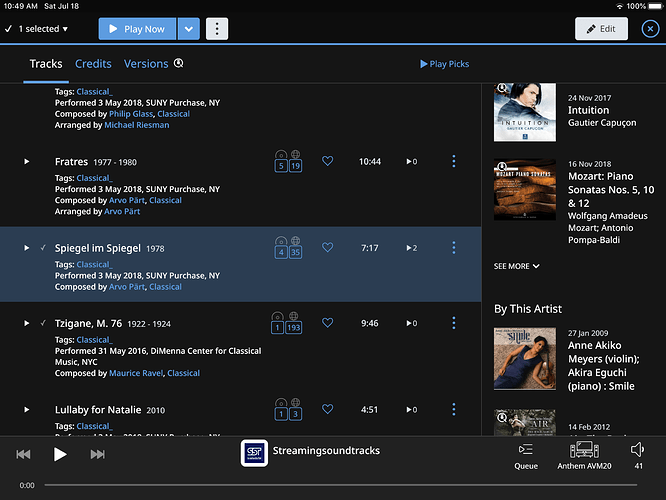 Interesting - on a Windows tablet it does show the date when last played.

I think a windows tablet runs a full windows client so is in effect the pc not the tablet version.

On the Mac version long press on the play count also just selects the track, nothing about when last played

Last month? Last week? Why not listen again from the beginning?
Better understanding/appreciation of the track may be adverse to this practice…

I think this is a good idea. I like to listen to full albums, but many times get disrupted before getting to the end. Next time, I might want to listen to a different album, but come back to the first one later. It would be good to have two “play now” buttons. One would “play now from beginning” and one would “play now from last stop” or something such as that. Of all my albums, I’ll bet I’ve listened to the first half of each album way more than the last half of each album. I would rather not have to hunt for where that is based on play counts, etc.

Thanks for this tip! Like others, I never even thought about using play count as a quick way to pick back up where I left off. I came here to request a “left off” feature but this method works perfectly.