I went thru the multiple forums, blogs related to the topic of organizing music files. Most of them are very basic… (discuss the itunes, windows folder structure etc…) I am looking for more sophisticated solution… basically I am looking for a design of physical directory structures on storage (zfs/ext4, etc).

Each root dir contains subdirs as:

The issue with that concept is that I albums of specific artist will be store in different directories based on the quality of the files.

The better approach would be to have a root folder

and symlink albums based on the quality into the root folders described above. The bottleneck is too many symlinking and manual intervention.

I was also thinking about other solution using tags https://github.com/oniony/TMSU . The idea is to have everything stored using the dir pattern as below and instead of symlinking the files into “root” dirs mentioned abouve … to tag the dirs based on the sound quality. This solution will require lot of tagging and it will be dependant on TMSU which is already maintained by one developer.

I know that roon can easily use metadata and handle my lib fine but I wanted to somehow sort the files on the physical level (directories on FS) also.

Any ideas are welcome.

You could embed the “quality” information into the Album Name and add an extra album name to keep them tidy.

Hi,
yeah thats one of the solution i was thinking about. The issue is if you dont use only roon and want to play lets say 24b_MCH … it will be hard to identify those albums on filesystem.

Since this kind of thing can become infinitely complex, I suggest outlining the scenarios you want to address.

If you say “future-proofing, to accommodate anything that might cone up in the future” the solution will be very complex.

What I did: never mind to the whole thing, put everything under \Music. Most look like
\Music\Artist\Album
because that’s the default of some downloads and dBPowersmp, but some have a disk number inserted, and some downloads skip the artist name. I don’t care because Roon identifies the stuff well enough anyway.

I have identified one unexpected problem of this: I got a car with a Burmester system (excellent) that only accepts up to 48 kHz, and when I downsample my hires stuff I want to stay within power-of-2 family, downres 95k to 48 and 88k to 44. Not convenient for me.

The problem is, it is hard to identify every future case.

Hi,
well yes, roon can do selection based on the bitrate etc… My “future” scenario is simple, i have some rips as iso which cant be played by roon, i playback those via OSMC. I wanted to have all the albums by artist X inside the structure X\album1,album2 etc… If I want to identify those iso albums it should be nice to have folder as music\24bISO\ and some links from main dir into it as music\24bitISO\X\albumN

Maybe i am making things more complicated as they are. 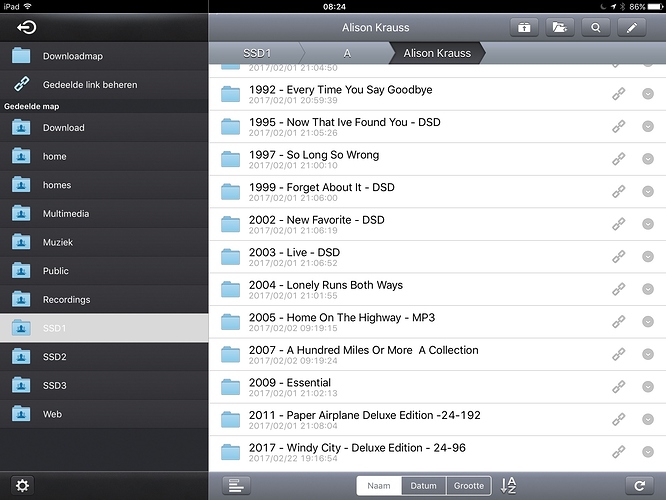