Probably me having a senior moment, but ever since I can remember the ‘Overview’ and ‘Recent Activity’ section had ‘Played’ and ‘Added’ options. I’m absolutely positive the ‘Played’ section just showed the albums I had played.

For some reason today it’s now showing individual tracks separately and not just the album.
Am I going mad?

I’m certain I’ve not changed anything in the options, and it doesn’t appear as though there’s been a roon update.

Anyone else noticed this?

No change on my end, Recent Activity still has Played Added.

Cheers Mike!
Apologies but I don’t think my explanation is clear. If I choose the ‘Played’ option it always only ever showed the album I had just played (never each track). Now it’s showing every single track played from the album.

That’s it Jim! (I knew I wasn’t going mad).
I wonder why this has changed to single tracks (that also have a play icon on them too) from the album now instead of just the album.

Ok, got it. When I play albums the cover icon is listed once but if I execute a playlist with albums then I get duplicate cover icons. 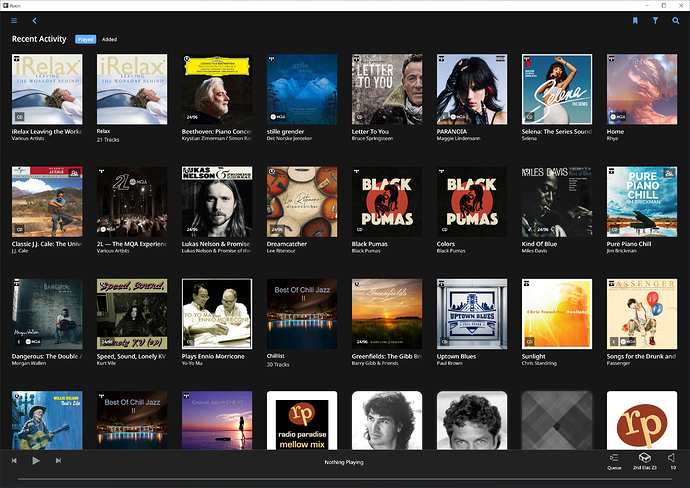 I quite looking at Recent Activity Played because it did seem to be out of whack. Mine shows IRelax twice playing the album from a playlist but not everything that was played.

Now it’s reverted back to showing album only and not individual tracks.