There is a problem with this 3 disc album metadata streamed from Quobuz. The sonatas on disc 2 & 3 are correctly recognised as individual compositions e.g one composition per sonata. On disc 1 however the op 2 sonatas are grouped together as single composition “Piano Sonatas (3) Op. 2”. Can this be corrected?

A general question relating to the above - I have finally worked out how to get Roon to recognise individual compositions on ripped albums where it has not done so by itself. How can I do the same for streamed albums, given that I don’t have the option of altering track names and using work & part fields? Or are we always dependent on correction at source?

But there are things you can do.

Unfortunately this will NOT work to day. But sometimes it does and if it is important to you it is worth trying this with 2 or 3 tracks to see if roon starts formatting correctly. If it doesn’t after 2 or 3 tracks. Stop. 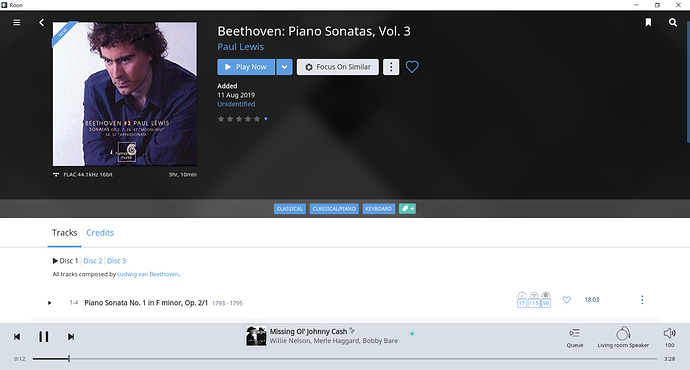 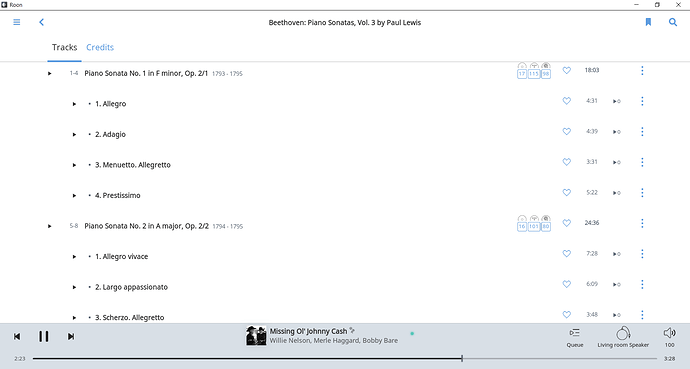 One thing that I don’t understand is that when roon parses the work titles in the identified state and in the unidentified state it ends up with such different results. It is almost as if completely different parsing rules are used in each case.

Thanks for the suggestion. I have now tried modifying the track titles of one sonata to match the canonical version. This involved changing “Piano Sonatas, Op. 2: No. 2 in A major. 1. Allegro vivace” to “Piano Sonata No. 2 in A major, Op. 2/2: 1. Allegro vivace”. Unfortunately this has caused Roon to make all tracks “unavailable” on all 3 discs, not just disc 1. The tracks remain “unavailable” whether I unidentify the disc or identify again with the appropriate album. I have only been able to go back to where we were at the beginning by deleting and then adding back to the library.
I am rather hoping that this could be fixed at source. There is obviously a problem with the metadata on disc 1, given that disc 2 & 3 are fine.
Thanks again

I think there is a misunderstanding. Using the unidentify method, I didn’t edit the titles of any of the tracks. All I did was:

At no point did I edit any of the titles.

I can imagine that it might be necessary to “merge” any compositions that roon fails to auto-identify on step 2, but this was not necessary in my case.

Maybe there is a difference also between Qobuz territories. I am registered with Qobuz Ireland.

My mistake. I have now followed your suggestion to unidentify the album, and update the composer credit for each track. That split the op. 2 sonatas into 3. Interestingly, only op.2/2 was fully recognised as a composition because I did not have the other 2 sonatas in my library. So, as soon as I added another album with those three sonatas, I then got all 3 sonatas in the Lewis album recognised. I don’t understand why the composition check cannot be done from the Quobuz album database, rather than Quobuz albums added with no modification to my library. What am I missing? It makes the process very cumbersome.

Thanks anyway, as this has essentially sorted my problem.

For Roon support, please can you investigate the metadata anomaly, so that this album is handled properly?

Interestingly, only op.2/2 was fully recognised as a composition because I did not have the other 2 sonatas in my library.

This is another bone of contention with roon going back years. Roon will only identify a composition in roon if you have another locally identified performance. This rule seems to be implemented the same whether you have a streaming subscription or not.

There are a long list of meta-data handling quirks like this which are roon design choices not necessarily poor up-stream metadata (box-sets anyone?). There have been attempts to group the feature requests under single threads to improve visibility. But I don’t think the practical work-arounds have ever been grouped together. There are probably quite a few by now. However, if you are an optimistic person I have the impression from a few posts that roon does recognise that the meta-data processing requirements of mostly Classical, Jazz and specialist Pop collectors are long overdue.

After an initial burst of activity several years ago to make roon usable with Classical,