Back in the day, Quad had an interesting approach to tone controls.
Instead of the usual bass and treble, they had a Tilt control and a Loudness control.

Loudness is a bit like cranking up both bass and treble, except these days bass and treble are usually far out on the spectrum and leave a big gap in the middle. It’s useful, for low volume listening or for effects. And the negative is “presence”, good for speech. Center point would be selectable, and the V vs. U sharpness in the middle is effectively Q.

More interesting is the tilt. It tilts the entire spectrum in a straight line. In a parametric system, it would tilt around a selectable center point. It is quite useful, and kind of a hassle to emulate with the existing controls. Think about how often you see people talking about equalizing speakers or headphones to a suitable downward treble tilt, for example.

I know that DSP and PEQ were not intended as tone controls, but since they can easily do that, why not? There are already people discussing how to do a house curve and other effects.

Meridian also use Tilt and time delay in Balance.

If we can save preset PEQ filters, maybe we could exchange them ?

Even posting an image of what we’re using might be a helpful start though.

The main thing I need to control is recordings that attempt to remove the enamel from my teeth. I want to reduce the treble I suppose would be the old tone controls term.

The other issue most people might want is a bass uplift which I can do with my sub.

I find the various threads on Room eq a bit above my capabilities and I do find it hard to understand the various options in the PEQ. However this is my first working attempt that actually made Brothers in Arms and Born in the USA much more listenable. 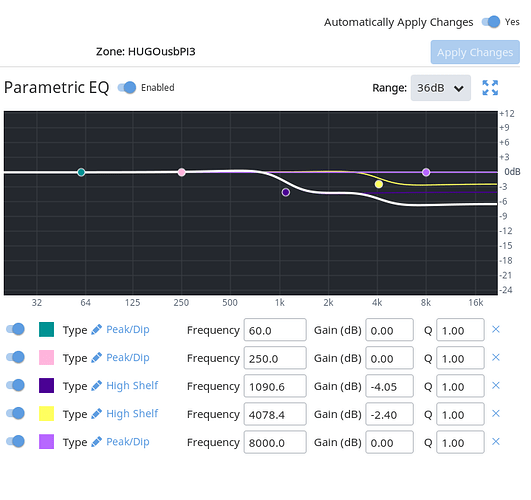 I’m sure I’m probably making some basic mistakes here but it’s my contribution to getting the ball rolling.

What does the Q value do?

I am listening to a lot of music and don’t feel the need to bother with EQ. It just sounds great. I am using Meridian MS200,S and Meridian Hi Fi.
Thoughts, Chris

What does the Q value do?

Q factor, also called Quality factor controls the bandwidth or the number of frequencies that will be affected by the filter. Larger Q factors would lead to steeper slopes, faster roll-offs.

For example, if you want to use a shelf filter and want the treble to fall faster over as smaller range of frequencies you will use higher Q values.

In the example above, I think you are trying to get a slow, linear roll-off between 1K and 16K dropping by 6dB. I think it can be done by a single High-shel filter, try a Q of 0.7 to begin with.

Thats pretty much a big drop in the treble , your room does that naturally , rolls off HF unless its very lively

What I would do is implement a -3db to -5db db dip centred around 3khz , q around 1.5-2.5
that should cure the harsh treble without affecting the air the extreme treble gives you.
Just guideline settings , mess while you listen to fine tune

Thanks Rodney, as you surmised I had not idea what I was doing with the previous setting, just pressing buttons until the brittle nature of some recordings was attenuated somewhat.

After a bit of testing i came up with the following

which does the attenuation without sucking as much life out of the track.

working well so far with these tracks

Sharing PEQ filters would be a great idea for headphones users in particular (I use lots of EQ with my HD800), where of course there’s no room interaction to make each EQ curve unique.