With more and more source content phase inverted would like to ask Roon if it would be possible to:

There is a manual setting in the DSP section, is that enough ? 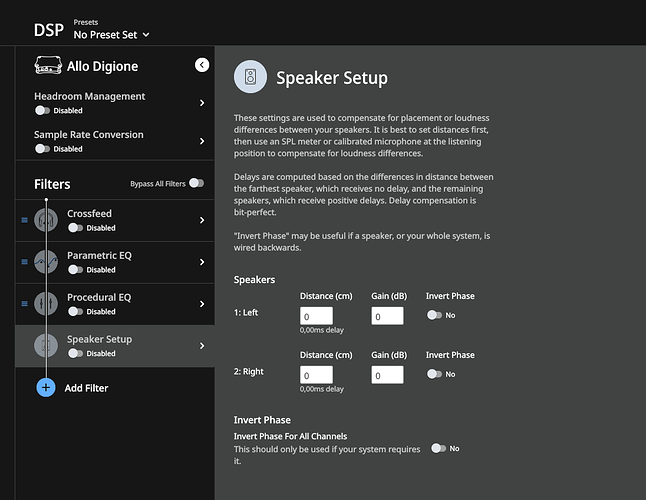 Oops I believe it is, I wasn’t aware of that, thank you

My first time posting here (I think). First, let me say I am a walking/talking Roon commercial, wherever and whenever possible praising Roon’s ease of use for music library functions.

Please humor me while I describe an event Re. absolute polarity, that well demonstrates the degree to which it affects performance. (I have been a supporter of “correct” polarity since I discovered it in the 1980s.)

This occurred @ our active music display room @ 2018 Rocky Mountain Audio Fest. A music lover I’ll call X enjoyed our sound for an extended period, so much so that X returned the following day with his spouse in tow. X is a classical violinist, his spouse a classical music singer. At the time X worked for Microsoft, and he authors an amateur high end blog.

On X’s second visit he brought a thumb drive with a DSD program comprising a landmark performance of a renown classical violinist, audio quality among the best I’ve ever heard.

About half the time, just by listening, I can accurately predict if/when a certain music program plays with inverted polarity. While listening to X’s thumb drive, I would have bet $100 cash, maybe even more, this program was inverted (because everything in this chain especially the program was such high resolution). I knew we were missing a lot of performance, so I had to politely suggest inverting the signal to my partner in the room, in the middle of the listening session.

We did not have Roon (I have known since day 1 about Roon’s inverting feature), and it took my partner about 45-60S to invert the signal (reboot player, etc.) I was standing behind X. Correcting the polarity improved the experience to such high degree I would struggle to find an analogy to describe it. Most of the several people in the room made involuntary verbal reaction. X, seated in front of me standing, turned slowly back to look at me with a look on his face that did not require words. To me, his look said, “How on earth could you have known that, and how could that transform the performance to that degree?”

We shared our room with an expert and successful pro analog/digital engineer who makes DACs and a super high value server/streamer. Based on our shared experiences in our room, he planned to add (and may have even now released) a feature for his player, whereby the user can listen once to any streamed music program, determine by listening what is the “correct” polarity, and his player would remember and pre-select that choice every time that music plays from that streaming source. (Note: it’s possible that a different streaming source playing the same music program could have different polarity. Any/every time ones and zeros are handled/processed, they are subject to being inverted.)

I implore Roon, if possible, to add the above described memory function for absolute polarity.

Just try inverting absolute polarity right now with some of your favorite programs, and measure your results. A small ratio of programs make little to no audible difference. Some listeners and some speakers are more sensitive than others to the difference. In other cases the difference is profound (see my story above).

Inverted tends to sound like the soloist, vocalist is stuck in the box, like their back faces the microphone. Correcting it makes the music project out of the box, flow is improved, even more wood tone for string family instruments (esp. soloist). Often the bass is a good tell, sounding more dynamic and punchy when correct, and again, more wood tone for double bass.

I love Roon and prefer to continue using it, AND it sure would be welcome to have a memory feature for absolute polarity instead of manually checking every time. Roon has obviously already well established that it owns the world for ease of library functions. For certain picky listeners, such memory feature for absolute polarity just furthers the case for Roon’s continued dominance.

No opinion on the feature request. But any request needs the commitment of resources etc and this sounds like quite a complicated request, coding the analysis, adding a dB entry to track etc.
If the only audience is “For certain picky listeners” it’s not a compelling case Vs other requests.

I agree with Ged. Most people won’t be able to hear the difference and if they can won’t care. It would be an involved feature to add and I believe Roon is many years away from running out of more ‘valuable’ feature requests.

I don’t mean to diminish your request, I simply believe it won’t be valued by many.

That said, I very much like that my DAC has an absolute polarity button on the remote. Each and every track that plays can be different. Is the difference mind blowing…its subtle for me but I unquestionably hear the difference.

A simple enhancement would be to add the invert polarity option to the playback controls so users could invert at will.

This post probably seems like I’m questioning the audibility of both polarities. Trust me - that is not my intention.
(Full disclosure : I confirm that polarity reversals can be heard. The reason why may be another story, and not the discussion here)

Intention is better descibed as : I’d like to understand the technical meaning, of what you are asking. That should be helpful in getting a technical solution.
I have a few questions :

Or, when speaking of non-amplified performances : are persons behind a bass drum, or the player himself, experiencing an inverted version of reality ?
What do we mean by correct or absolute polarity ?

Oh @James_Romeyn : A very warm welcome here, and I am really sorry to make fun of a snippet of yours. It’s an opportunity I cannot resist

. Hope you understand. If not, please accept my sincerest apologies. I really do understand what you wrote, and don’t disagree with the essence of it.

About half the time, just by listening, I can accurately predict if/when a certain music program plays with inverted polarity.

If you really did mean to write it down like that : Did you know that birth genders are predictable too ? About half of the time, just by looking at women’s bellies, I can accurately predict whether a boy or a girl crawls out whithin the next 9 months… ;-).

Btw, @evand his solution seems to be a practical one to me.

How does one quote here, with proper attribution to the member being quoted? Sorry if I missed the obvious!

Sorry if I missed the obvious!

Highlight the txt you wish to quote then click reply

I don’t think he’s asking for Roon to be able to determine the ‘correct phase’, rather just store the value he chooses for that track/album and make it so upon subsequent playback

Yup exactly like that. Or alternatively, you can click the reply button below my (or anyone’s) response, so it is clear what you are responding to.

Feel free to make fun of me, you deserve it

@Larry_Post : I do think that this is pointed out in his ’ point 1’, in the first point. Rightfully so. But, at least for me, not clear how that could be implemented.

The OP had thoughts of it being scanned

Through some statistics analysis or content pre scanning determine if the content is phase inverted and show that on the interface.

Ah, I didn’t catch that in the OP post. I was reading a few replies down.

I implore Roon, if possible, to add the above described memory function for absolute polarity.

A simple enhancement would be to add the invert polarity option to the playback controls so users could invert at will.

My Devialet amp has an invert button on the remote. I use it quite a lot. I believe Brian Luczkiewicz once said that a tag could be made to trigger invert in Roon (in a discussion about specific DSP for albums/tracks). As with many technical features in Roon, we haven’t seen it yet…

Oh, it’s so easy to quote that it went right over my head! Tx!

What does the phrase ‘correct phase’ actually mean ?

I’m familiar with the many potential meanings you list of “absolute polarity” for live music perceived by human beings. For our purposes, I would define it as the differences I listed earlier listening to one polarity vs. the opposite. In some/most cases, one outperforms the other. (Some speakers portray the differences more than others.)

Any time a recording is processed, unless someone meticulously documents it, the polarity of the output is not positively known vs. the polarity prior to the processing.

About half the time , just by listening, I can accurately predict if/when a certain music program plays with inverted polarity.

Situation 1:
I am listening and have not tested inverting the polarity for a preference; well call this polarity “NK” for not known. Later I test and find that I prefer U for un-inverted, as opposed to “I” for inverted.

Situation 2:
Same as above, except I later discover I prefer “I” inverted vs. U/un-inverted.

I am more likely to predict the eventual outcome, my eventual preference in Situation 2 than I am in Situation 1. In #1 I check just because I don’t know. In #2, I hear a problem and suspect it’s wrong with a level of certainty that varies.

In the DSD event I described above, I would have bet $100 it was “wrong” and would have won the bet. If it was correct when we first played it, I would never have bet.

I don’t know why this subject seems to push people’s buttons more than most.

The OP had thoughts of it being scanned

I have high certainty it’s not practical to pre-determine which polarity is preferred or “better.”

This is an audio test only AFAIK.

I don’t have the ability, but for those that do: listen to binaural on headphones only (especially those two young guys on YouTube who sing “Sound of Silence,” camera right IFO the mic, absolutely mind-blowing, mesmerizing) and invert polarity back/forth.

You are excused - this explanation makes much more sense. Not an exact discrimination,
but still something significant. And it most likely IS. [quote=“James_Romeyn, post:17, topic:86390”]
For our purposes, I would define it as the differences I listed earlier listening to one polarity vs. the opposite. In some/most cases, one outperforms the other. (Some speakers portray the differences more than others.)
[/quote]
I know that it wasn’t the subject of discussion, but I’ve highlighted what is the major cause, at least in my Informed opinion.
The question remains: what would be best choice, and it is that really generally the best choice for everyone or every system? (*). It is both a matter of preference, an a matter of how symmetrical your speakers can move around their zero position. Not something universally right or wrong, I’d say.

(*)= I guess that we both say NO to that last question. How should that be taken care of ? 'cause this is what the roob team would have to deal with…

I don’t think he’s asking for Roon to be able to determine the ‘correct phase’, rather just store the value he chooses for that track/album and make it so upon subsequent playback

IMO, there’s a certain ratio of listeners who would feel a strong pull toward a playback software with such feature, and possibly consider trading some of Roons unreal goodness for it.

Me, probably not, because Roon is so ephing easy to use, and Roon smartly allows me to swap polarity by pushing 3 or 4 buttons. (Hint, maybe make a semi-prominent polarity button visible while music plays, one click to audio bliss!)